Breaking
How To Get Your Startup Business Off The...
How To Create A COVID Safe Construction Site
How to Make a Good First Impression at...
Why Now Is A Good Time To Start...
Here’s Why Texas Instruments’ Stock Growing Almost 2x...
LinkedIn’s 50 Best Startups To Work For In...
3 Marketing Mistakes Holding You Back From Hitting...
Is The Matter In Our Universe Fundamentally Stable...
Majority Support Covid-19 Price Controls Says New Brookings...
Reimagined Pan-Mass Challenge Approaches $41M 2020 Fundraising Goal
Is Bitcoin Poised To Bounce Back After Its...
These ‘Temporary’ COVID-19 Changes Will Become Permanent
How Will Our Mental Health Be Affected By...
Selling A Business During A Pandemic: When Talented...
Top 10 Digital Transformation Trends For 2021
Two Veteran Entrepreneurs Aspire To Clean Up America’s...
PPP Forgiveness Applications Are Opening Up. Should You...
Best Domain Registrar
Free Tech For Black Founders Initiative Saves Startup...
Home Business Is This As Bad As It Will Get For Dufry And Lagardere?
Business

Is This As Bad As It Will Get For Dufry And Lagardere? 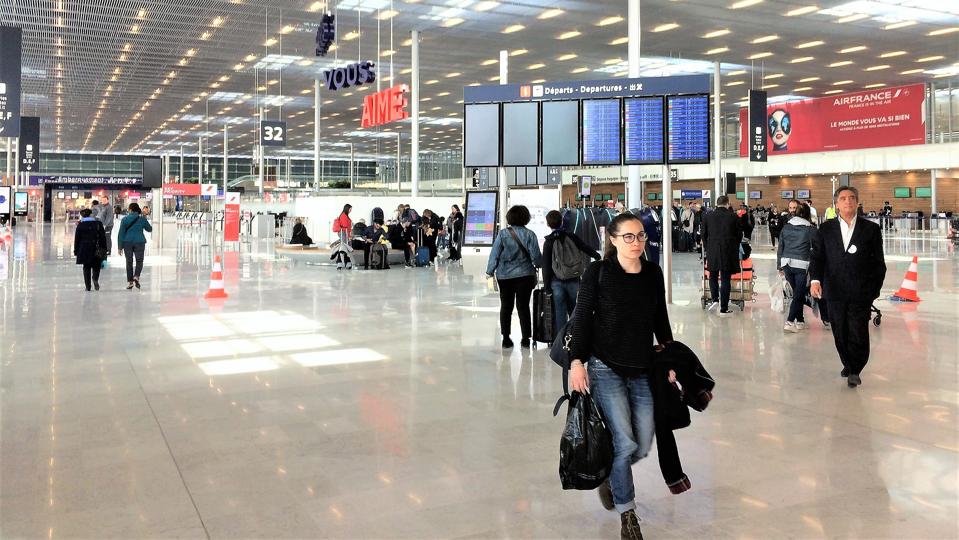 Back in the air: Lagardère Travel Retail is the key retail operator at Orly Airport. The gateway has … [+] been welcoming passengers again for just over a month.

Sales collapses of more than 55% in the first half for two of the biggest players in the global duty-free and travel retail space have led to temporary hits on share prices as a scramble to stem losses intensifies.

This morning, Dufry—whose best known retail fascias include Hudson and World Duty Free—announced a fall in turnover of more than 60% to Swiss francs 1.59 billion ($1.73 billion) due to the scarcity of traveling shoppers—mainly in airports, but also in rail stations and other travel environments such as cruise lines.

This has pushed the Swiss retailer to a ballooning operating loss of Swiss francs CHF933 million in the first half of 2020, versus a profit of Swiss francs 123 million in the same period last year. The variation in dollars is an eye-watering $1.15 billion. Dufry’s stock fell as much as 7.6% this morning on the news before making a full recovery.

The sales fall is closer to Dufry’s worst-case scenario planning of a 70% decline for the full-year 2020 than the best case of a 40% slide. While passenger flows have been gradually returning since mid-June, sales in July remained poor, down by 82% (compared to July 2019), albeit an improvement on April’s 94% plunge.

CEO of Dufry Group, Julián Díaz noted that while conditions are tough for the travel retail industry, more than 1,000 of its shops were back in operation in July. By the end of August, the company expects to have around 1,200 shops open—about half of its total estate—but representing 70% of sales capacity.

Dufry has also initiated cost-cutting measures with the aim of generating fixed cost savings of around Swiss francs 1 billion this year. Of this, almost one third will be in minimum annual guarantee reliefs from airport landlords. One of Dufry’s biggest negotiations in this area is expected to be with airport operator Aena in Spain.

A simplified organizational structure will be in place from September. Díaz said: “By taking out one organizational level, the teams covering our global functions and countries will increase efficiency and get closer to the market and our customers.”

How close to the market will Dufry be?

The new organization replaces a fairly well-defined geographical management structure with one that may not be quite as clear to some—in fact only North America remains an intact entity at the most senior executive level. So how that closeness to market plays out remains to be seen. However from a bureaucracy viewpoint the changes should at least increase Dufry’s agility and decision-making. 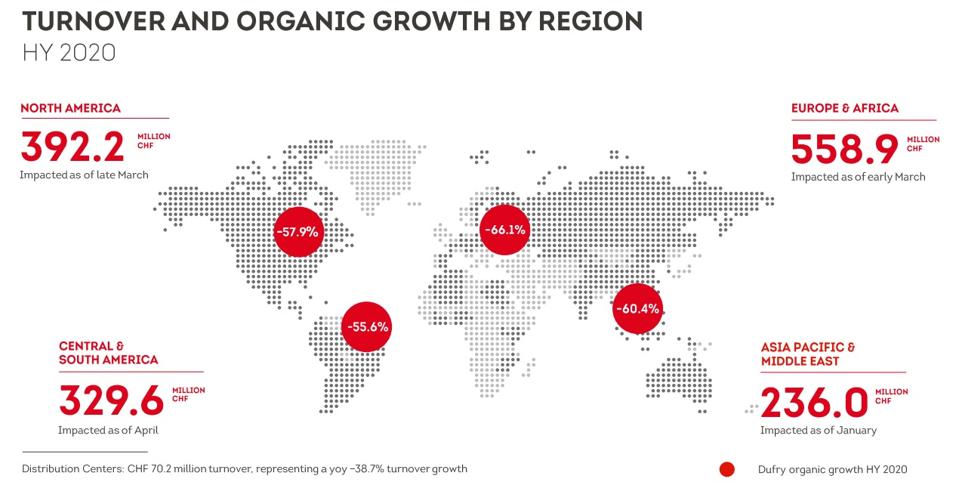 The duty-free market leader has not mentioned any specific retail initiatives to overcome the Covid-19 crisis but it has committed to increasing its small Asian footprint which is just 15% of turnover currently. Instead the company has slowed down its store refurbishment program to cut capital expenditure, but continued with projects which are likely to lead to sales opportunities.

Shops in London, U.K., Athens and Thessaloniki in Greece, Macau in Greater China, Guayaquil in Ecuador, and U.S. airport locations of Los Angeles and New York were all renewed. They cover 68,350 square feet or 1.4% of the overall retail space operated by Dufry.

In the first two months of the year the company also opened some new stores in airport locations in Helsinki, Finland; Perth, Australia; Indianapolis; Calgary, Canada; and Florianópolis, Brazil. These locations cover 0.6% of Dufry’s overall retail space. The company hopes these refurbishments and new openings will engage shopper interest and drive footfall.

Dufry’s French rival Lagardère Travel Retail did relatively better in the first half with like-for-like revenue down 55% to €947 million ($1.1 billion) but its parent company, Lagardere, also saw its share price tumble on the news before recovering.

Lagardère Travel Retail posted an operating loss of €209 million after recording a profit of €46 million in the same period in 2019. The variation of €255 million ($300 million) though significant is dwarfed by Dufry’s whopping $1.15 billion (see above). 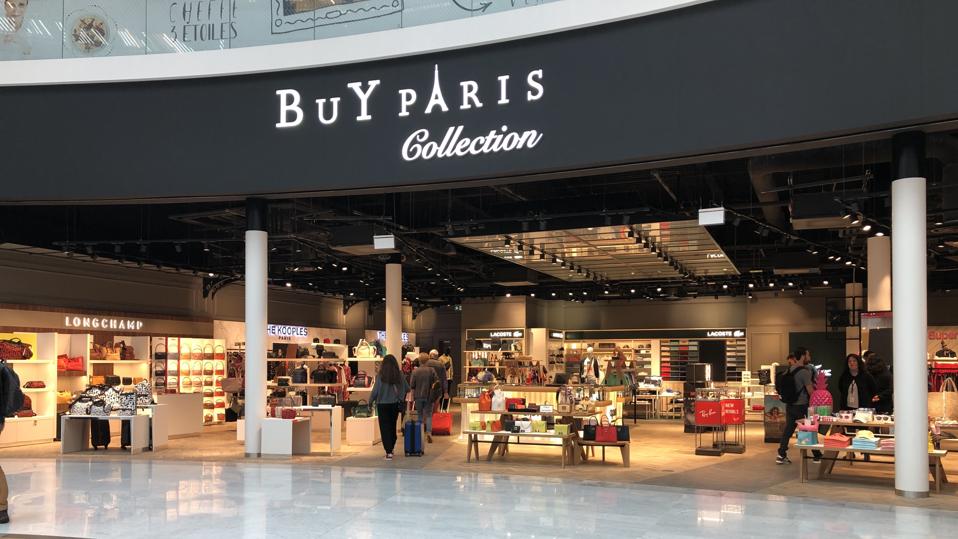 Like Dufry, Lagardère Travel Retail, has gradually restarted operations on what it calls a “bespoke” basis since April, in step with the reopening of railway stations and airports. A sales trough in April of minus 91%, is expected to reduce to around minus 65% once July numbers are in.

That relatively strong rebound has been helped by Lagardère Travel Retail’s exposure to China, the epicenter of the coronavirus pandemic, and to Asia-Pacific in general. Resilience in Mainland China, led to a revenue fall of just 0.7% year-on-year in the second quarter, helped by new 2019 openings, strong online and social media sales, and a resumption of domestic travel. Asia-Pacific revenue overall was down by 52% in the first half.

This compares well with other regions. First-half business in France slipped by almost 60%—not helped by strikes in early 2020; EMEA (excluding France) retreated by 53%; and North America contracted by 53.2%. In a statement the company said: “Short-term uncertainties as to when air travel will resume do not call into question (our) strong business model or leadership.”

The regional results compare well against rival Dufry even though the way the two companies split their regions is not exactly identical. Dufry’s most important division of Europe and Africa was off by 66% in the first half, while the second biggest region of North America was down by 58%. Central and South America was least affected, contracting 56%.

Quick off the mark

Last week, Lagardère Travel Retail also launched a new catering concept called Pick & Go available across its various store formats including duty free. In the Covid-19 era, the aim is to give travelers safe and easy access to a range of pre-packaged food products, including a menu for kids—while driving desperately-needed incremental revenue.

The range is an alternative to airline catering which most carriers and train operators have stopped due to the pandemic. 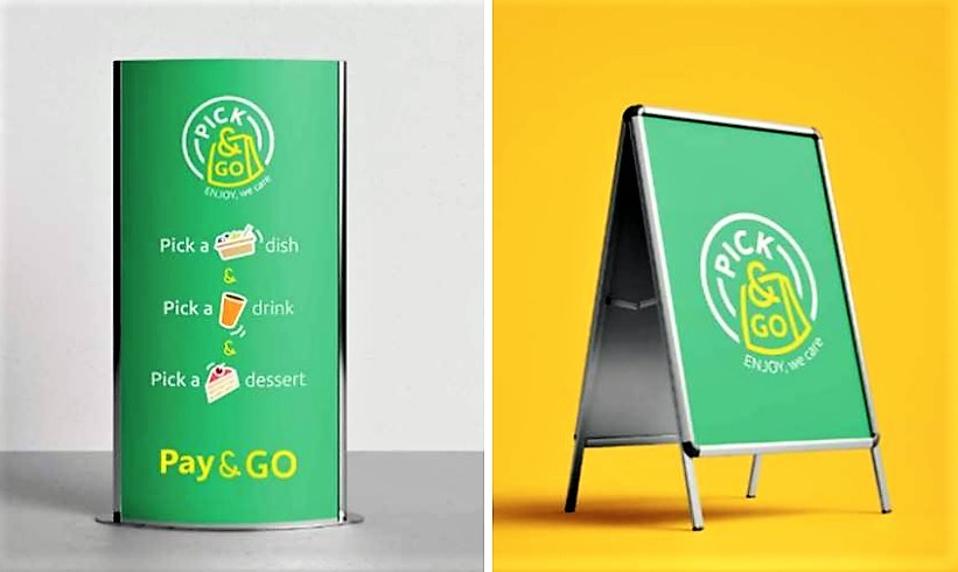 The Pick & Go concept gives travelers a quick alternative to on-board food which had been … [+] temporarily stopped due to Covid-19.

Mélanie Guilldou, Lagardère Travel Retail foodservice executive vice president, commented: “Pick & Go responds to the needs of customers who want a safe and affordable alternative to on-board catering, and of landlords who want to maximize the time passengers spend in airports and stations.”

The roll-out started in France on July 28, with “at least” 15 countries earmarked for the concept between now and October.

For both Dufry and Lagardère Travel Retail the second quarter will hopefully have seen the worst sales declines now out of the way. Although secondary Covid-19 spikes are being seen in the U.S. and new lockdowns are appearing around the world, travel has restarted in a small way.

Although not impossible, whole country lockdowns as seen from March through May, seem unlikely as governments opt for localized actions instead so that they can simultaneously attempt to invigorate their fragile economies. Travel quarantines will instead be a key determiner of vacation planning this summer—and duty-free spending in turn.