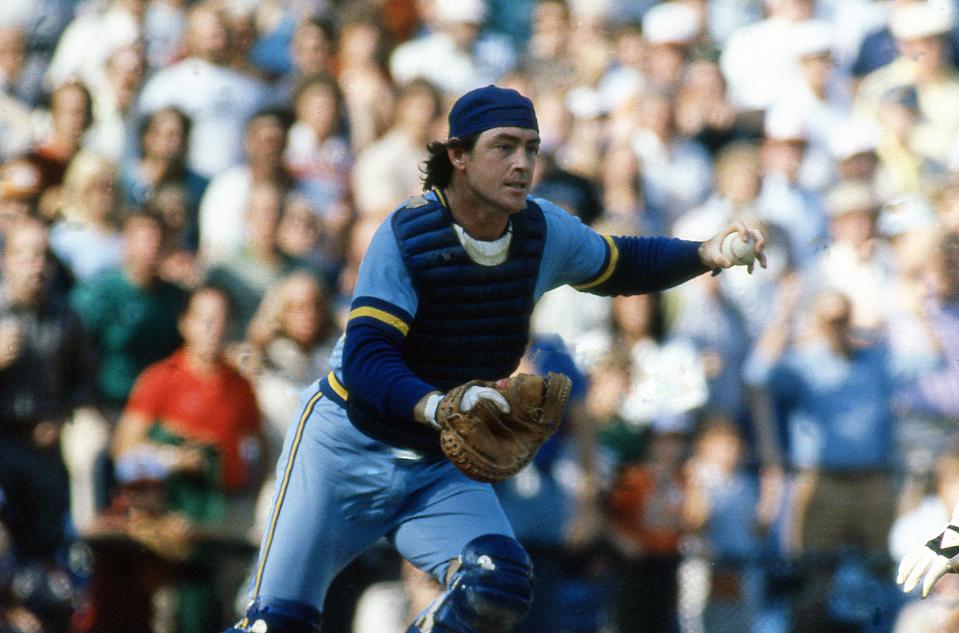 BALTIMORE, MD – CIRCA 1983: Ted Simmons of the Milwaukee Brewers against the Baltimore Orioles at … [+] Memorial Stadium circa 1983 in Baltimore, Maryland. (Photo by Owen C. Shaw/Getty Images)

Trying to figure out who will make the Baseball Hall of Fame via what amounts to the veterans committee is as murky as predicting who will gain election via the Baseball Writers Association of America is clear-cut.

More than 400 BBWAA members are eligible to cast a vote, which all but eliminates the possibility of a single voter or small group swinging the election one way or the other. There are exceptions to every rule — Nellie Fox missed out on being elected by two votes in 1985, his final year on the writer’s ballot, and Jim Bunning came up four votes shy in 1988, when nine voters submitted blank ballots to protest what they believed to be a lowering of the Hall’s standards — but there’s a reason we have to go back more than three decades for these outlier cases. And a new exception will not be presented in January, when one or two people will not keep Derek Jeter out of Cooperstown.

The extended eligibility of candidates also allows for a Hall of Fame case to build over time as the electorate turns over and/or gains a new perspective. Bert Blyleven, who won 287 big league games, recorded 3,701 strikeouts and threw 60 shutouts, received fewer than 20 percent in his first two years on the ballot, a span in which Don Sutton and Nolan Ryan became the third and fourth pitchers with 300 wins, 3,000 strikeouts and 50 shutouts elected since Blyleven retired in 1992. Blyleven got in on his 14th try in 2011, by which point it had become obvious there was no one on the horizon who would match the singularity of Blyleven’s achievements.

But the various incarnations of what are now various veterans committees lend themselves to the uncertainty that comes with a small sample size and the unpredictability of a ballot that is different on a yearly basis. The veterans committee has been redefined four times this century, with the most recent overhaul in 2016 establishing four eras and assigning each one a 16-member committee entrusted with voting privileges. A candidate must be named on 75 percent of the ballots in order to gain election — in other words, 12 votes, as opposed to the 300-plus votes a candidate needs to get in on the BBWAA ballot.

The Modern Baseball committee, focusing on players who made their marks from 1970 through 1987, meets today for the second time in three years, a span in which the electorate has undergone another seismic change. Only seven of the 16 men voting today were on the committee in 2017. Holdover Hall of Fame members George Brett, Rod Carew, Dennis Eckersley and Robin Yount are joined by returning executives Sandy Alderson and David Glass as well as historian Steve Hirdt.

So it’s probably folly to predict who, if anyone, amongst the group of Dwight Evans, Steve Garvey, Tommy John, Don Mattingly, Thurman Munson, Dale Murphy, Dave Parker, Ted Simmons, Lou Whitaker and Marvin Miller will gain election when the results are announced tonight at 8 PM, especially considering the cronyism that seemed to impact last December’s Today’s Game balloting — when Harold Baines’ manager and owner with the White Sox, Tony LaRussa and Jerry Reinsdorf, were on the committee — appears to be largely absent from this electorate.

Of course, what better folly is there than debating who does and doesn’t belong in the Baseball Hall of Fame? So even with all the unpredictability of the process, here’s one man’s stab at forecasting the three candidates most likely to earn election today.

—The closest thing to an obvious favorite on the ballot is Simmons, who received 11 votes in 2017. Simmons would seem to have an ally in Yount, who teamed up with Simmons to help the Brewers to the World Series in 1982. And if Simmons were enshrined, he would likely head into the Hall sporting a Cardinals cap in recognition of spending the prime years of his career with the club. Neither Cardinals icon Ozzie Smith nor former general manager Walt Jocketty intersected with Simmons in St. Louis, but both men are new to the Modern Baseball committee. Two familiar-ish faces can’t hurt a player needing to gain only one vote.

The election of Simmons would also serve to shine a light on an under-represented position. The Hall of Fame has just 15 catchers, a number not likely to be increased anytime soon by active or freshly retired players. Joe Mauer hung up the cleats in 2018 following a long sunset at first base and the only current catchers with a WAR of higher than 40 at Baseball-Reference.com are Buster Posey and Yadier Molina (oh, is that Molina debate ever going to be great and contentious in the late 2020s). Every Hall-eligible catcher with more WAR than Simmons (50.3) is in Cooperstown.

—Might there be two catchers elected tonight? Thurman Munson, the former Yankees captain who died in a plane crash 40 years ago, is on a veterans committee ballot for the first time. Munson never got as much as 16 percent of the vote in 15 years on the BBWAA ballot — 14 more appearances than Simmons, who was one-and-done in 1995 — but like Simmons, his Cooperstown case grows more impressive with time. In addition to winning two World Series as well as the AL Rookie of the Year in 1970 and the MVP in 1976, Munson had 46.1 WAR at the time of his death.

The committee features no ex-teammates of Munson, but plenty of his AL peers, most notably Brett, whose Royals fiercely battled the Yankees in the ALCS in 1976, 1977 and 1978. Jack O’Connell, a longtime Yankees beat writer, is also among the media newcomers on the committee.

—There could even be three men who played catcher elected. Dale Murphy shed his mask and chest protector for good following the 1979 season and moved to the outfield, where he spent the next eight seasons as one of the best players in baseball. Murphy won two MVPs (in 1982 and 1983) and five Gold Gloves from 1980 to 1987, a span in which he had the second-most homers (264), was tied for fifth in RBIs (768) and had the fifth-highest OPS (.891) among players to appear in at least 900 games. Speaking of games, no one played in more than Murphy (1,227). His peak was short of the decade-long run most associate with a Hall of Famer, but everyone tied with or ahead of Murphy in the aforementioned statistical categories is enshrined except Pedro Guerrero (third-highest OPS from 1980-87).

Murphy, who received seven votes or fewer in 2018, both has no obvious connections with the committee and every connection possible. None of his former teammates are on the committee, and the only writer who covered a Murphy team is newcomer Tracy Ringoslby, who was the Rockies beat reporter during Murphy’s final season in the bigs in 1993. But there is literally no one in baseball with a bad thing to say about Murphy, who is legendary for his kindness and clean-living nature. What better way to cleanse the pallet for the nose-pinching that’s going to take place starting next year — when Barry Bonds, Roger Clemens and Curt Schilling become the best players on the ballot following Jeter’s induction — than by electing Murphy this year?

And since we like to cover all our bases here #Puns, here’s a quick look at the other seven candidates, six of whom would not surprise us by receiving good news today.

—Steve Garvey, Don Mattingly and Dave Parker all received seven votes or fewer in 2018. But Garvey and Mattingly were among the very best at their position in their respective leagues in the 1980 and both will have the benefit of a writer who covered their peaks on the committee this year. In addition to O’Connell, longtime San Diego writer Bill Center will be in the room today. Like Munson, Mattingly could also benefit from a group of peers that spent most or all of their careers in the American League. Parker, like Mattingly a former MVP, may have his case enhanced by the presence of ex-teammates in Yount and Eckersley as well as Alderson and Jocketty, who were Athletics executives when Parker played there in 1988 and 1989.

—Nobody is more connected to the committee than Tommy John, who was teammates in California with Carew and in Oakland with Eckersley, covered in New York by O’Connell and employed in Oakland by Alderson and Jocketty. Plus, the surgery named after him might be the most revolutionary bit of sports medicine in history.

—Dwight Evans was better — a lot better — than Jim Rice, who is in the Hall of Fame. He’s also a friend and former teammate of Eckersley, played against most of the other players on the committee and is still connected with the Red Sox, for whom Dave Dombrowski, one of the committee’s new executives, served as general manager for three-plus seasons before being fired in September.

—Lou Whitaker has no obvious representation beyond the peers against whom he played and Dombrowski, who was the Tigers’ general manager for almost 14 seasons before taking over the Red Sox. This seems appropriate for someone whose career might be the most overlooked of the modern era. Even accounting for the fact WAR wasn’t a popular tool until this century, how did a second baseman with 75.1 WAR go one-and-done on the ballot in 2001?

—Marvin Miller, who fought to gain free agency for players, is by far the most deserving and game-changing candidate on the ballot. Stranger things have happened than a group featuring six executives electing the guy who turned baseball players into the most powerful union on the planet. We just can’t think of any right now in 2019, two years before the next players-owners clash.

New Apple Security Update Could Scrap Your Old MacBook: Here’s What You Do

Google Changes The Way VMs Are Converted To Containers

As The U.S. Prepares For COVID-19 Disinformation Stokes...

How NBA Stars Are Helping The Fight Against...

The British Library’s ‘Harry Potter: A History Of...

3 Ways To Invest In Stocks Today