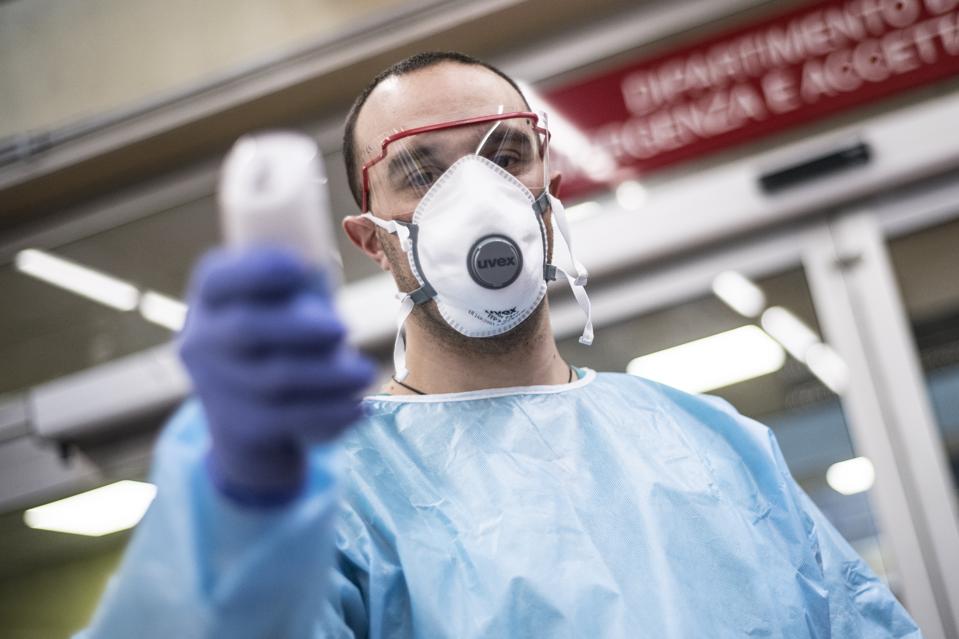 Health personnel wait to test people’s temperature in the triage area at the Molinette hospital as … [+] they try to prevent further coronavirus cases on February 26, 2020 in Turin, Italy

Topline: Italy, which is the largest cluster of coronavirus cases outside Asia, has seen the number of people tested positive for the pneumonia-like illness hit 400.

What’s behind the surge? WHO official Walter Ricciardi said that the numbers in Italy could be exaggerated, as the results of some test samples in the two-step verification process are yet to be confirmed. Only 190 have been confirmed positive through this process, Reuters, citing the Italian newspaper Corriere della Sera, reported. Hundreds of people in Veneto have been tested even without showing symptoms, Ricciardi told local press.

Big number: At least 80,000 people across 40 countries have been infected with the disease, while more than 2,700 have died, mostly in China. The World Health Organization said on Wednesday that the number of new cases reported outside China is now greater than the numbers being reported from inside China. But China’s system of categorizing cases of the illness, as well as the way it tests for it, have changed a several times since the outbreak first began while some have questioned the figures released but local and national officials.

Tangent: A child born this week to an Italian woman who has the coronavirus in Piacenza, a city bordering the affected Lombardy region, did not test positive for the illness, Italian newspaper La Repubblica reported.

Key background: Spain, Germany and France have also reported more cases of the virus in recent days, while a number of high profile events have been cut short or cancelled, including Six Nations rugby matches in Ireland next weekend. Outside Europe, South Korea, which is the second largest cluster of coronavirus cases, has reported 1,200 cases and 12 deaths. Most infections there have been linked to the secretive Shincheonji church sect.

Additional info: There are fears that the impact of the illness could tip Italy into a recession with tourism accounting for 13% of Italy’s GDP. Milan’s biggest tourist attractions, including the Duomo, have been closed while around 50% of hotel bookings have been cancelled over the past week.

4 Ways To Plan For The Future Of Your Brand

The Size Of America’s Immigrant Electorate Doubled Since 2000 [Infographic]