Breaking
Expanding Your Business Into Spain: What You Need...
Essentials For Your Office Coming Out Of COVID-19
What Can Marketers Learn From Digital Cults?
Why NASA’s James Webb Space Telescope Will Never...
Increasing HR Effectivity and Efficiency through Software Solutions
The Difference Between Building A Startup In Bull...
Fluor Corp Ranked Among Today’s Top Shorts
Common Pitfalls to Look Out for When Buying...
Will the Olympics go ahead this year?
Pack Up the Big Top: Insights from MozCon...
Best WordPress Themes for Blogs
Get Ready To Rip And Tear, As The...
As Economy Recovers, Loan Approval Rates Increase For...
Lessons Learned—Avoiding The Fundraising Errors That Can Sink...
Top Tips to Help You Effectively Manage Your...
Malaysia’s Carsome, Tycoon Patrick Grove’s Catcha Group To...
Home Finance ‘It’s Good News!’ Senate Confirms Agreement On Stimulus Package
Finance 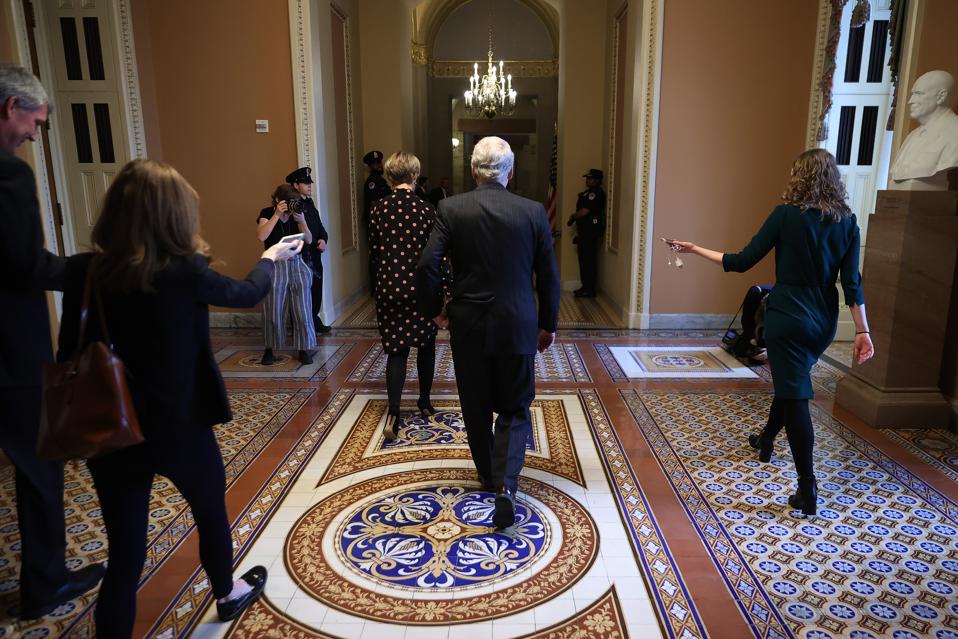 WASHINGTON, DC – MARCH 24: Senate Majority leader Mitch McConnell (R-KY) returns to his office as … [+] negotiations continue on a $2 trillion economic stimulus in response to the coronavirus pandemic March 24, 2020 in Washington, DC. After days of tense negotiations — and Democrats twice blocking the nearly $2 trillion package — the Senate and Treasury Department appear to have reached important compromises on legislation to shore up the economy during the COVID-19 pandemic. (Photo by Chip Somodevilla/Getty Images)

McConnell continued, “At last, we have a deal. After days of intense discussions, the Senate has reached a bipartisan agreement on a historic relief package for this pandemic.”

The text of the deal has not yet been released, but details from those in Congress suggest that it will closely resemble the bill released by the Senate last week.

The bill is expected to keep in place the Senate version of the stimulus plan, which would allow for checks of up to $1,200 per adult – or $2,400 for married couples filing jointly – as well as $500 per child. The amount of the checks would start to phaseout for those earning more than $75,000 ($150,000 for joint returns) and would disappear entirely for those earning more than $99,000. Those families at the bottom – those with no federal income tax liability – would receive less money, but no less than $600.

The bill is expected to cost nearly $2 trillion. It will include almost $500 billion for companies who are experiencing economic distress. That’s been a sticking point for the House, with Democratic representatives initially concerned over the lack of oversight concerning bailout funds. Yesterday, Secretary of the Treasury Mnuchin signaled that a deal would include tighter controls, and today, Senate Minority Leader Chuck Schumer (D-NY) confirmed that restrictions would be in place. Among them, there is a provision that would prohibit members of Congress, as well as President Donald Trump and his family, from getting loans or other benefits from the bailout.

Included in that amount is a significant amount of funding for hospitals and healthcare workers struggling to deal with the COVID-19 pandemic.

COVID-19 is the official name for the infectious disease caused by the most recently discovered coronavirus. According to John Hopkins, as of March 25, 2020, there are 435,006 confirmed cases of COVID-19 in 171 territories and countries. The United States has 55,238 confirmed cases with reported cases in every state.

As of this morning, there is no updated text made public. I will share it as soon as I receive it. In the meantime, you can find links to the earlier proposals in my summary of the Senate bill here, and you can skim my recap of House bill here. If you want to see what the plans have in common – and what might make it into the final proposal – you can find it here.

The Senate will reconvene on Wednesday at noon and is expected to vote shortly after that.

U.K: 250,000 Volunteers Step Up In National Fight Against Coronavirus