Breaking
Why Do We Do What We Do? Manipulating...
California Brand Goes All-American As Amazon Bans Foreign...
Trump’s Taxes Are Finally Leaked—What’s Next?
Washington Heats Up Ahead Of First Presidential Debate:...
Systemic Racism Leads To Disparities In Nursing Home...
The New Regular: Prepare For Conflicts Of Customer...
Web VR.0 – Have VR Websites (Finally) Arrived?...
This Next Evolution Of Ecommerce Did $18 Billion...
IRS Taxes Most Lawsuit Settlements And Exact Wording...
13 Questions To Answer Before You Die
Just Launched: Long-Term Stock Exchange For Companies Building...
How To Make Your Savings Work Harder For...
Xbox Series X Hands On Previews Reveal 70-80%...
How Business Leaders Can Rethink, Redesign And Reimagine...
How To Make Peace With Your Internet Passwords
37 ‘CS:GO’ Coaches Banned For Cheating With More...
Home Business It’s Surprising More Writers Didn’t Vote For Derek Jeter For Hall of Fame
Business 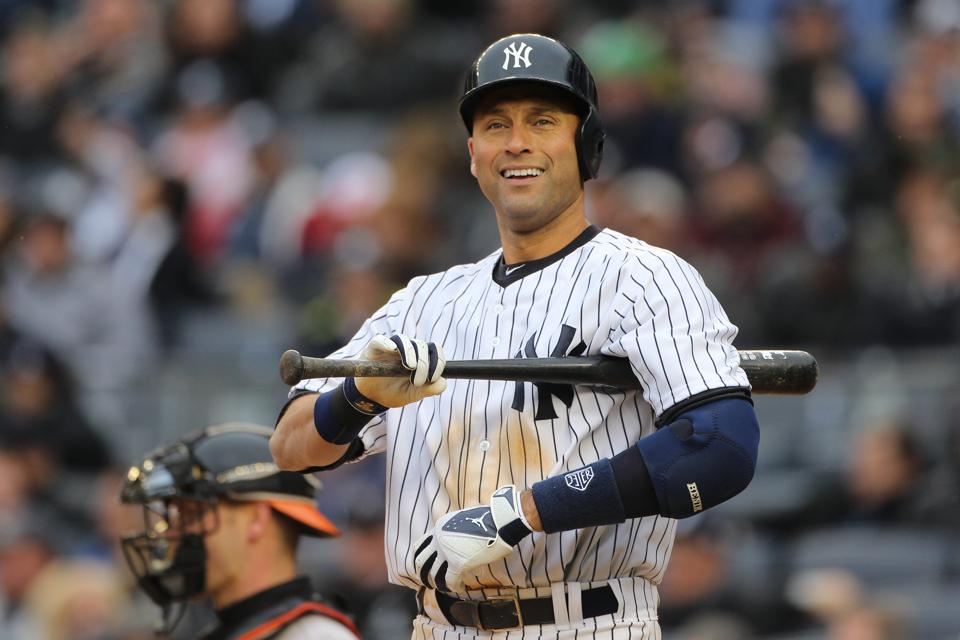 Derek Jeter is going into the Baseball Hall of Fame. He missed going in unanimously by one vote. … [+] Actually, it’s surprising that only one did so. (Photo by Tim Clayton/Corbis via Getty Images)

Each and every year fans gather ahead of the upcoming Major League Baseball season and await the voting results for the Baseball Hall of Fame. Fans and media hover over ballot projections as if it were a presidential election, dissecting player stats, discussing their character, and largely raking the baseball writers over the coals for their selections, should they be made public.

Like a well-oiled machine, each year the fans will bemoan those that don’t reach the requisite 75% threshold needed for inclusion. Rarely do fans reach an uproar over those that make the grade and reach the levels to be enshrined into baseball’s most-hollowed fraternity.

But it did happen this year. The howls reached ear-piercing levels. On social media. On talk radio. On television. Derek Jeter – The Captain – and shortstop of those great 1990s dynasty New York Yankees that won four World Series in five years, missed being unanimously selected by one slender vote. Jeter goes into Cooperstown with 396 of the 397 ballots cast, or 99.7% of the total. For now, no one knows who the writer is that didn’t vote for him. Ballots are only made public by name when the eligible writers choose to do so. Some make ballots public but do so anonymously. Some do not wish their votes revealed in any way. Regardless, the writer now has a bullseye on his back.

As a five-year member of the Baseball Writers Association of America (BBWAA), I am half way to eligibility to vote for the Hall of Fame. But for years I have studied the voting body, examined each player on the ballot closely, and filled out my phantom ballot as if it were going to be submitted. Yes, Derek Jeter was on that list. But believe it or not, I am surprised only one writer failed to vote for him.

Jeter is one of the most memorable and best shortstops in the last 50 years and is in the top ranks all-time. With so much visibility in the postseason, he has become a highlight reel for the game. “The flip”. “The dive”. Fans know these plays by heart because they are etched in their minds. Throw in that The Captain is seen as the model by which all players should mold themselves by in terms of character. In the throes of the steroid era, he never was talked of or implicated of “juicing.” He never got into trouble. He played the game, as they say, with respect. So, how, you ask, am I only not surprised he didn’t go in unanimously with one writer not voting for him, but really amazed that others didn’t do the same?

Remember, I would vote for him, but here’s the voices out there that might make others take a pass on the first ballot, or ever…

His defense was not anything to write home about. He was certainly not bad, but he was not in the discussion of being great. His range, especially to his left, was a well-documented weakness. By Defensive WAR (dWAR) he was a -8.3. Out of 500 shortstops ranked by the defensive stat, Jeter comes in at 497 ahead of only Michael Young, Hanley Ramirez, and Harvey Kuenn.

It goes further. One could make the case that from the time Alex Rodriguez arrived with the Yankees in 2004, Jeter wasn’t even the best shortstop on his own team. Rodriquez, who ranks behind only Honus Wagner by the shortstop JAWS list, moved to third-base out of deference to Jeter who was the clear leader of the team.

But let’s put all that aside. Let’s all agree that Jeter is one of the best shortstops the game has ever seen. We can’t get into the mind of the writer that left him off, but maybe the question he pondered was this: if Mariano Rivera went in unanimously, how does Jeter stack up to him? As closers go, no one was more dominate than Rivera. He is the all-time saves leader with 652, 51 saves ahead of Trevor Hoffman in second and a staggering 174 saves ahead of Lee Smith who is in third. He struck out 1,173 batters over 19 seasons compared to 1,029 for Hoffman over 18. Rivera is, by all accounts, the best there ever was at the position. A pitcher so feared that even when batters knew he was going to throw that nastiest of sliders, there was little they could do with it.

Finally, who knows how playing the ballot with the ability of voters to make 10 selections works in the mind of every writer? Maybe the writer wanted to use all 10, knew The Captain was a slam dunk, and chose to give that vote to someone else that would not have received it if it went Jeter?

So, in some respects, you might see why a voter might not have voted for him. I wouldn’t have; it’s not a great case. But there are scenarios where voters could have looked at several factors and said, “He isn’t going to get my vote this year.” After all, if a writer could vote for just Jeter (and they did, not once, but twice), and ignore the rest of the ballot, is that any worse than not selecting Jeter? In the end, it’s not like The Captain wasn’t going to get in. Up until Rivera no one had been unanimously selected. Not Ted Williams. Not Babe Ruth. Not Cal Ripken, Jr., not Ken Griffey, Jr.

In the future, this will play itself out again. There are two players that have a shot at being selected unanimously. One is Ichiro. The other is Mike Trout. Like Jeter don’t be surprised if they don’t land 100% of the votes on their first ballot for the Baseball Hall of Fame.