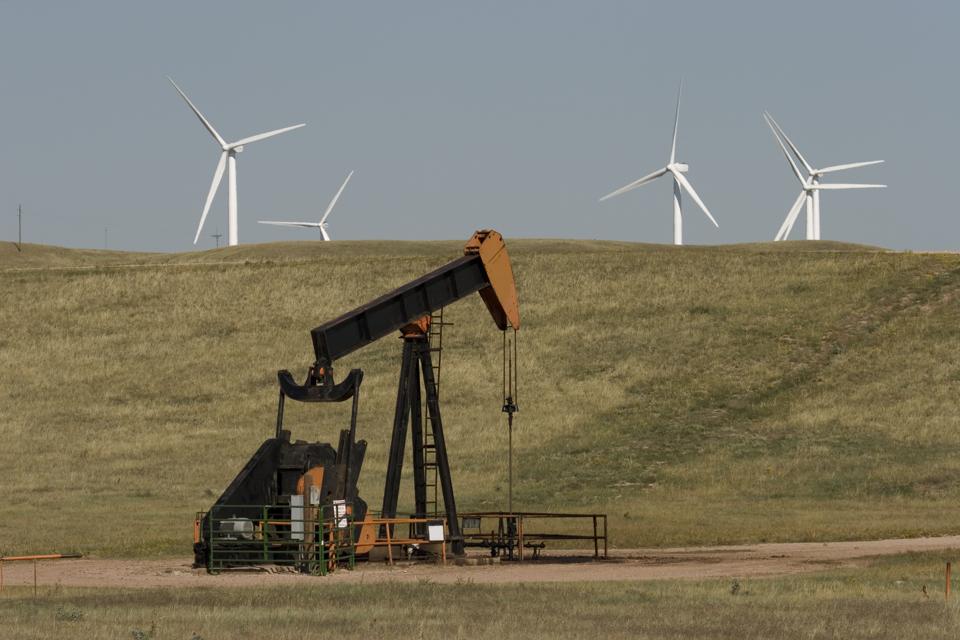 Wind turbines on the march near an aging pumpjack on the Colorado and Wyoming border.

Fossil-fuel companies are doing all they can to thwart the development of renewable energy, a renewables developer said this week, but renewables now have the clout to fight back.

“The battle of fossil vs. clean energy is on,” said Craig Gordon, the vice president for government and regulatory affairs at Chicago-based Invenergy, “and we just need to get our act together and influence policy outcomes in a way that we’ve never done before as an industry.”

It’s a pitched battle because both industries are forcing new megawatts into a market that’s shrinking. On Wednesday, the U.S. Energy Information Administration projected that energy production will continue to grow faster than energy consumption for the next 30 years, largely because of improvements in efficiency.

Renewables will supply most of the projected growth, EIA said, because of falling capital costs for solar and wind technologies. Coal appears to be the first casualty in this war, a positive development for the climate. Oil and natural gas are being squeezed into export markets, the EIA points out.

“The entrenched oil and gas interests in the country are doing everything they can—from communication campaigns to getting involved in regional fights or even local fights around siting—everything they can to thwart the development of renewable energy,” Gordon said during a webinar hosted by the American Council on Renewable Energy.

“It’s life or death for them and we don’t see that going away.”

A 2018 study in the journal Climatic Change found that during the Obama Administration lobbyists from the fossil-fuels industry outspent renewables and environmental groups combined by 10 times trying to influence legislation addressing climate change.

“To make matters slightly worse is the fact that natural-gas prices are pretty much at all-time lows, and the forward curve for natural gas in the next 10 years is also exceptionally low, and so to the extent that power prices are derived from natural gas prices—which historically they have been—it creates a highly competitive environment for developers like us to find projects and to build them and make returns that are necessary to justify the expense.”

In the long term, Gordon said, “something’s gotta give.” And that something could take the form of a carbon price, or regulatory reforms, or a national energy policy that helps the country transition to clean energy.

“We need to figure out some pretty macro solutions to the pricing environment that we’re experiencing.”

“In fact I think it’s a clarion call for the renewable industry to get its act together, come together, and start acting like the force that we are and the force that we’re going to be in the future,” Gordon said. “We’ve got scale, we’ve got the scope, and I think we just need to come together and use the power for the right objective instead of trying to hold onto the past. Because everyone, including the public, wants to move forward with renewables, and we just need to come together stronger and be the clear voice for for energy policy in the country.”

The Evidence That ‘Destiny 2’ Is Bringing Back...