Breaking
Can Money Protect You From Covid-19? It May...
The Most Important Voice In Artificial Intelligence: Frontline...
Amazon’s Small Business Empowerment Team Is Helping Entrepreneurs...
10 Ways For Entrepreneurs To Power Through Tough...
Will The Cloud Take Down The Mainframe?
How Itamar Medical Stock Could Triple
How To Cash In On Biden’s Stimulus With...
The Refactoring X-Factor Behind Software Modernization
3 Habits Of Millionaires
Will The Stock Market Sell Off As Biden...
Microsoft Reverses Xbox Live Gold Price Increase Following...
Weekend Favs January 23
FDA Approves First Monthly Injections To Treat HIV
Low Volatility Investing Works In China Too
How 2020 Introduced Big Technology Startup Opportunities
Apple Loop: Stunning iPhone 13 Decision, Shock New...
Home Business Jacksonville’s Journey In Engaging With Autonomous Vehicle Technology
Business 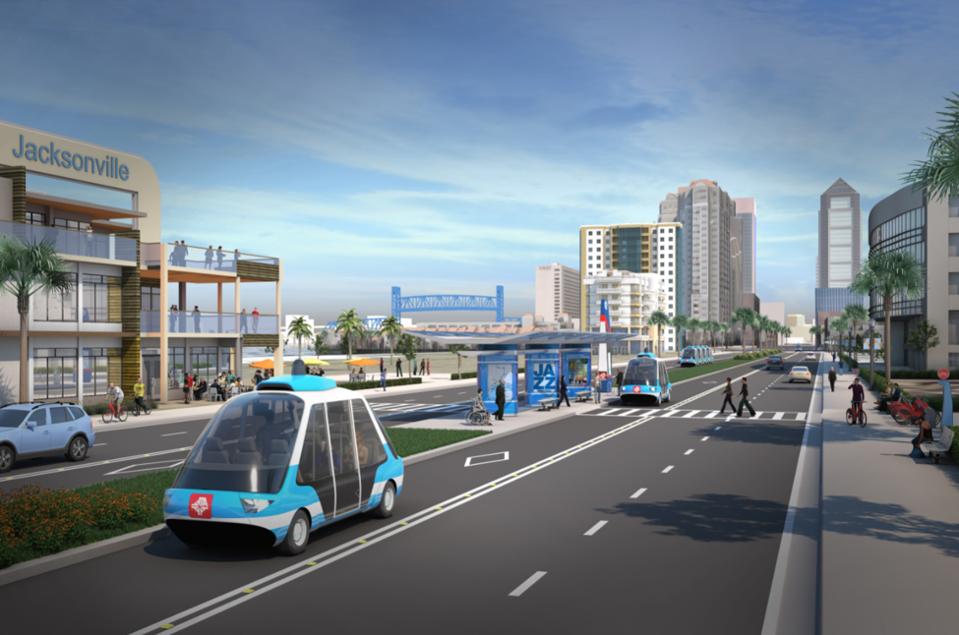 While there has been a great deal of Autonomous Vehicle (AV) activity in the public eye related to private vehicles, such as robo-taxi tests from companies like Waymo or Uber, the City of Jacksonville has been charting its own course through the Jacksonville Transportation Authority (JTA) with the deployment of AVs for public transportation. The JTA’s engagement with the technology provides insight into the challenges and reality of implementing AV technology for public use in a production environment.

The Opportunity: The JTA, a mid-size transit agency that began as an expressway authority, has operated an automated elevated people mover called the Skyway Express (Skyway) since 1989. At 2.5 miles, it serves the core downtown district.  With the city’s population projected to continue to increase, the public transportation challenge now included connecting newly developed neighborhood centers, such as the entertainment and hospital districts. With the aging infrastructure and obsolescence of the vehicles, the JTA determined that it was the perfect time to consider AV technology as an compelling upgrade to the system.

Autonomous Vehicle technology had all the characteristics to provide a viable and cost-effective solution to converting the Skyway network without substantial infrastructure changes. Through a task force assembled in 2015 with various JTA, City of Jacksonville, business and community stakeholders, the idea that AVs could reuse the old Skyway civil infrastructure and then transition onto existing surface streets to extend the network took hold, and with this vision, the Ultimate Urban Circulator (U2C) project was born.

“When I arrived in Jacksonville in 2012, the first question I often got was ‘Nat, what are you going to do with the Skyway,’ and so we began to look at the possibilities almost immediately,” said JTA Chief Executive Officer Nathaniel P. Ford Sr.

The promise is great, but AVs are an emerging technology with many open questions. Can AV shuttles handle mixed traffic? Will they require dedicated lanes and, if so, will there be additional infrastructure investments? What will be the ongoing maintenance requirements? Will the vehicles still need drivers? Finally, who will provide the answers to these questions?

“These are still questions we’re working to answer, now, as part of our aggressive testing protocol in Downtown Jacksonville,” said Ford.

“So we brought in Bernard Schmidt as our Vice President of Automation along with Michael Feldman as Director of the U2C Program,” Ford said. Both Schmidt and Feldman came to the JTA from Amazon where they specialized in robotics and automation.

Familiar with new technology introduction, the U2C team started by building a test facility (an isolated road in Downtown Jacksonville) upon which they could test vendor solutions. This was wise because they soon discovered there was a big difference between the demo-like capabilities presented by the AV vendors and the robust solution required by a public transportation utility. To resolve these issues, the U2C team works with vendors in an unusual research and development level collaboration. Understanding the criticality of the test and learn program and vendor relationships, a local governance structure was established and dubbed as the Bay Street Innovation Council (BSIC). The BSIC was initiated to bring key government stakeholders to the table to reach alignment on the U2C program and overall execution.

Given a relatively robust AV, the next task was to understand all the interesting use-models. Should there be a driver? What about access for the disabled? What about maintenance and energy? Since there were no precedents, each of these topics had to be investigated and solutions built. One major area of concern was to ensure that the JTA provided excellent customer service and a safe environment for riders to experience.

All of this work was done under the legal framework provided by the series of forward looking State of Florida AV bills spear-headed by Sen Jeff Brandes. The latest one, HB 311, was signed by Florida Gov. Ron DeSantis on June 2019. Overall, the JTA’s U2C project demonstrates the complexity of introducing AV technology and the unique capabilities that an early pioneer must possess in order to engage in this space.

The London Design Studio Making The Most Of Marble Waste