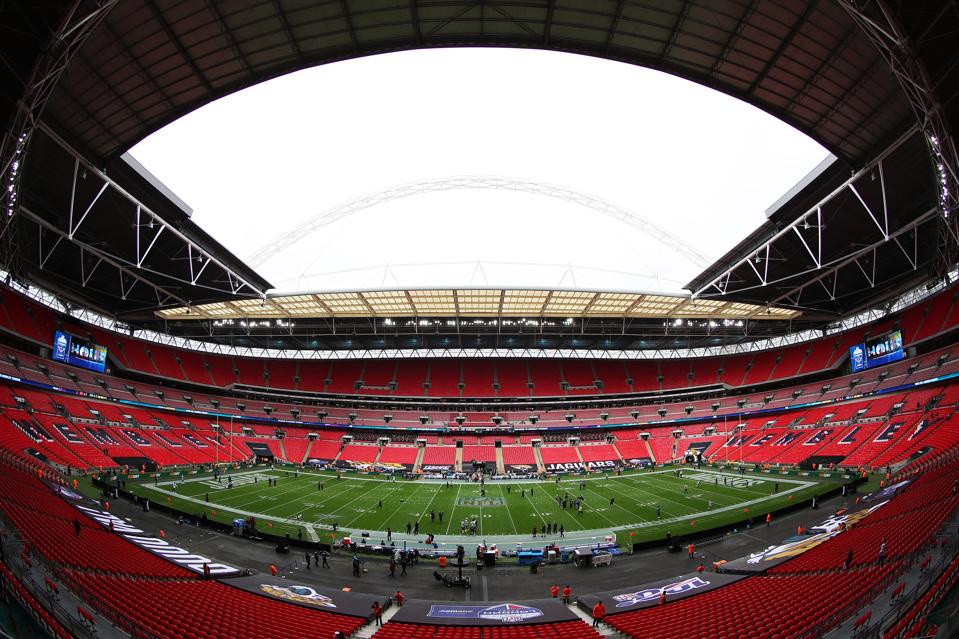 LONDON, ENGLAND – NOVEMBER 03: General view inside the stadium prior to the NFL match between the … [+] Houston Texans and Jacksonville Jaguars at Wembley Stadium on November 03, 2019 in London, England. (Photo by Jack Thomas/Getty Images)

The Jaguars are going to play two back-to-back homes games at Wembley Stadium in London, England during the 2020 season, the team announced on Monday. Jacksonville becomes the first team in National Football League history to play two home games outside of the United States in the same regular season. Despite taking two games out of the city of Jacksonville, FL, owner Shad Khan said winning is the organization’s top priority.

“Everything we’re striving to do for the franchise and the city is about winning and about building a franchise that expects to win constantly. I think most of you know, I just came back from the Super Bowl and obviously witnessed firsthand the energy of the fans and obviously the joy of Kansas City fans afterwards and I want that more than anything for the Jaguars fans,” Khan said. “We’re not going to rest until we get there, but that doesn’t erase what we need to do here away from the game and to create and generate the revenues and be everything we can be here in Jacksonville.”

Although playing in a small market has its financial challenges, Khan explained that the plans the team has for stadium improvements also benefits the city of Jacksonville. Most notably, Khan has proposed a $500 million project to develop an area next to TIAA Bank Field known as Lot J. It would feature an entertainment district, a 200-room hotel, residential buildings offering 405 units and additional parking. The project would significantly change the look of downtown Jacksonville.

“Everything we’ve done is always with the city in mind – Daily’s Place, the Dream Finders [Homes] Flex Field [at Daily’s Place], improvement in the stadiums, major concerts, etc. I think the list goes on,” Khan explained. “Lot J is about the city and why the two games in London, while we embark on the biggest downtown project in recent memory, absolutely makes sense for us. We move downtown forward, we improve our local revenues and we continue to grow our profile internationally, and not just for the Jaguars but also for the city of Jacksonville.” 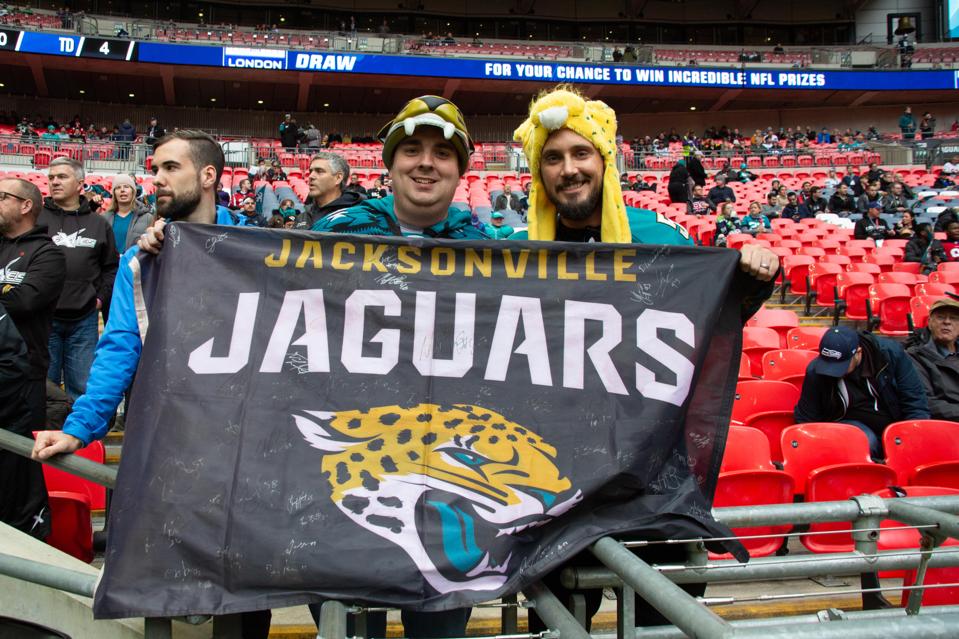 Naturally, there is concern surrounding the fans’ reaction to losing a second home game to London and it is warranted. However, Khan insists the move will help the organization long-term and he expects the fan reaction to be positive.

“Everything we’re doing helps the city, helps us, and that’s what you need a small market team to do to get on a competitive footing with all the resources you need to compete with the other big market teams,” Khan said.

As part of the schedule restructure of playing one less game at home, the team announced that for season ticket holders, for the first time, variable pricing is going to be introduced. For preseason games, the ticket prices will be reduced by 50 percent, according to team president Mark Lamping.

“We will also have our prime opponents priced slightly higher than our other season tickets. The net impact of this is that season ticket holders will be paying 15 percent less in 2020 than they paid in 2019. Why now? For teams like the Jaguars, we are entering a period of significant change within the league.” 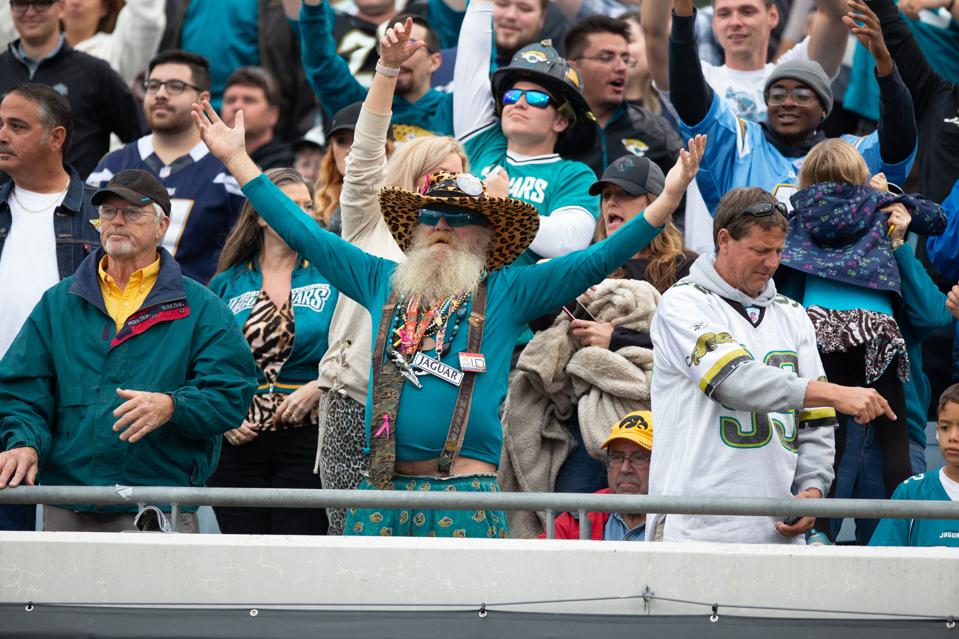 Lamping also pointed to Khan’s $100 million investment in the city-owned stadium as a way to improve the team’s fan experience which the franchise believes will in turn help the city attract major events. The team’s plan to improve Lot J and the Shipyards is something that Lamping said can’t happen overnight.

“These games in London will provide us with financial benefits during a much-needed time during the transition from where we are today until we open Lot J. But in addition to that, the city has received benefits through the economic impact of development through the partnership with London- and UK-based companies, as well as the increase in terms of UK-originated tourism,” Lamping added. “ Finally, we’re more confident than ever that we can be the catalyst to help the Jaguars and the city of Jacksonville realize our full potential.” 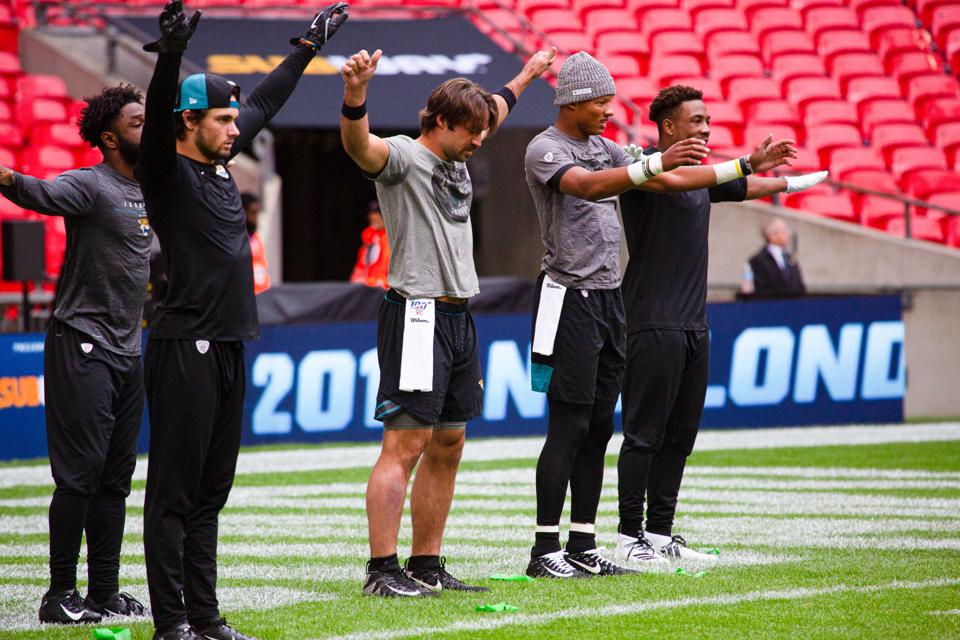 LONDON, ENG – NOVEMBER 03: Jacksonville Jaguars Quarterback Gardner Minshew II (15) and teammates … [+] warm up on the field before the NFL game between the Houston Texans and the Jacksonville Jaguars on November 03, 2019 at Wembley Stadium, London, England. (Photo by Martin Leitch/Icon Sportswire via Getty Images)

The team avoided answering the question of whether this is a one-year deal with London. Khan did say the league would ultimately make that decision.

In discussing the timing of the announcement, Lamping used Patriot Place as an example of how the National Football League does not stand still. Patriot Place is an open-air shopping center The Kraft Group built outside of Gillette Stadium to help create an additional source of revenue for the New England Patriots. 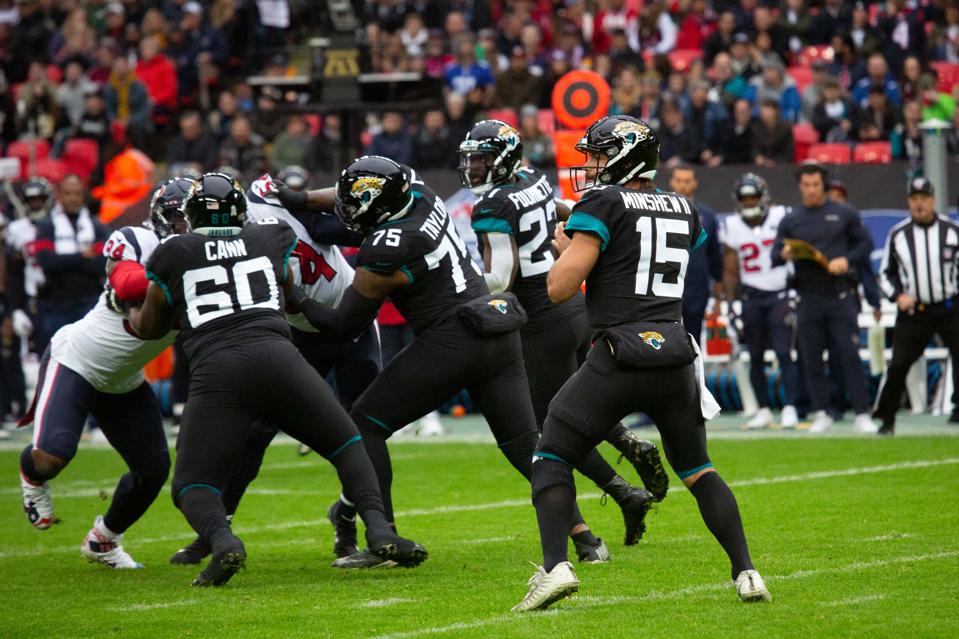 LONDON, ENG – NOVEMBER 03: Jacksonville Jaguars Quarterback Gardner Minshew II (15) gets ready to … [+] throw during the NFL game between the Houston Texans and the Jacksonville Jaguars on November 03, 2019 at Wembley Stadium, London, England. (Photo by Martin Leitch/Icon Sportswire via Getty Images)

The Jaguars will announce which games will be played in London in April when they release their full schedule. They did disclose that their games against the Pittsburgh Steelers and the Chicago Bears would both be played at home in Jacksonville.

In terms of how these changes could affect the players’ travel, Khan was not concerned. However, there could be concern on the players’ part in terms of the travel and also the tax implications these games will have on their paychecks.

Gold Mining Returns To Misima Thanks To The Bank Of England

A Different Kind Of Science Fiction: The Innovation...