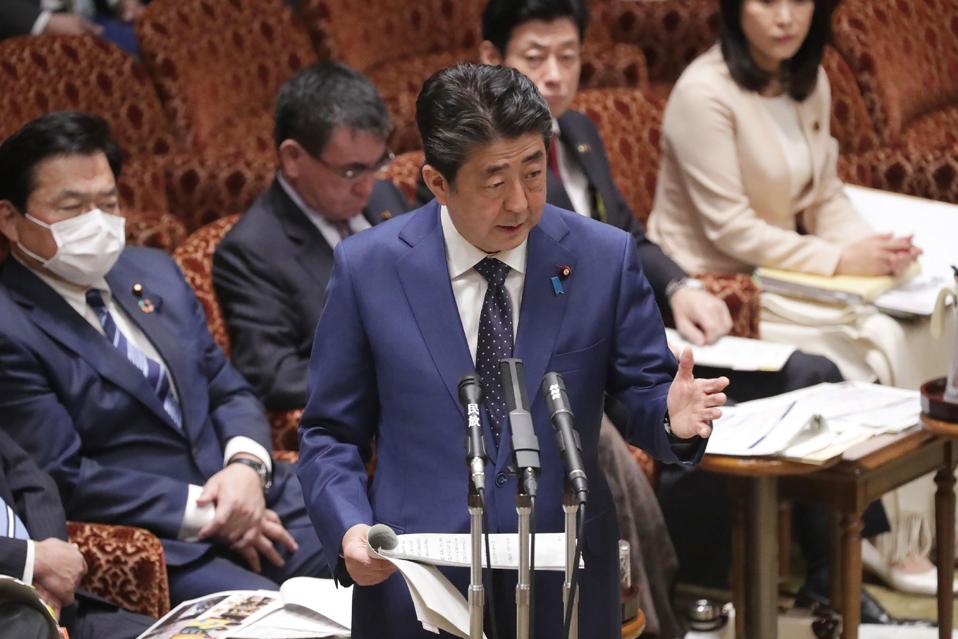 Tokyo delaying the 2020 Olympics may be the least of Prime Minister Shinzo Abe’s worries.

It’s hard to exaggerate the extent to which the Japanese leader thought this was his big year. Abe, of course, descends from political royalty. His father, Shintaro Abe, was a 1980s foreign minister who went mano-a-mano with Ronald Reagan in the Oval Office. His grandfather, Nobusuke Kishi, was the premier who scored the 1964 Olympics, Japan’s post-war return to the world.

For Abe, hosting the Summer Games was a legacy bookend. Just as 1964 signaled Japan’s technological renaissance, 2020 would showcase how it overcame deflation, bad-loan crises and being surpassed economically by China to lead anew.

The coronavirus outbreak changed Abe’s game with record-breaking speed. Tokyo 2020 will be held in 2021, well, hopefully, at least. And the fast-mounting fallout from that decision has his government cobbling together a $500 billion stimulus package, a sizable sum for the No. 3 economy.

This spending jolt isn’t all about losing the Olympics. But considering the pandemic has yet to impact Japan Inc. to the extent is it has economies from the U.S. to Europe to Asia, it’s easy to see how losing the biggest international event in decades is panicking Abe’s Liberal Democratic Party.

The real cost for Abe, though, could be his job. In late 2019, Abe checked off one big box for the family legacy when he became Japan’s longest-serving prime minister. Just three months into 2020, Abe may be wishing he’d hung up his political spurs right at the seven-year mark back in December.

In the days since March 24, when the 2020 Olympics were formally shelved, Abe and Tokyo Governor Yuriko Koike have suddenly become franker about the rising number of coronavirus cases. That suggests a lockdown that has political dimensions far beyond the economic risks.

As analyst Scott Seaman of Eurasia Group puts it, “the resulting disruption of consumer and business activity would deal a heavy blow to the economy.” Moreover, he says, “the subsequent discrediting of the narrative that Japan has somehow beat the odds and done a comparatively good job of containing the outbreak would risk rattling markets and increase the vulnerability of Abe and Koike to accusations that they failed to take effective action sooner.”

This latter question has Tokyo officialdom buzzing about whether Abe’s days are numbered. Again, 2020 was supposed to be Abe’s medal-round year. A successful Olympics, he assumed, would propel his approval ratings into the stratosphere and hasten gross domestic product. That, in turn, would give Abe increased political capital to revise Japan’s pacifist post-war constitution. 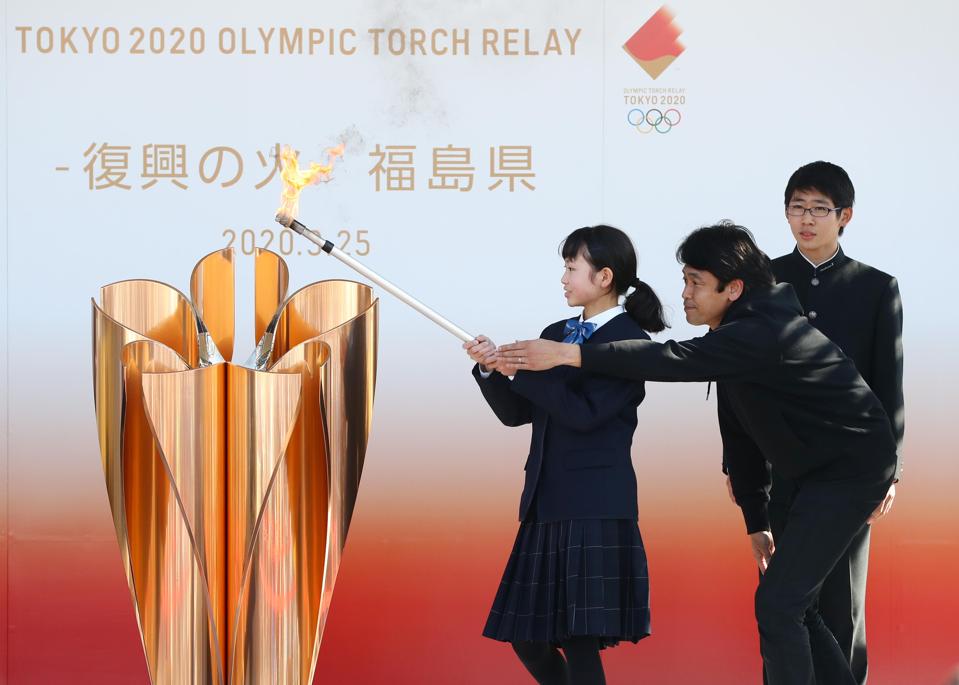 The Olympic flame is lit at the cauldron during the ‘Flame of Recovery’ special ceremony at … [+] Aquamarine Park a day after the postponement of the Tokyo 2020 Olympic and Paralympic Games on March 25, 2020.

Now, the betting is whether Abe can last the year. An explosion of COVID-19 cases would indeed be the “black swan” few Japan politics wags, if any, saw coming. And it might just be the latest reminder of how little headway Abe made in seven years to remake an aging and rigid economy.

Since December 2012, Abe and his hand-picked Bank of Japan Governor Haruhiko Kuroda flooded the economy with policy steroids. For Team Abe, Olympic construction proved its own fiscal lifeline. The estimated $30 billion Tokyo invested in the Games helped propel long-depressed condominium prices to the highest levels in 29 years.

The real boost, though, came from the BOJ’s monetary “bazooka.” Kuroda’s team drove the yen down 30%, a major boost to export giants. It cornered the bond market and loaded up on stocks via exchange-traded funds. By the middle of 2018, the BOJ was a top-10 shareholder in 40% of listed Japanese companies. Later that same year, the BOJ’s balance sheet topped the size of Japan’s entire $5 trillion economy.

What’s lagged, though, has been measures to increase productivity and innovation. One of Abe’s main selling points in 2012 was to relocate Japan’s entrepreneurial mojo. That meant catalyzing a startup boom, cutting bureaucracy, empowering women and importing more foreign talent.

Abe has succeeded in each of these areas. Areas in which he has put some wins on the scoreboard also come with caveats. Efforts to strengthen corporate governance were no match for major scandals from Kobe Steel to Nissan Motor to Toshiba Corp. And hopes of creating a more vibrant tourism business is now hitting a coronavirus uncertainty wall.

That has Tokyo watches wondering about challenges to Abe’s leadership. On Monday, Shigeru Ishiba, Liberal Democratic Party powerbroker, began hitting Abe for not acting more decisively to avoid a coronavirus outbreak in Japan. It will be the first of many attacks if the number of infections continues to increase (as the recent trajectory suggests).

Challenging Abe will get easier as economic growth disappears. Abe may have reformed little of note, but all those steroids did manage to produce the longest expansion since the 1980s.

That was until GDP plunged 7.1% in the fourth quarter. The threat to growth in 2020 is growing with the number of coronavirus cases. Little did Abe know that a year he thought would be his crowning glory could be his last in the prime minister’s offices.

I Spent A Day In The Feeding Frenzy Of N95 Mask Sellers And Buyers During The Coronavirus Pandemic: This Is What I Learned

Sick Of Earth? Here’s How To Apply To Be A Future NASA Astronaut

AEW Double Or Nothing Results: News, Notes As...

Fed Cuts Interest Rates By Half A Percentage...