Breaking
The Impact of Internships in Marketing
3 use cases of chatbots for critical services
How To Make Working From Home Appeal To...
Tips on How to Design an Office Space...
4 Tips To Help Build Amazing Customer Relationships
How Are US Pension Funds Responding to the...
Benefits of second-hand cars for your business
4 Reasons Why Your App Needs To Undergo...
Your Guide to Online Marketing
How to find a Solicitor in London
5 car tyre and safety tips for a...
Everything You Need to Know About Corporate Social...
Is Adaptive Leadership the Key to Motivating Employees?
Why business events are set to return with...
Business events set to return with a bang!
Expanding Internationally: 5 Things to Consider for eCommerce...
Home Business Jeremy Bloom Is Still Engaged In Advocacy For College And Olympic Athletes
Business

Jeremy Bloom of the USA in the finals of the Men’s Moguls competition in Sauze D’Oulx Jouvenceaux, … [+] Italy on Wednesday, February 15, 2006. (Photo by S. Levin/Getty Images)

In late January, I had the chance to visit with Jeremy Bloom. You may remember Jeremy as one of the top skiers in the 2002 Winter Olympics. He was a moguls world champion, and earning money from a ton of companies who wanted to engage his brand. After the ’02 Games, he needed to keep earning endorsements to pay for his continued training for the 2006 Olympics. As he actively sought sponsors, he sued, and subsequently was denied by the NCAA to play his last two years of football at the University of Colorado-Boulder. The reason? He received sponsorship and endorsement monies from his success as a skier.

Almost overnight, that changed. Over six days in mid-January 2020, both the NCAA and the USOPC announced changes to the power athletes should be allowed to exercise in governance and in marketing themselves. In addition, the USOPC is examining grouping athlete licensing in time for the 2020 Games in Tokyo.

We discussed the recent changes for athletes in both colleges and the United States Olympic and Paralympic Committee (USOPC) structures. He is still very involved today, advocating for athlete’s rights. 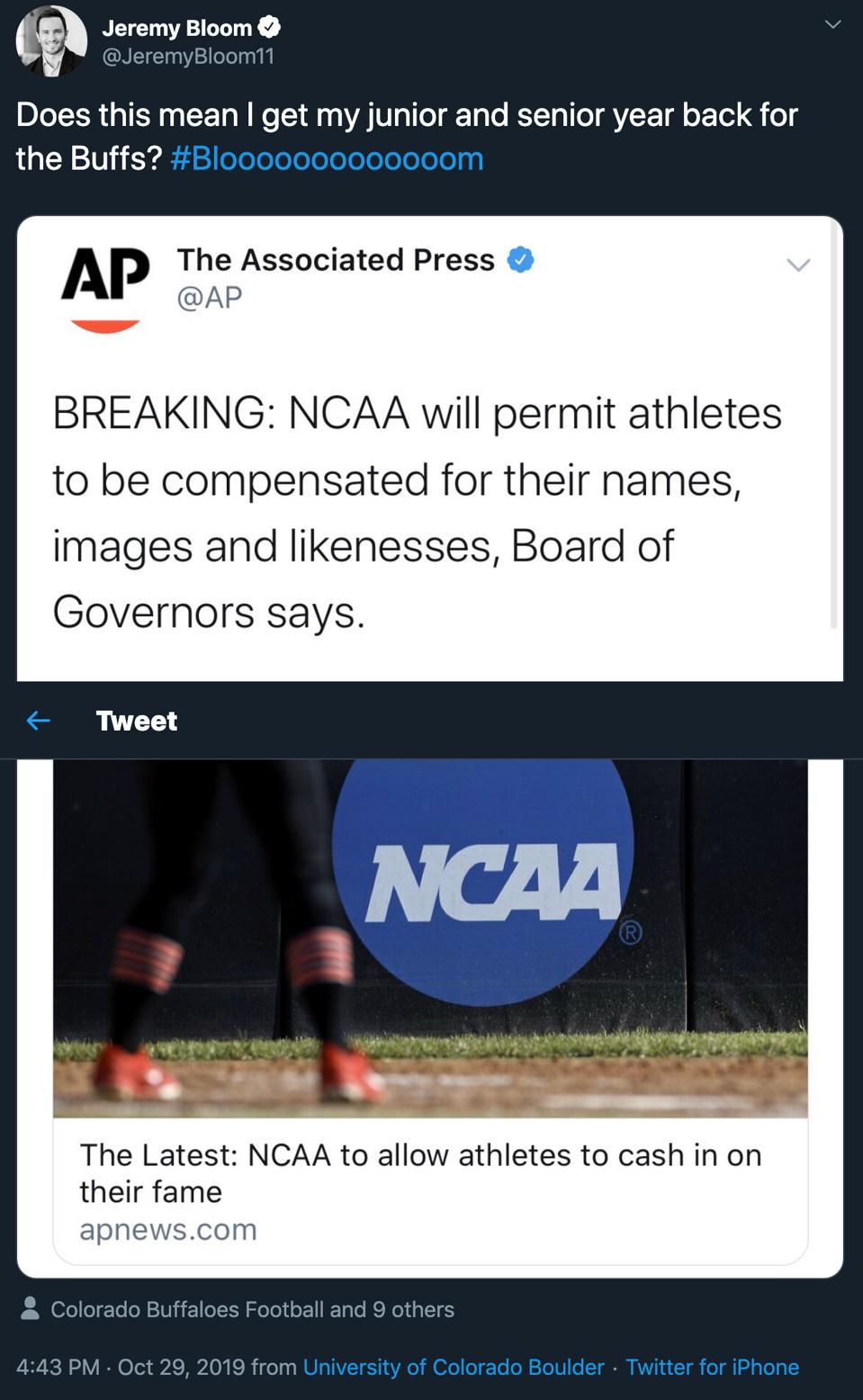 Jeremy Bloom on Twitter retweets an AP story about NCAA Names, Images and Likenesses, adding “Does … [+] this mean I get my junior and senior year back for the Buffs?

Here is a condensed version of our conversation:

KW:     Glad you could take a few minutes to talk with me. You recently tweeted about he NCAA’s decision to examine this issue of names, images and likenesses really hit home for you (see image above).

JB:       “Just being able to pay for my training would have been, that was the basis of my case. I mean, talk about the cherry on top if I could have done anything with my name, image and likeness, that would have been me getting everything I wanted, because that goes over and above and just paying for expenses you can actually make money, which I think is fair and right. Right? That was my skiing ability. It wasn’t the NCAA’s ability. I worked hard to have those opportunities. I was a world champion before I ever went to college.

I was an Olympian before I ever went to college. (The) NCAA did nothing to give me or even a platform for me to have those opportunities. The University of Colorado did nothing to give me those offers. So yeah, that would’ve been what I think it’s fair, what I ideally would have liked. I was just trying to compromise as much as I could so that I could pay for it. I mean, I wanted to go to a second… I wanted to go to the Turin Olympics. I just wanted to continue skiing. My skiing coaches were good with it. My football coach was good with it. And the only one that wasn’t was the NCAA. College presidents are really the only people that can institute fundamental change at the NCAA.”

KW: You’ve also been heavily involved in trying to update the Ted Stevens Amateur Sports Act from 1978. The USOPC announced they were going to allow the athlete representatives to create a professional staff—hire an executive director, pay for travel and projects, etc. What did you think as a former Olympic athlete about that revelation?

JB: “(When I competed) Athlete reps weren’t known to have an any power. It was kind of like you sign up for this and you’re a non-vote voting member on the side. But I will say with Sarah Hirschland (CEO,USOPC), and I’ve met with her several times and understand her strategic vision and what she’s doing. I think she’s ushering in a lot of great fundamental change for USOPC. And I think it starts with better supporting the athletes in more of a holistic way, not just to win Olympic gold medal. But to help them take care of their mental health.

Of course, we created the Safe Sport Act and Organization, where I’m on a congressional committee working to rewrite the Ted Stevens’ Amateur Act to include all kinds of things like government funding for some of these organizations like the United States Center for Safe Sport, but also for an independent body for mental health, which we need because when athletes have problems with mental health, they can’t go to their coaches, can’t go to their trainers. These are the people that are deciding that if they’re going to make it to the Olympics.(You) can’t show weakness… And I think Sarah’s ushering in a lot of really great change, and I’m very optimistic about her leadership and the USOPC work they’re doing.”

While all of this seems promising, last summer, the USOPC announced they were denying athletes the right to protest inside the venues in which they compete. And, today, the organization is still reeling from the Larry Nassar/USA Gymnastics scandal, which is costing them millions of dollars.

Both sporting organizations are taking steps to redefine what it means to be an “amateur” athlete, as well as controlling the narrative around the ideals they are selling to the general public. But if you ask any athlete or athlete’s advocate, last month’s actions are not nearly enough, and substantive change still feels a long way off.