Breaking
Doug Flutie Maximum Football 2020 Review: The Good,...
How To Delegate Effectively
Stock Market: Two New Trends Shaping Next Buying...
European Commission Legislative Package For Cryptoassets Leaves No...
Apple iOS 14.0.1 Release: Should You Upgrade?
Social Media Marketing Consulting
What You Need To Know About Your Startup...
Governor Signs Landmark Student Loan Borrower Protection Bill...
Reddit Co-Founder Alexis Ohanian Plans $150 Million Investment...
This Week In XR: Enterprise Adoption And Financing...
The Disadvantages Of Aging In Place
How Advances In Customer Service Can Take Telehealth...
5 Reasons Why Your Startup Needs To Be...
Beyond-Professional: What Is The New Workplace Normal?
Manufacturing In The U.S. Is On The Cusp...
After 75% Rally, Johnson Controls Stock Looks Fully...
Home Finance Jeremy Siegel On Why Rising Stocks Won’t Peter Out
Finance

Jeremy Siegel On Why Rising Stocks Won’t Peter Out 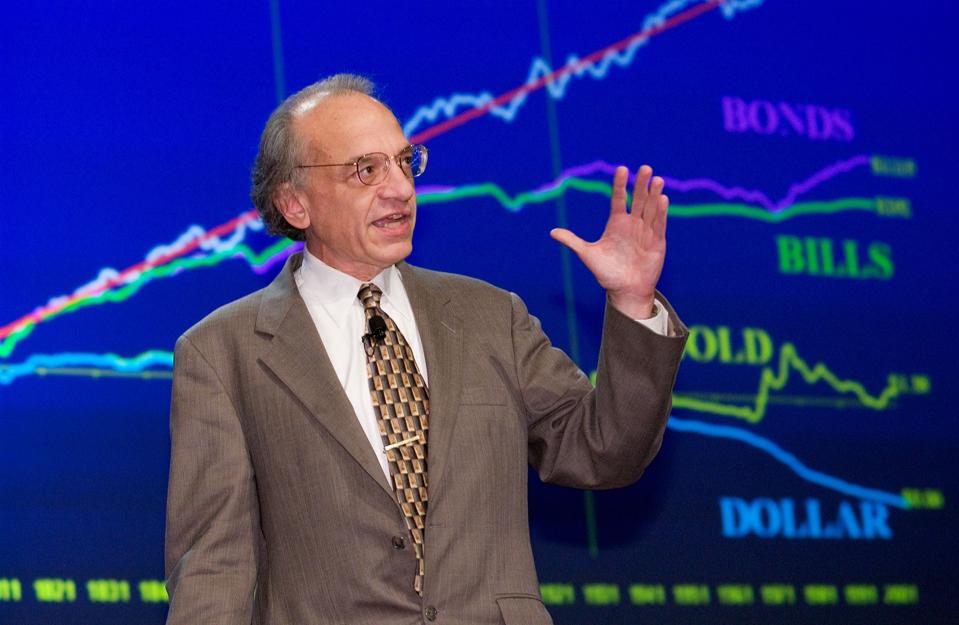 Well, we’re in a new bull market for stocks. Given the still-raging pandemic and the deep recession, this run can’t continue, right? Maybe it can.

Listen to Jeremy Siegel, who is a long-time champion of stocks and has the intellectual chops to back up his view of stocks. He says: You ain’t seen nothin’ yet.

His classic book, Stocks for the Long Run (issued in 1994, with a sixth edition coming out next year), is the Bible of equity-centric investing. Siegel, a professor at the University of Pennsylvania’s Wharton School, calculates that stocks since 1802 have blown away other asset classes, in particular, bonds.

That hasn’t been true in recent years, though. Over the past 20 years, since the dot-com peak in March 2000, the S&P 500 has logged an annualized return of 5.87%, compared to 8.32% for long-term corporate bonds, and 8.34% for long-term government bonds, according to Dimensional Funds.

That is owing to the precipitous decline of interest rates this century, which propelled bond prices (rates and prices move in opposite directions). And face the facts, stocks are more volatile than bonds.

During that two-decade span, the S&P 500 lost almost half its value twice (in the dot-com bust and the financial crisis) and a bit more than a third this past February and March. It took several years to struggle back from the first two losses, while the return from the winter 2020 crash is almost complete, just 3.4% shy of the March peak.

Regardless, an undaunted Siegel believes that stocks will roar anew in coming years. For one thing, short-term rates are zero, which means Treasury and corporate paper don’t have that much more running room for yield declines. (Siegel, like Federal Reserve Chairman Jerome Powell and much of the U.S. financial establishment, doesn’t expect negative rates to visit our shores.)

Bonds have enjoyed a bull market since the early 1980s, when the Fed licked towering inflation, and the sky-high interest rates it imposed to do so gradually declined. That set off bounteous bond price appreciation. As the result of low rates today, Siegel contends a bear market for bonds is looming.

In a fascinating recent Bloomberg Radio podcast hosted by Barry Ritholtz, one of the most engaging minds on Wall Street, Siegel sketched out why he thinks stocks will eclipse bonds going forward. (Ritholtz, co-founder of Ritholtz Wealth Management, was the source for the Dimensional asset class performance stats.) Aside from bonds having almost played out their yield-lowering string, Siegel argued that stocks should romp far into the future because, post-virus, conditions will be ripe for them.

Siegel explained that “as the economy opens up, as therapeutics and/or vaccines get developed that reduce that fear, you will see the so-called cyclical economy sensitive stocks do better clearly.” One factor is that Americans are sitting on a pile of savings that will be searching for an outlet beyond delayed consumer spending.

He noted that M2, the measure of the money supple available to the public (cash and checking accounts, plus things like money market funds), jumped 20% in eight weeks earlier in the the pandemic. “All this is suppressed purchasing power,” he said.

For his book, Siegel crunched financial numbers all the way back to 1802, and came away convinced that stocks have advanced since then around 6.5% to 7% on average annually, after inflation. Of course, the professor admits that there have been periods when stocks were not on top.

He rejects the label some have stuck on him as a “perma-bull” about stocks, by pointing to his Wall Street Journal op-ed in March 2000 decrying the dot-com boom. “The tech sector was selling for 90 times earnings” then, he said, versus a 32 multiple today for the S&P 500.

Going forward, Siegel still expects stocks to outdistance everything else, albeit at a somewhat lower rate, 5% to 6%. And owing to all the government stimulus of late, he looks for a temporary bump up in inflation to a bit above 3%. If you’re a stock investor, though, that shouldn’t faze you, he said, adding “stocks are really good as a moderate inflation hedge.”

With bonds likely to pay tiny yields up ahead and people’s longer life expectancies, Siegel advises investors to switch to a 75-25 stock-bond ratio, from the traditional 60-40.

Ritholtz, in a commentary on his blog about the interview, lauded the academic for his intellectual flexibility. Siegel, he wrote, “is one of those rare birds whose thinking continues to evolve along with the markets.”

Remote Education Is A Covid-19 Retiree Opportunity For You