Breaking
How to Utilize Questions in PPC Ads to...
How To Innovate The Influencers Space Using The...
6 Keys To Leadership Growth
Mayo Clinic And Kaiser Permanente Invest $100 Million...
MozCon Virtual 2021 Interview Series: Wil Reynolds
Commodity Spikes May Be Close To Peaking, Futures...
Benefits of Responsive Web Design
ESBC Major Updates: Tons Of Heavyweight Greats Added...
5 On-Demand Courses To Help Develop Your Leadership...
How to Run Nonprofit Marketing Ads
Entrepreneurs Are Bringing Transparency To Home Buying And...
Best Incentive To Get Vaccinated: Money, Messaging, Or...
Page Level Query Analysis at Scale with Google...
How A CIO Can Align IT With Business...
Blogger of the Month: Jo, Girl Eats World
6 Things Women In Business Know That Men...
Home Business Joe Ingles Has To Stay In The Utah Jazz’s Starting Lineup
Business 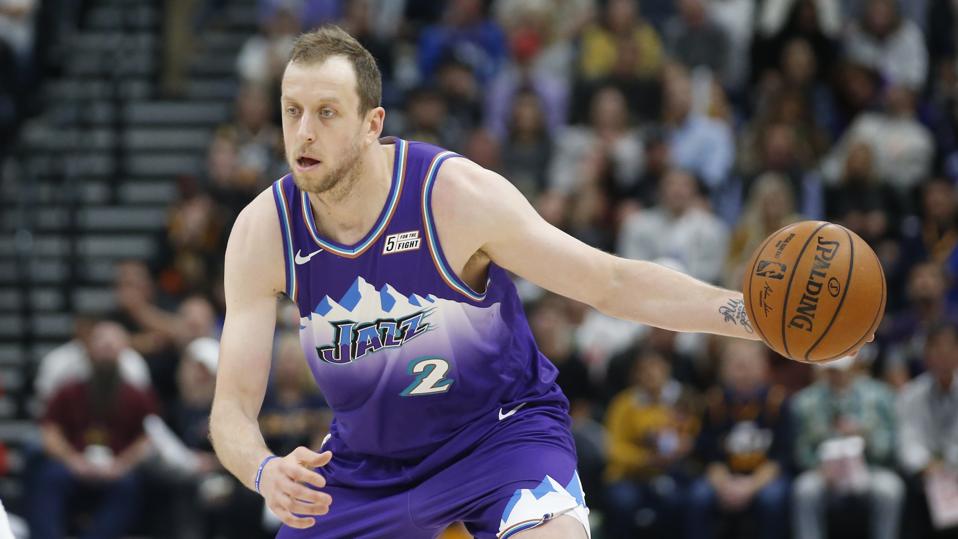 Gordon Hayward averaged 21.9 points with a 59.5 true shooting percentage in his final season with the Utah Jazz. He made his only All-Star game that campaign. And then, in the summer of 2017, he left.

It felt like the Jazz would have a gaping hole at small forward for the foreseeable future. How would the team make up for that much scoring, especially scoring that efficient?

The Jazz net rating was 3.7 points better when Ingles was on the floor during those two seasons. He was tied for 26th in the NBA in total wins over replacement player in that span.

Then, in the wake of Utah acquiring Mike Conley and Bojan Bogdanovic in the summer of 2019, coach Snyder made the curious (but explainable) decision to bring Ingles off the bench.

The idea was to have a lower-usage player like Royce O’Neale on the floor with Bogdanovic, Mitchell and Conley, so those three could soak up as much usage as possible. Then, Ingles could be something of a stabilizing force for the second unit.

Ingles started last season, but he actually had this role for much of last season. He’d play the first bit of games, come out early, then return for minutes alongside reserves. He did well in those minutes in 2018-19.

There was one 6’10” difference, though. That team had Derrick Favors, a legitimate pick-and-roll weapon. This squad has Ed Davis, he’s always generate much of his offense from rebounding and is nowhere near the pick-and-roll player Favors was.

This second unit also includes Emmanuel Mudiay (who’s never posted an above-replacement-level box plus/minus); Georges Niang (who can shoot threes but doesn’t do much else); and Jeff Green (who’s been below replacement level in three of his last seven seasons).

To expect Ingles, a player whose career usage percentage is just over 15, to carry that group was, to put it mildly, bold. And the results may have been predictable.

Then, an injury forced Snyder’s hand. With Conley out, Ingles returned to the starting five, where he had previously established himself as one of the game’s best 3s. Fortunately, he kept him there for the one game in which Conley returned (before leaving the lineup with injury again).

Finally, the Conley/Mitchell/Ingles/Bogdanovic/Rudy Gobert lineup so many expected was in action. And hopefully, that’s a sign that Snyder will stick with it once Conley is back.

As a starter, Ingles’ playmaking is far more valuable, since his passing targets are vastly more effective scorers like Mitchell, Bogdanovic and Gobert. And as the third or fourth option in a lineup, he faces far less defensive pressure on his scoring possessions.

His starting doesn’t have to come at the expense of Royce O’Neale either. One tough thing about this situation was that Ingles’ replacement, O’Neale, was playing great. But he spent the overwhelming majority of his career as a reserve prior to this season. There wasn’t going to be any adjustment period for him to come off the bench. His ceiling also just isn’t quite as good as Ingles has been since Hayward’s departure. And there’s importance in merely getting your five best players on the floor together as much as possible.

Ingles being his old self affects the team’s prospects far more than a slight uptick in production from O’Neale.

Whenever Conley returns again, Snyder has to stick with the starting lineup many assumed we’d see the moment Bogdanovic was signed.

2019: The Year Phones And Drones Defined Our Future.