Breaking
How, When And Where You Can See A...
New $2.2 Trillion Stimulus Bill Proposed—$1,200 Stimulus Checks,...
Why Do We Do What We Do? Manipulating...
California Brand Goes All-American As Amazon Bans Foreign...
The 3 Best Analytics Companies of 2020
Senator Cory Booker: Supporting Small, Minority-Owned Businesses Will...
Trump’s Taxes Are Finally Leaked—What’s Next?
Washington Heats Up Ahead Of First Presidential Debate:...
Systemic Racism Leads To Disparities In Nursing Home...
The New Regular: Prepare For Conflicts Of Customer...
Web VR.0 – Have VR Websites (Finally) Arrived?...
This Next Evolution Of E-Commerce Did $18 Billion...
This Next Evolution Of Ecommerce Did $18 Billion...
IRS Taxes Most Lawsuit Settlements And Exact Wording...
13 Questions To Answer Before You Die
Just Launched: Long-Term Stock Exchange For Companies Building...
Home Business Joe Judge’s Departure Leaves Patriots Without Two Coaches In One
Business

Joe Judge’s Departure Leaves Patriots Without Two Coaches In One 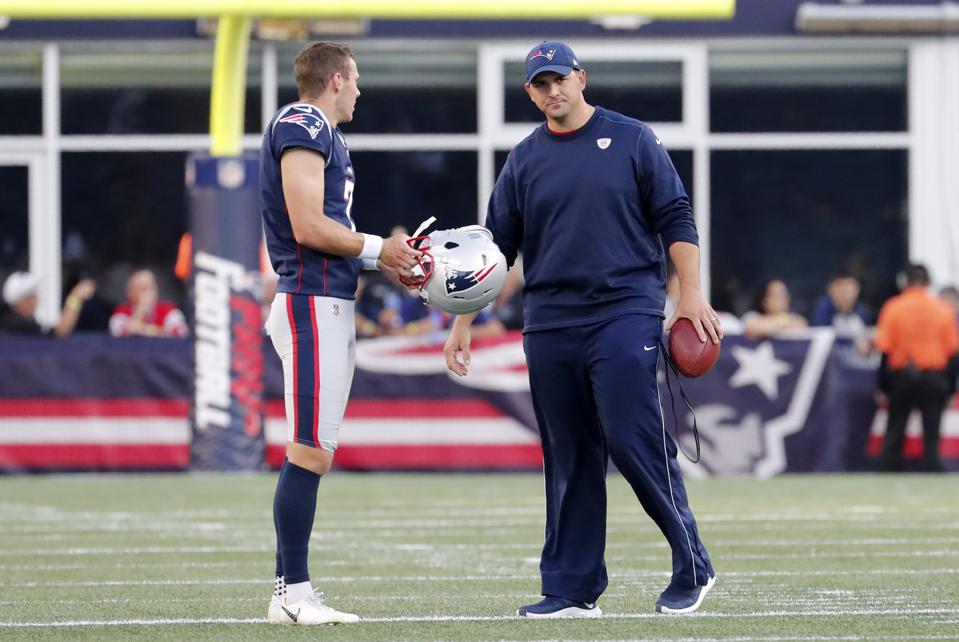 The New England Patriots lost two assistants to the New York Giants with one hire.

The latter role is one Judge took on after Chad O’Shea exited to become offensive coordinator of the Miami Dolphins last February. But the former role is one the 38-year-old held in Foxborough since Scott O’Brien transitioned to the scouting department in 2015.

The two-time BCS national champion and three-time Super Bowl champion interviewed with the Giants on Monday. Judge was the fifth candidate to do so. He was also the last, as ESPN’s Adam Schefter reported.

New York’s next head coach earned three letters while at Mississippi State, and continues toward his PhD in education having handled New England’s moving parts.

“I think a good coach is a good coach,” Judge told reporters last May. “I think No. 1, you have to be a good teacher. That’s what the players need more than anything is to learn information that allows them to do their job aggressively and effectively. So, to me, whatever position you’re coaching, you have to be a great teacher.”

Transactions on the back end of the 53-man roster often made special teams an advanced level of teaching for Judge, not to mention managing. Running backs and linebackers can play equal parts on punt returns. Receivers and cornerbacks can play equal parts on kickoff coverage. And, as Patriots head coach Bill Belichick has noted before, even a backup long snapper can become the most important position on the field when you need one.

“Joe’s done a great job,” Belichick said of Judge during his New Year’s Eve press conference. “He’s done a great job with the kicking game, and he’s expanded the role a little bit and that’s kind of had a little bit of a ripple effect in the way we’ve organized the kicking game. But that’s all worked out pretty efficiently. Joe’s done a good job of organizing that, as well as taking care on some other things with the offense and particularly receivers. So, he’s done a good job. He’s an excellent coach.”

Pro Football Focus graded the Patriots’ special teams as high as first and no lower than 10th around the NFL under Judge’s coordinating watch. The Patriots returned a pair of blocked punts for touchdowns this past campaign.

Cameron Achord served as assistant special teams coach over the past two Patriots campaigns, and spent the previous five years at Southwest Mississippi Community College under an array of titles ranging from running backs and tight ends coach to offensive, special teams and recruiting coordinator. Achord could be next in the line in the absence of Judge.

As for where New England will turn to oversee the wideouts, a wider net may be cast.

O’Shea had a hand in three Super Bowl victories during his 10 seasons as the Patriots’ receivers coach. The Dolphins parted ways with O’Shea after just one season as offensive coordinator, and after a 27-24 victory at Gillette Stadium. Patriots Hall of Fame inductee Troy Brown, who’d worked with the team’s receivers an unofficial capacity, is also among the names to monitor. The same goes for the in-house likes of assistant quarterbacks coach Mick Lombardi and coaching assistants Brian Belichick, Carmen Bricillo and Bob Fraser.

Promoting from within was necessary last spring. Reassignments also were. Former defensive play-caller Brian Flores brought a New England coaching contingent that included O’Shea, Jerry Schuplinski and Josh Boyer to Miami Gardens along with him. Elsewhere, Brendan Daly departed to work with the Kansas City Chiefs’ defensive line while current Rutgers head coach Greg Schiano shifted in and out of the plans.

More shifting is ahead for the staff.

And that is before Patriots offensive coordinator Josh McDaniels completes his interview for the Cleveland Browns’ vacancy.

Creators Of The Sports Bra Will Join Inventors Hall Of Fame