Breaking
U.S. House Passes Bill To Create First Crypto...
Top 3 Lessons For Financial Independence
The Ultimate Guide to Saving Money
Lights, Camera, Action—Is There A Post-Covid Future For...
7 Ways to Reduce Human Errors in Your...
How ‘Couples Therapy’ Used Technology To Cope With...
Can You Settle Your Student Loans Or Negotiate...
7 Best Practice PR Tips For Your Next...
How to Use Amazon Attribution For Ad Campaigns
What are the Makings of a High-Quality Link?
How To Quickly Start And Scale Your Business
Terra Virtua: What NFTs Can Teach Us About...
5 Easy Steps To Prepare Content For E-A-T...
Physical Inactivity Linked To More Severe Covid-19 Infection...
The 2021 Estimated Tax Dilemma: What Tax-Return Pros...
Want To Digitally Transform Your Business? Start With...
Home Business Joel Embiid’s Finger Injury Gives Al Horford A Chance To Prove He’s Worth $109 Million
Business 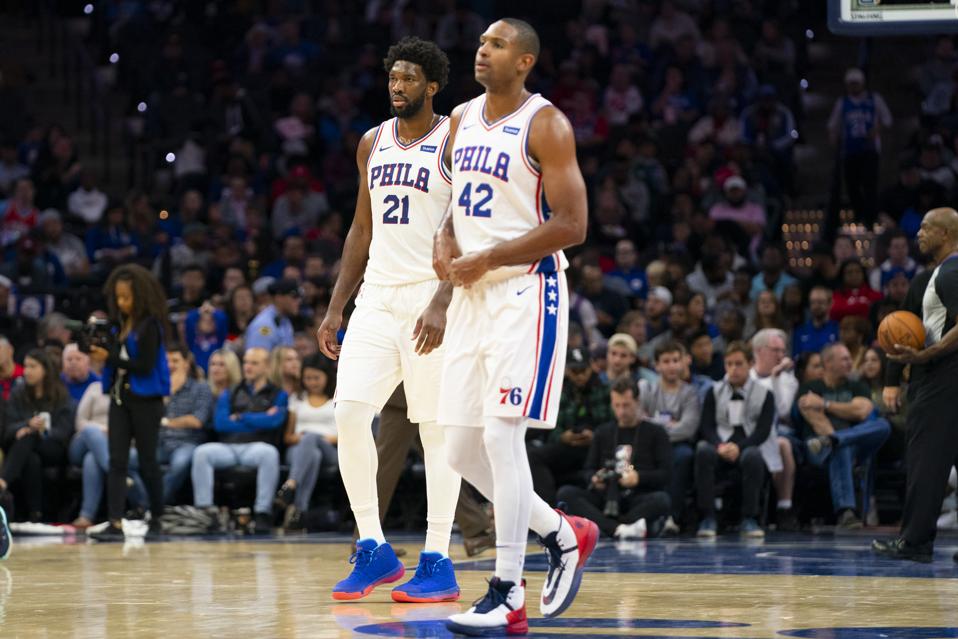 PHILADELPHIA, PA – OCTOBER 18: Joel Embiid #21 and Al Horford #42 of the Philadelphia 76ers walk to … [+] the bench during a timeout against the Washington Wizards during the preseason game at the Wells Fargo Center on October 18, 2019 in Philadelphia, Pennsylvania. NOTE TO USER: User expressly acknowledges and agrees that, by downloading and or using this photograph, User is consenting to the terms and conditions of the Getty Images License Agreement.(Photo by Mitchell Leff/Getty Images)

Embiid’s upcoming absence will give Al Horford a chance to prove why the Sixers signed him to a four-year, $109 million contract in July.

The Sixers didn’t sign Horford strictly as an Embiid insurance plan, but that was an undeniable benefit to his arrival in Philadelphia. When Embiid sat out last season, the Sixers got outscored by 152 points. When he played, they outscored opponents by 373 points, the best mark of any player on the team by far.

Horford’s arrival has helped to mitigate that. Heading into Thursday’s game against the Boston Celtics, the Sixers had outscored opponents by 133 points with Embiid on the floor, but they were a plus-13 without Embiid.

However, the early returns on Horford’s tenure in Philadelphia have otherwise been mixed.

Horford is averaging only 7.0 points, 6.6 rebounds and 3.8 assists per 36 minutes whenever he shares the floor with Embiid this season. He’s also shooting only 39.0 percent overall and 25.9 percent from deep alongside the All-Star big man, which is hardly what the Sixers expected when they signed him to such a massive contract.

Horford seemingly voiced some frustration with his role in the offense in a recent conversation with Keith Pompey of the Philadelphia Inquirer, too.

“I’m out [there] for the team and doing what I can to help us,” he said. “But offensively, I’m very limited with the things that I can do. So I can’t control that stuff.

“…It’s always an adjustment period when you are with a new team,” he added. “Things don’t necessarily click how you want them to. It’s just a different challenge.”

However, in the 672 minutes he’s played sans Embiid, Horford is averaging 19.1 points, 8.2 rebounds and 4.8 assists per 36 minutes. He’s also shooting 47.6 percent overall and 36.9 percent from three-point range during those minutes, which is far more in line with his career averages.

Horford shined during Embiid’s early-season absences, but he’s been far less effective since he missed two games with left knee soreness and left hamstring tightness in mid-December, as Derek Bodner of The Athletic noted Thursday:

It’s unclear whether a nagging injury is the culprit for his recent downtick in production, but he went through a similar slump last year with the Celtics before rounding back into form toward the end of the season. Either way, Embiid’s absence will force Horford to carve out a larger offensive role than he’s had to date.

Sixers head coach Brett Brown has repeatedly referred to Embiid as the “crown jewel” of the team, as he’s one of the league’s top rim protectors and a focal point on offense, too. Without him, the Sixers are forced to recalibrate much of what they do on both ends of the floor, as Brown noted prior to Thursday’s game (via Rich Hofmann of The Athletic):

Since the Sixers can’t rely upon Embiid as their go-to offensive option for the next few games (if not longer), they’ll need to get greater contributions from the rest of their roster. Thursday’s game against the Celtics provided a promising template on that front.

Horford finished with a tidy 17 points on 7-of-11 shooting, eight rebounds, six assists, two blocks, two triples and a steal in 32 minutes. Josh Richardson scored a team-high 29 points on 9-of-16 shooting—including 10-of-10 on free-throw attempts—while Ben Simmons and Tobias Harris combined for 35 points, 16 rebounds and six assists.

Throw in a few clutch three-pointers from reserves such as Furkan Korkmaz (nine points, 3-of-5 from deep) and James Ennis III (six points, 2-of-3 from deep), and the Sixers found the recipe to knock off one of their top rivals in the race for the Eastern Conference’s No. 2 seed.

Utilizing Horford as an all-around threat may help them replicate that moving forward.

Since the ball often goes through Embiid and Simmons offensively, the Sixers haven’t taken advantage of Horford’s passing ability nearly as much as they should. Heading into Thursday, he had only three games with six or more assists, whereas he had 14 such games—including a 10-assist effort—last season with the Celtics.

Horford is also likely to be featured in more pick-and-rolls in Embiid’s absence. He finished 4.0 possessions per game as a roll man last season with the Celtics, which constituted 31.6 percent of his offensive possessions. He’s down to only 1.9 such possessions per game this season, as the Sixers lack the type of traditional pick-and-roll ball-handler who can punish defenses for going under screens.

“As of 24 hours ago, with Joel, [Al’s] not featured as much. It’s just part of being on a good team, and he accepts it,” Brown told reporters Thursday. “Now, to play him and feature him more in things that we all know that he’s quite good at, capable at, just in a more frequent environment, I think positives can come out of this.”

Brown’s optimism may sound like a coach desperately trying to find silver linings in an otherwise suboptimal situation, but he’s correct to some extent. The Sixers need to figure out ways to win minutes without Embiid if they’re going to accomplish their stated goal of winning a championship this season. Although being without him for multiple weeks is hardly an ideal stress test, it will force the Sixers to reinvent on the fly and figure out how to better utilize Horford in Embiid-less minutes.

If Embiid’s absence gets Horford back on track, it could help solve part of the riddle the Sixers need to figure out before the playoffs begin.