With the long-term goal of capital preservation, above-average returns and low correlation to the market, the guru’s New York-based firm specializes in event-driven arbitrage strategies, including merger arbitrage, bankruptcy reorganizations and distressed credit.

Sticking to these criteria, the investor revealed he established two new positions during the quarter, exited six stocks and added to or reduced a number of other holdings. Notable transactions included the addition of Kirkland Lake Gold Ltd. (NYSE:KL) and Navistar International Corp NAV . (NYSE:NAV) to the portfolio, as well as significant reductions to the Allergan PLC AGN (AGN) and SPDR Gold Trust (GLD) exchange-traded fund holdings and a boost to the Tiffany & Co TIF . (NYSE:TIF) position.

The guru invested in 1.5 million shares of Kirkland Lake Gold, allocating 1.69% of the equity portfolio to the stake. The stock traded for an average price of $36.83 per share during the quarter.

The Peter Lynch chart shows the stock is trading below its fair value, suggesting it is undervalued. The GuruFocus valuation rank of 3 out of 10, however, leans more toward overvaluation. 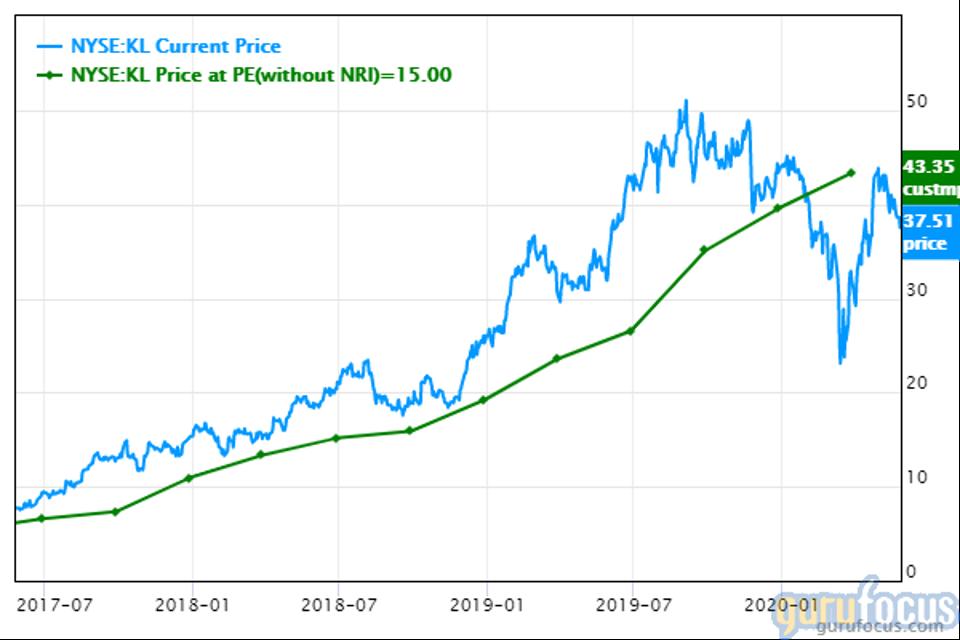 GuruFocus rated Kirkland Lake Gold’s financial strength 9 out of 10. In addition to a comfortable level of interest coverage, the Altman Z-Score of 5 indicates the company is in good standing even though assets are building up at a faster rate than revenue is growing. The return on invested capital also surpasses the weighted average cost of capital, indicating good profitability.

The company’s profitability scored an 8 out of 10 rating, driven by strong margins and returns that outperform a majority of competitors. Kirkland also has a high Piotroski F-Score of 7, which implies operations are in good condition, a business predictability rank of one out of five stars. According to GuruFocus, companies with this rank typically return an average of 1.1% per annum over a 10-year period.

Paulson picked up 223,011 shares of Navistar International, dedicating 0.14% of the equity portfolio to the position. Shares traded for an average price of $29.30 each during the quarter.

The manufacturer of heavy-duty trucks, buses and military vehicles, which is headquartered in Lisle, Illinois, has a market cap of $2.66 billion; its shares were trading around $26.17 on Wednesday with a price-earnings ratio of 15.34 and a price-sales ratio of 0.25.

According to the Peter Lynch chart, the stock is trading near its fair value, an assessment the GuruFocus valuation rank of 5 out of 10 aligns with.

Weighed down by poor interest coverage, Navistar’s financial strength was rated 4 out of 10 by GuruFocus. In addition, the Altman Z-Score of 1.4 warns the company could be at risk of going bankrupt. Regardless, the company may have good profitability since the ROIC exceeds the WACC.

The company’s profitability scored a 5 out of 10 rating on the back of margins and a return on assets that underperform over half of its industry peers. Navistar also has a moderate Piotroski F-Score of 5 and a one-star business predictability rank, which is on watch as a result of the revenue per share declining over the past several years.

With an impact of -8.5% on the equity portfolio, the investor curbed his Allergan holding by 77.38%, or 2.06 million shares. The stock traded for an average per-share price of $188.56 during the quarter.

He now holds 602,130 shares, which represent 4.07% of the total assets managed. GuruFocus estimates Paulson has gained 2.4% on the investment since the second quarter of 2015.

The Irish pharmaceutical company, which focuses on the areas of medical aesthetics, eye care, the central nervous system and gastroenterology, has a $63.66 billion market cap; its shares were trading around $193.02 on Wednesday with a forward price-earnings ratio of 11.89, a price-book ratio of 1.1 and a price-sales ratio of 3.94.

Based on the median price-sales chart, the stock appears to be trading above its historical value. The GuruFocus valuation rank of 4 out of 10 also leans toward overvaluation since the share price and price-sales ratio are near two-year highs. 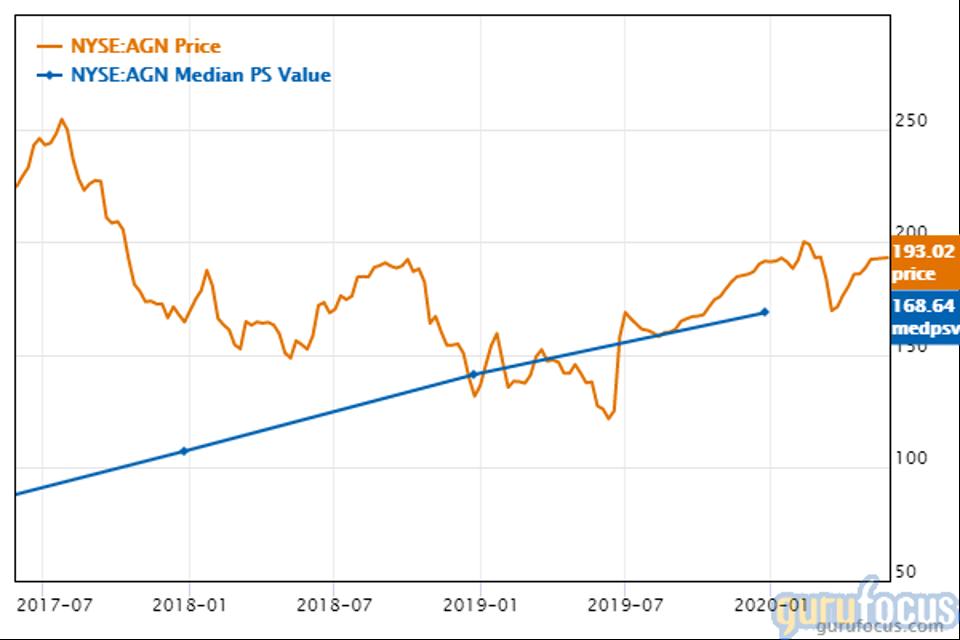 As a result of a low cash-debt ratio of 0.13, GuruFocus rated Allergan’s financial strength 4 out of 10. In addition, the Altman Z-Score of 1.33 warns the company is in distress and could be in danger of bankruptcy.

The company’s profitability did not fare much better, scoring a 5 out of 10 rating on the back of negative margins and returns that underperform over half of its competitors. Allergan also has a moderate Piotroski F-Score of 6 and, even though it has recorded slowing revenue per share growth over the past year, a one-star business predictability rank.

The guru now owns 1.89 million shares of the exchange-traded fund, which represent 10.7% of the total assets managed. According to GuruFocus, he has gained an estimated 53.77% on the investment since the first quarter of 2009.

The ETF, which tracks the performance of the price of gold bullion, has a market cap of $60.9 billion; its units were trading around $160.01 on Wednesday.

The 14-day relative strength index of 49.87 indicates the stock is neither overbought nor oversold.

He now owns 603,800 shares total, which represent 2.98% of the equity portfolio. GuruFocus data shows the guru has lost an estimated 2.73% on the investment since fourth-quarter 2019.

The iconic New York-based luxury jeweler, which has a pending merger with LVMH Moet Hennessy Louis Vuitton SE (XPAR:MC), has a $15.24 billion market cap; its shares were trading around $125.96 on Wednesday with a price-earnings ratio of 28.27, a price-book ratio of 4.64 and a price-sales ratio of 3.47.

The Peter Lynch chart suggests the stock is overvalued. The GuruFocus valuation rank of 1 out of 10 also leans toward overvaluation as the share price and price-sales ratio are near multiyear highs. 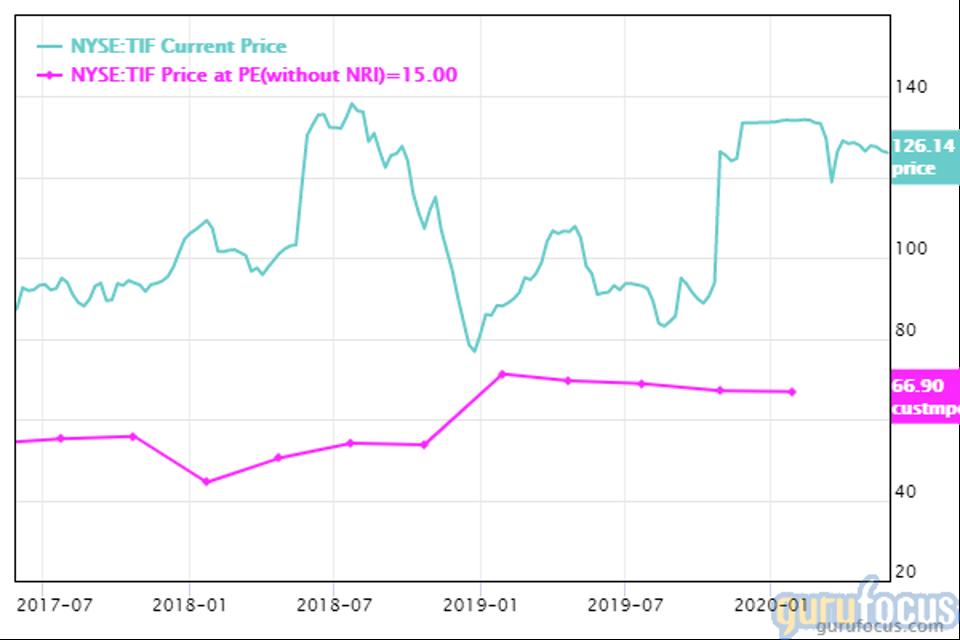 Tiffany’s financial strength was rated 6 out of 10 by GuruFocus, driven by an adequate level of interest coverage and a robust Altman Z-Score of 4.76, which indicates it is in good standing despite the fact its assets are building up at a faster rate than revenue is growing. The ROIC is also higher than the WACC, suggesting good profitability.

The jeweler’s profitability scored an 8 out of 10 rating. Even though the operating margin is declining, the company has strong returns that outperform a majority of its industry peers and a moderate Piotroski F-Score of 4. As a result of slowing revenue and earnings growth over the past 12 months, the 2.5-star business predictability rank is on watch. GuruFocus says companies with this rank typically return 7.3% per year on average.

The guru’s $2.62 billion equity portfolio, which is composed of 33 stocks, is most heavily invested in the health care sector with a weight of 43.68%. 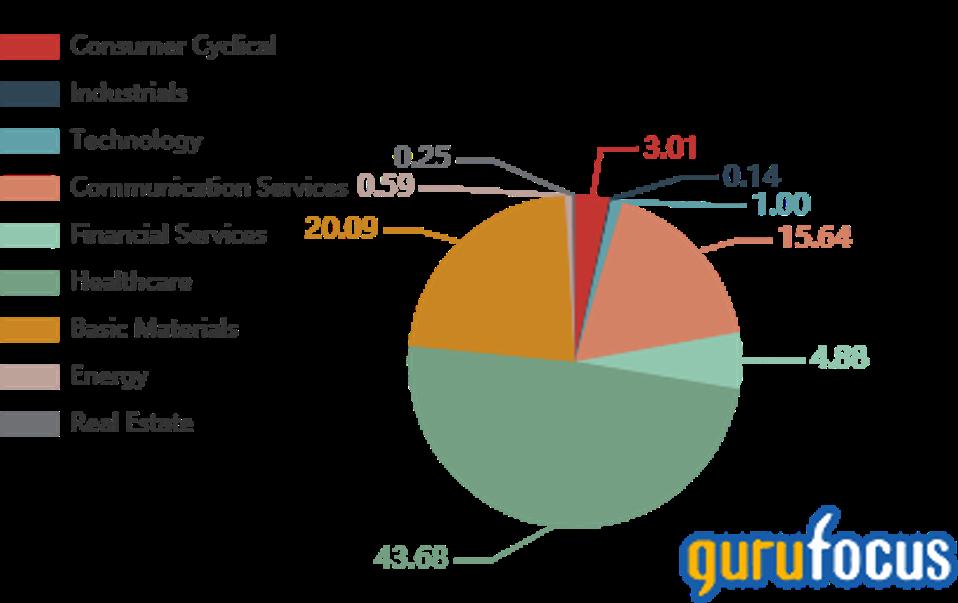