Breaking
NBA-Backed Saliva Coronavirus Test Gets Emergency FDA Authorization
The Amazing High-Yield REIT Strategy For 7.9% Dividends,...
How To Attract Candidates To Hard-To-Fill Positions
Trump: I’m ‘Ready’ To Take Action On Stimulus...
Apple iOS 13.6.1 Release: Should You Upgrade?
Non-PPP Loan Approvals Continue Slow But Steady Rebound
Here’s How To Stay One Step Ahead Of...
Microsoft Outlook Will Store Contacts’ Blood Group And...
How The US Department Of Health & Human...
Why Do Chinese Companies List Their Shares In...
Can You Get Covid-19 Coronavirus From Food? Frozen...
Winklevoss Twins Tell Bar Stool’s Dave Portnoy To...
How Democrats And Republicans Would Tackle The Enduring...
Berkshire Hathaway Doubles Down On Net Lease REIT,...
70% Of Americans: Ban Foreign Apps
This Week In Credit Card News: Pandemic Brings...
Home Business Jon Jones Happy To See Corey Anderson Eat His Words At UFC Fight Night 167
Business 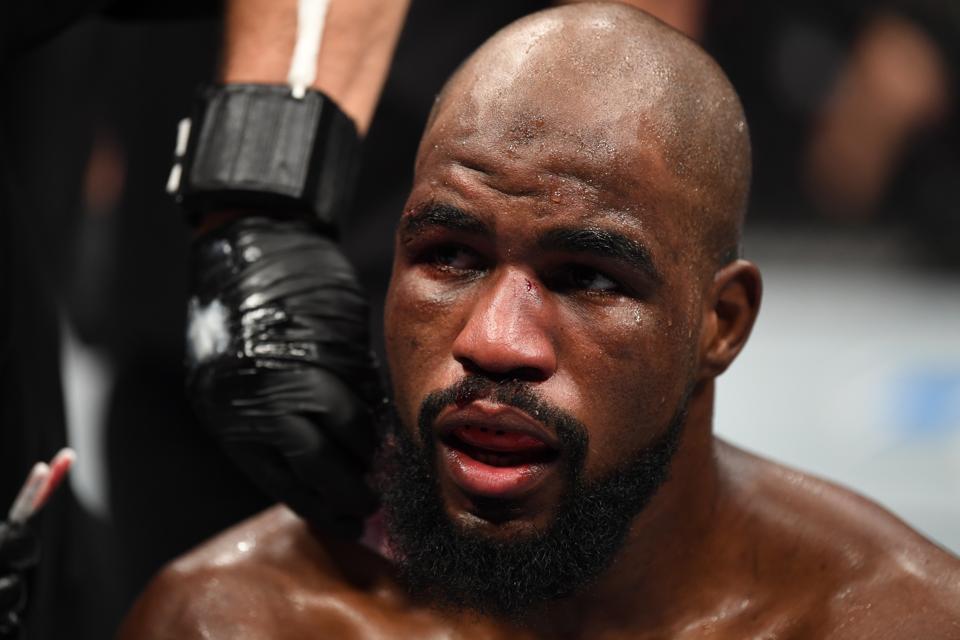 \There are a handful of phrases popular with folks involved, even tangentially, with MMA. At the top of that list is “don’t let it go to the judges.” Not far behind is “don’t tempt the MMA gods.” A few clicks down we’ll find, “don’t look ahead.” Last night, Jan Blachowicz adhered to the first of those phrases when he knocked out Corey Anderson in the main event of UFC Fight Night 167. According to UFC light heavyweight champion Jon Jones, who sat cageside for the New Mexico event, Anderson fell victim to the second two.

Anderson entered the fight on a four-fight winning streak. He was the fifth-ranked fighter in the official UFC light heavyweight rankings and the favorite to win this bout and possibly earn a shot at Jones’ title. However, in the second half of the first stanza, Blachowicz ended the fight with a counter left hand that turned out Anderson’s lights.

While the cageside medical crew attended to Anderson’s needs, Blachowicz, who was ranked No. 6 in the division, found Jones at cageside and let him know that he wanted to challenge the champ for the 205-pound crown.

Jones, who defeated Dominick Reyes in a controversial decision last weekend at UFC 247, didn’t shy away from the man who confronted him from inside the octagon.

“That was an awesome fight,” Jones told MMA Junkie after the event. “I thought Jan Blachowicz did a hell of a job. His boxing looked great.”

The stoppage earned Blachowicz his third straight victory. He will surely rise at least one spot in the rankings when the UFC releases them early next week. Blachowicz won a $50,000 “Performance of the Night” bonus for his victory.

As for Anderson, who had been talking about battling Jones for quite some time, the champ seemed to think he was a victim of his own hubris.

“Honestly, I think he was more worried about fighting me than fighting Jan Blachowicz,” Jones said. “It showed a valuable lesson of what happens when you look past opponents. I think Corey Anderson tasted humble pie tonight.”

Jones’ assessment was more blunt when he spoke to ESPN+.

“I was happy to see Corey Anderson eat his words.”

Ask Larry: Will My Wife Get A 50% Spousal Benefit When She Reaches FRA?