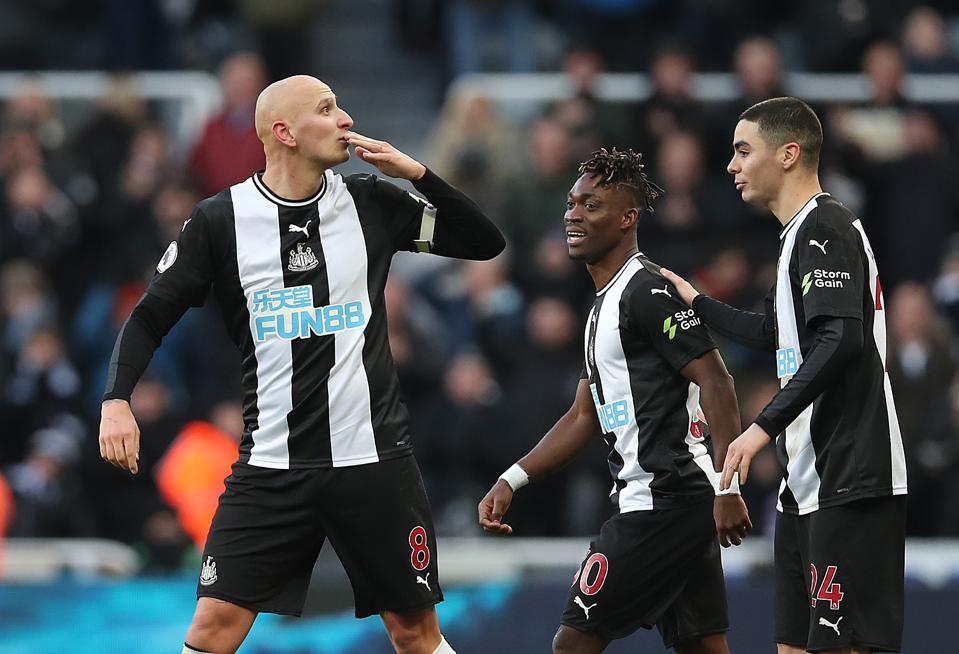 Can the real Newcastle United please stand up? Monday night at Villa Park has been characterised by a number of different cliches, the most prominent of which was ‘wake up call’. It was certainly a sobering evening for all involved, as the bubble burst after two successive victories. Suddenly, with Premier League champions Manchester City visiting St James’ Park on Saturday, the fear, worry and doubt that has engulfed Tyneside over recent months returned. Steve Bruce knew what he was getting himself in for when he replaced Rafael Benitez this summer, but he has witnessed first hand how much each result dictates the mood of the area. That is why, as he woke up on Sunday morning, he’ll have felt much more relaxed.

Pep Guardiola won’t talk about the title race, but after the game, Bruce was asked whether Jonjo Shelvey had just won the league for his former club Liverpool. The Newcastle boss laughed and said that he couldn’t go that far, but the midfielder had certainly dealt a damaging blow with his 88th minute equaliser. Kevin De Bruyne thought he had won it for the visitors four minutes earlier, after Jetro Willems cancelled out Raheem Sterling’s opener in the first half.

There is arguably nobody who best represents Newcastle’s current form than Shelvey; supporters reading the teamsheet prior to kick off will have been nervous as he lined up against De Bruyne, David Silva and Ilkay Gundogan, because of how passive an ineffectual he was against Aston Villa. Even before his goal, though, he was already playing his part in the perfect performance on the day. Bruce got the balance right in his tactical approach; Newcastle didn’t sit so deep that they couldn’t get out of their half, but rather utilised their pace to attack City’s high line on the counter attack. Shelvey did a similar job to Sean Longstaff in the last meeting between the sides back in January, which the Magpies won 2-1; many expected him to come in and do it again after his return from suspension, but Bruce and Shelvey were vindicated for his continued selection. 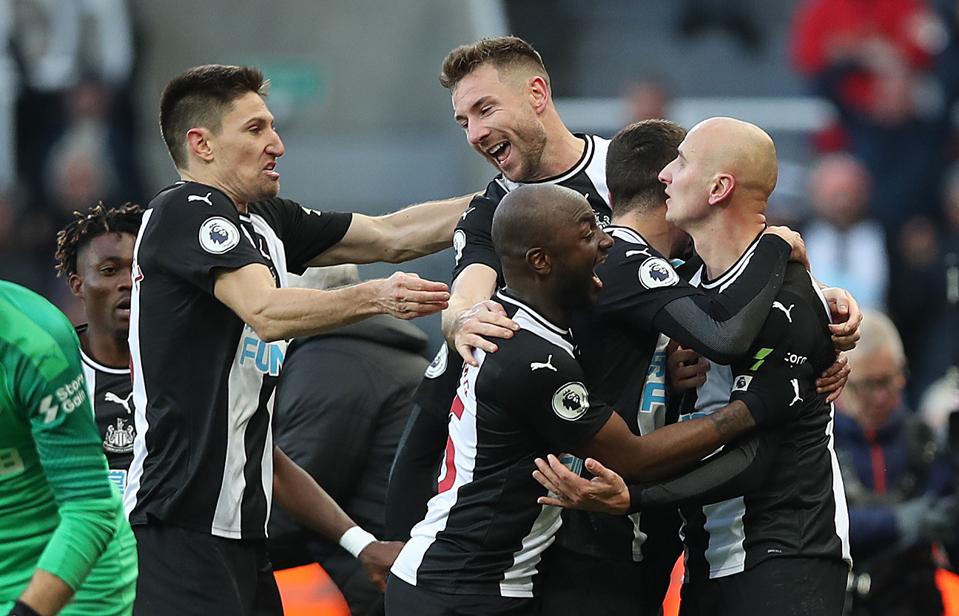 Inconsistency continues to plague Bruce’s Newcastle side, and that is why the headlines have been so erratic. They were staring down the barrel of a tough few weeks last week, but after a draw that feels like a win, the mood has been lifted. Everything about Newcastle is hyperbolic, that is just the way it is, and Shelvey embodies that, either deserving to be cast aside as he was for long periods under Benitez last season, or being lauded as a match winner who should be the first name selected; in the eyes of many supporters, there is rarely any middle ground.

The major reason for that could be made clear in three days time, as Newcastle travel to South Yorkshire to face Sheffield United at Bramall Lane. Chris Wilder’s team will put Newcastle on the back foot, likely in a manner that City struggled to at the weekend; they have played with great balance in every game, currently finding themselves seventh in the table. While they won’t offer as much space in behind for the likes of Allan Saint-Maximin and Miguel Almiron, who registered his first assist for Willems’ goal at the weekend, they’ll also play with intensity going forward. If Newcastle, and Shelvey particularly, are as passive as they were at Villa, they could fall against a side that has already beaten Arsenal, held Manchester United and given Liverpool a scare at home. As impressive as Newcastle were on Saturday, their issues on the road mean that the defeat at Villa has to be the reference they look to in preparation.

Overall, there is little doubt that Bruce has proven some critics wrong and the tide of opinion is turning amid sections of the fanbase. No matter what anybody says, whatever the politics at Newcastle, results will always breed positivity; but a basic level needs to be found in order to reduce weekly hysteria. In reality, the club is probably where they ought to be in terms of squad strength and quality, but critics of Bruce and ardent supporters of Benitez who still believe passionately that he should be in charge will say that there was more cohesion before; they knew what was coming in every game under the Spaniard regardless of the result. That identity is finally developing for Bruce after a lot of rethinking on his part, but it isn’t quite there. Equally, though, Newcastle are four points better off than at this stage last season. 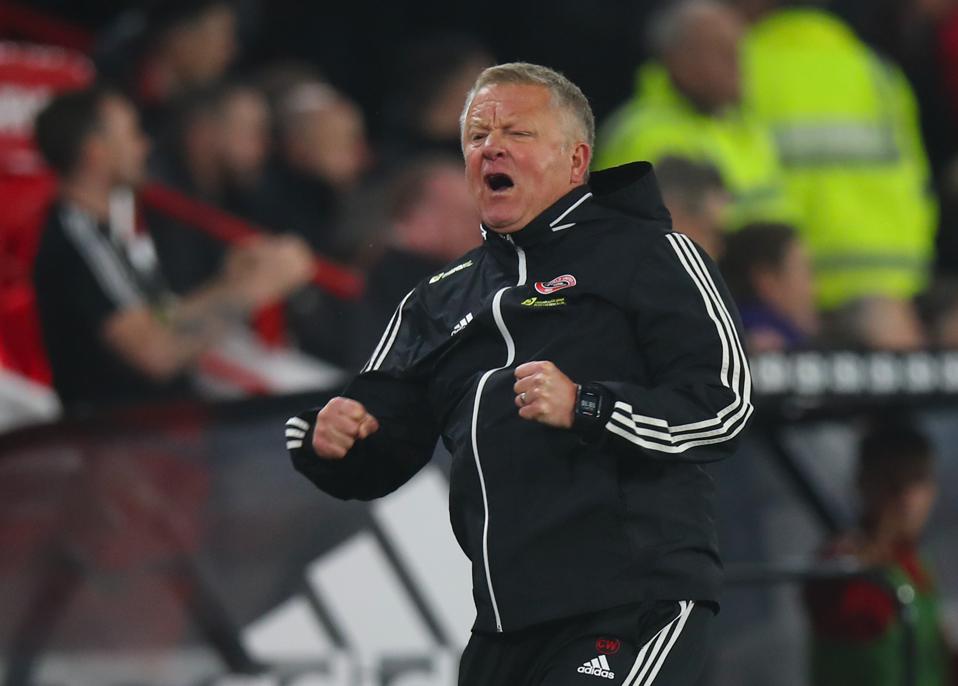 SHEFFIELD, ENGLAND – NOVEMBER 24: Chris Wilder the head coach / manager of Sheffield United … [+] celebrates the VAR decision to award his team a goal to make the score 3-3 during the Premier League match between Sheffield United and Manchester United at Bramall Lane on November 24, 2019 in Sheffield, United Kingdom. (Photo by Robbie Jay Barratt – AMA/Getty Images)

It is important to not overreact after each game to create unnecessary pressure, but while Saturday showed Newcastle do have the mentality to battle once again this season, and more ability than they are often given credit for, their shortcomings have also been laid bare at times this season. Another game has passed without a goal for their front three, and although some pressure has been lifted from Almiron’s shoulders, until they are regularly contributing at the top end of the pitch, that feeling of true progression will be put on ice.

They did see more of the ball on Saturday, which has been a major issue and a reason why they’ve often received more sympathy than stick. That is where Shelvey comes in; he needs to perform in every game, if he doesn’t, the tactical implications can be huge. He and Newcastle on the whole grabbed positive headlines this week, but the nature of both suggests everything could flip at the drop of a hat. Sheffield United away is the kind of game that can magnify their issues once again, and that has to be a warning. Victory, though, comes with a sizeable carrot; it would put Newcastle a point shy of halfway to the magic total of 40, which is seen as the benchmark for Premier League safety. Everyone must stay grounded, whatever happens, but there has to be more positivity than their last away outing in the league.

Want A More Creative Team? Help Them Be More Mindful

Functionality, Form & Freedom Brought To You By...

Is Biden Hardly — Or Trying Hard To...