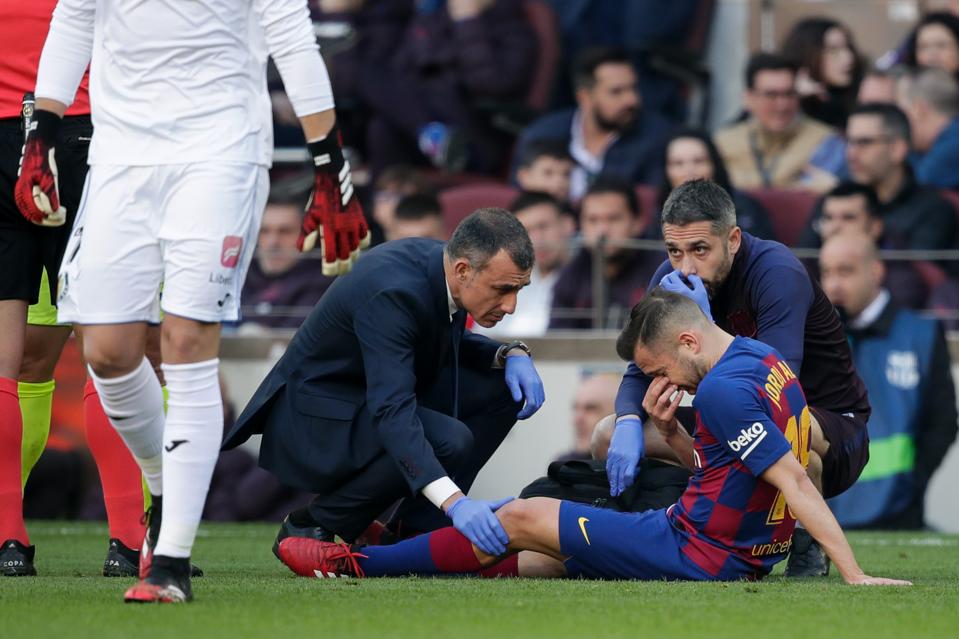 Coming off 22 minutes into FC Barcelona’s 2-1 win over Getafe in La Liga on Saturday, Jordi Alba’s suffering of a right abductor injury was confirmed at the interval through an official post on the club’s social media channels, as reproduced below.

Adding more after the full-time whistle, a second post stated that Alba was “out” and “his recovery will determine his availability”.

Through Javier Miguel however, Madrid-based newspaper AS subsequently claimed they can guarantee that the Spain left back will be unavailable for a period of at least three weeks.

In a huge blow to the Blaugrana, this means the 30-year-old will not be available for huge clashes against Real Madrid on March 1 – in a tie that could decide this year’s Spanish title race – and, before that on February 25, Napoli in a Champions League last 16 first leg at the Stadio San Paolo.

His level of performance slightly improving this afternoon, by providing an assist for what turned out to be the winner from Sergi Roberto when replacing Alba, Junior Firpo will be assigned the task of filling the crocked star’s boots until he has returned to fitness.

Even with the best possible treatment, Alba is not expected to return until Real Sociedad travel to the Camp Nou on March 7th.

In and out of the first team in 2019/2020, this is the third major setback the former Valencia player has suffered this term.

In early November, following a 0-0 draw with Slavia Prague on the continent, a muscle issue left him on the sidelines for a period of 37 days.

Such was the lack of trust fired manager had in Firpo, right back Nelson Semedo was made to switch flanks and stand-in until he too succumbed to a calf knock.

Moving forward, this is a possible alternative for Valverde’s successor Quique Setien too yet their shared history together at Real Betis indicates that Firpo will be given a chance.

A Raise To $11 An Hour? That’s Still Not Enough, Union Says At Airport Protests