Breaking
Behind The Curtain—Chapter 11 From The Inside—Chapter 10—The...
Three Classic Ways To Get New Business
With Hope, Perseverance And Faith, Two Friends Are...
Exxon Mobil Shares Cross 10% Yield Mark
T-Mobile for Business BrandVoice: From Sci-Fi To Everyday...
How To Move Your Career Forward By Making...
A Conversation With Jill Houghton, President And CEO...
VW’s Electric ID.4 Lands In Q1 2021 With...
Would Biden Enact Broad Student Loan Forgiveness? These...
Why You Must Slay Your Mindset And Stop...
Surviving The Pandemic With Your Culture Intact: How...
The Disruption Of The Consulting Industry Is Here
Remote 101: How To Create Meaningful Connections For...
How To Reassess Your Finances To Align Your...
7 Things Every Entrepreneur Should Automate
Volkswagen’s Truck Unit Ties Up With TuSimple On...
Home Finance Journalist’s Murder Darkens The Story Of “Blockchain Island”
Finance 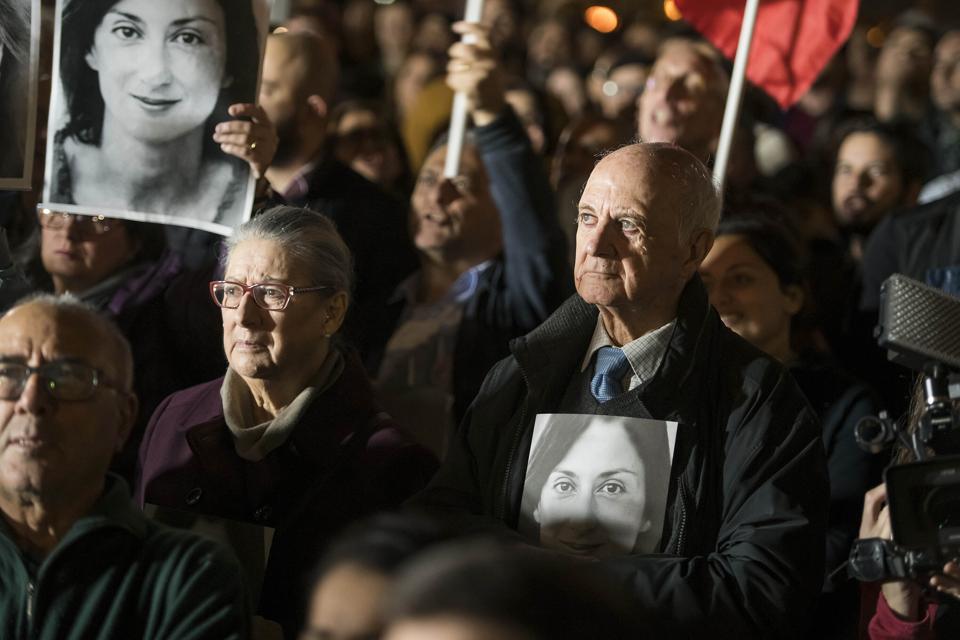 Parents of the murdered journalist Daphne Caruana Galizia, Rose, left, and Michael Vella, right, … [+] attend a protest outside the office of the Prime Minsiter of Malta Joseph Muscat after his chief of staff Keith Scembri was arrested and questioned regarding the murder of slain journalist Daphne Caruana Galizia. Muscat said Friday that police found no grounds to hold Keith Schembri, his former chief of staff in custody. (AP Photo/Rene Rossignaud)

On Sunday, December 1st, Malta’s Prime Minister Joseph Muscat, the principal advocate of Malta’s “Blockchain Island” narrative announced that he was going to resign in mid-January. The main cause of this shock resignation is the ongoing investigation into the murder of Maltese investigative journalist Daphne Caruana Galizia. Activists would soon storm Malta’s government headquarters to ask for his immediate resignation. European MEPs have backed a call for him to resign immediately as well.

For decades, Caruana Galizia refused to give up her dogged journalism, even though she was arrested by the Malta Police Force twice and sued multiple times. At the time of her death, she was facing 48 libel suits. In 2016, a year before her death, she wrote a series of sensitive reports on the links between the Panama Papers and Maltese politicians — accusing Prime Minister Muscat and two of his closest aides of selling Maltese passports to the government of Azerbaijan. She was described by Politico as a “one-woman WikiLeaks”.

On October, 16th, 2017, Caruana Galizia was assassinated through the use of a car bomb a block away from her house. This would kick into motion a series of events that would darken the idealism surrounding “Blockchain Island” — and undo some of its most prominent architects.

As public protests started to form calling for the resignation of Maltese government officials implicated in the murder, a cascading series of resignations suddenly gained nearly unstoppable momentum.

From her grave, Caruana Galizia would cause the resignation of a few prominent ministers of the “Blockchain Island” administration, and finally, Prime Minister Muscat himself.

Malta’s ascent in the blockchain and cryptocurrency world has come with a combination of savvy legislation and branding. In 2018, the island legislature passed a bill creating a framework for distributed ledger technologies. Malta had become famous for hosting blockchain-related events, most notably the Malta Blockchain Summit.

In 2018, Binance, one of the world’s largest cryptocurrency exchanges (and at many times the world’s largest by trading volume), publicly announced that it was moving to Malta after Japan’s Financial Services Agency issued a regulatory warning. At the time, Binance founder Zhao Changpeng personally thanked Prime Minister Muscat on Twitter for welcoming the company and declaring Malta’s aim to be “global trailblazers in the regulation of blockchain-based businesses”.

Probably unbeknownst to him and many others, the uncertain techno-optimism that came with the move would soon be tested by bitter seeds planted as early as the 1980s — and which would come to bloom fully in the year to come.

Malta has always hidden remnants of political turmoil in its past well with its sleek Mediterranean beauty and near-pristine financial reputation, a fact that may have driven blockchain and cryptocurrency businesses to the island despite its short track record with the technology.

It’s possible that few of these new residents would know about the 1980s in Malta, where political violence spilled into the streets and an electoral scandal nearly brought the country to the brink of civil war.

The Tal-Barrani clashes, one of the most serious flashes, involved members of the now governing Labour Party and the ascendant Nationalist Party coming to blows. It culminated in the drive-by murder of Raymond Caruana, a Nationalist Party activist. In Malta’s courts, an accused perpetrator was revealed to be a victim of a Labour Party frame-up. The murder remains unsolved more than thirty years later, a sad prologue to what might still happen in Daphne Caruana Galizia’s case.

The first ministers to resign due to the ongoing Caruana Galizia investigation were the Tourism Minister, Konrad Mizzi and the Economy Minister, Chris Cardona, who chose to suspend himself. Minister Mizzi was working on a blockchain-enabled repository for tracking carbon emissions. Minister Cardona clarified cryptocurrency regulations in meetings and sought to define what makes Malta a safe haven for cryptocurrencies. Both were stalwart allies of Prime Minister Muscat, who in front of the United Nations declared cryptocurrency to be “the future of money” and flagged Malta’s determination to become “Blockchain Island”.

Caruana Galizia would comment on that speech in her blog, Running Commentary, saying she was “taken aback”. She would conclude by writing “Malta is set to become the bitcoin money-laundering capital of this part of the world – and that the preparations are already being made for it. And that whoever has a vested interest in the heightened use of cryptocurrencies is already [funneling] money into the Labour Party and a couple of Panama companies, and calling the shots.”

Her death effectively stymied the political component of that statement: the ruling Labour Party and many cryptocurrency-friendly administration members look to be gone, for now, and it looks unlikely that policy on any front will get much traction in the midst of public protests and political turmoil.

Daphne’s murder also darkens the story for “Blockchain Island” morally. Can a movement which drives some of its first political roots and schisms from the support of Wikileaks stand by in apathy while a murdered journalist is present in a favored hotspot?

There is much in what Caruana Galizia wrote that cryptocurrency adherents would strongly disagree with. Though she was concerned with Bitcoin as a tool of the rich and powerful to evade tax controls, it might have been pointed out that dissidents and journalists like her have been using the tool when they are faced with state oppression that extends to financial control, from Russia’s Alexei Navalny to Hong Kong Free Press accepting Bitcoin donations.

Though she was able to do it, it’s an open question how many people (especially in situations of near-total totalitarianism extending to financial control) can really make meaningful dissent transacting in the default financial system and currency of their most daunting foe.

There is much in what Malta did in giving a platform, message and incentives for innovative businesses to move and experiment with financial systems that was positive on this front, that helped not just delegate power — but also meaningfully empower underdogs and chip away at the power of encrusted incumbents, many of whom Daphne would have criticized in her publication. It’s important not to throw the baby out with the bathwater — and it is entirely possible that blockchain and cryptocurrency businesses can do much good even in a system of favorable laws and unfavorable men.

Yet, a final parting thought remains. In her last post before her death, Caruana Galizia wrote “There are crooks everywhere you look now. The situation is desperate.” a rallying cry for the public protests now sweeping Malta. Perhaps now is a good of time as any for cryptocurrency adherents and businesses to evaluate what crooks they might be aiding.

Mindset Matters: The Influence of Entertainment And The Significance Of Culture Change In The Business Of A New Decade