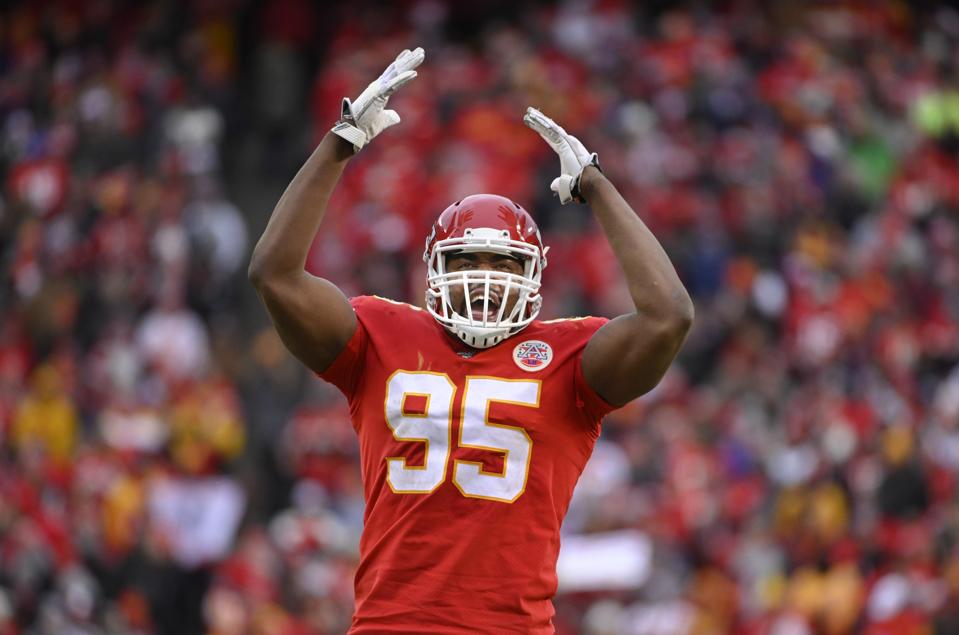 Kansas City Chiefs defensive end Chris Jones fires up the crowd against the Los Angeles Chargers … [+] during the second half of an NFL football game in Kansas City, Mo. in 2019. (AP Photo/Reed Hoffmann)

But in a complete reversal of fortune, he’s now the third highest paid defensive tackle in all of football in terms of yearly average salary.

According to ESPN’s Adam Schefter, Jones has received a four-year, $80 million deal. That averages $20 million a year and includes $37 million due at signing and $60 million guaranteed for injury. (There’s also $5 million more possible in incentives.)

Los Angeles Rams defensive tackle Aaron Donald, who does play myriad positions on the defensive line, is the highest paid defensive tackle in the NFL and deservedly so. The three-time Defensive Player of the Year’s six-year, $135 million contract averages $22.5 million a year.

Indianapolis Colts defensive tackle DeForest Buckner, who the San Francisco 49ers traded in the offseason because they knew they’d have trouble re-signing him, signed a four-year, $84 million contract averaging $21 million.

Though he didn’t record a sack, Jones’ pressure helped force Jimmy Garoppolo’s second-quarter interception. He also deflected multiple passes, which thwarted the 49ers offense in the fourth quarter and enabled the Chiefs to come back from 10 points down.

“Sacks really don’t count and they don’t matter,” Jones said. “As long as you affect the game in any type of way, that’s what matters.”

With Jones signed to a new deal, the Chiefs now have a strong case of reaching the Super Bowl in 2020 and beyond.

“I’m excited for the future ahead,” said Patrick Mahomes after signing a 10-year extension last week that could reach more than $500 million.

Tyrann Mathieu is the defense’s leader and heart and soul. But Jones is the defender most capable of changing the game. He has 24.5 sacks the last two years even after making the transition from 3-4 defensive end to 4-3 defensive tackle in 2019.

In an extraordinary 2018 season, he had at least one sack in 11 straight games, which represents an NFL record.

Jones had until the July 15 deadline to complete a long-term deal. The prospects had looked so dire that he exchanged tweets with New York Jets running back Le’Veon Bell, who held out the entire 2018 season, about possibly sitting out.

However, Chiefs general manager Brett Veach had maintained throughout the offseason that signing Jones was a priority and he proved to be a man of his word.

“We certainly are going to work to retain him not just for next year,” he said, “but for the future.”

With Jones and Mahomes in the fold and 20 of 22 starters back from last year’s championship team, the Chiefs not only seem to be a great candidate to repeat, but to also form the NFL’s next dynasty.

In fact after Super Bowl LIV, Jones compared the Chiefs to the NBA’s most recent version.

“We’re like Golden State in their prime, baby,” he said.