Breaking
Apple Dominates Microsoft In MacBook Pro Vs Surface...
Do You Know If You’re Prepared For Retirement?
The Amazfit GTS 2 Mini May Be One...
Hotelier/ Billionaire Philanthropist Jonathan Tisch: What A Hospitality...
More Entrepreneurship, Less Recidivism Among The Formerly Incarcerated
Do S&P 500 Investors Really Want To Buy...
Small Business Burnout? Use This Time To Rest,...
7 Native American Inventions That Revolutionized Medicine And...
Cannabis Industry Expects A Green Christmas
How Small Businesses Can Survive The Growing Pandemic
Check These ‘Risky’ iPhone 12 Security Settings Now—Here’s...
Five Key Findings From The Highly-Anticipated ‘Future Of...
How To Pivot A Customer-Facing Hospitality Business Into...
How To Be A Better Leader For 2021
iPhone ‘Weak Security’ Wi-Fi Warning: Here’s What It...
Stock Market: ‘Fundamental-Lite’ Speculation Is Here – It’s...
Home Business Kanye West Announces He’s Running For President
Business 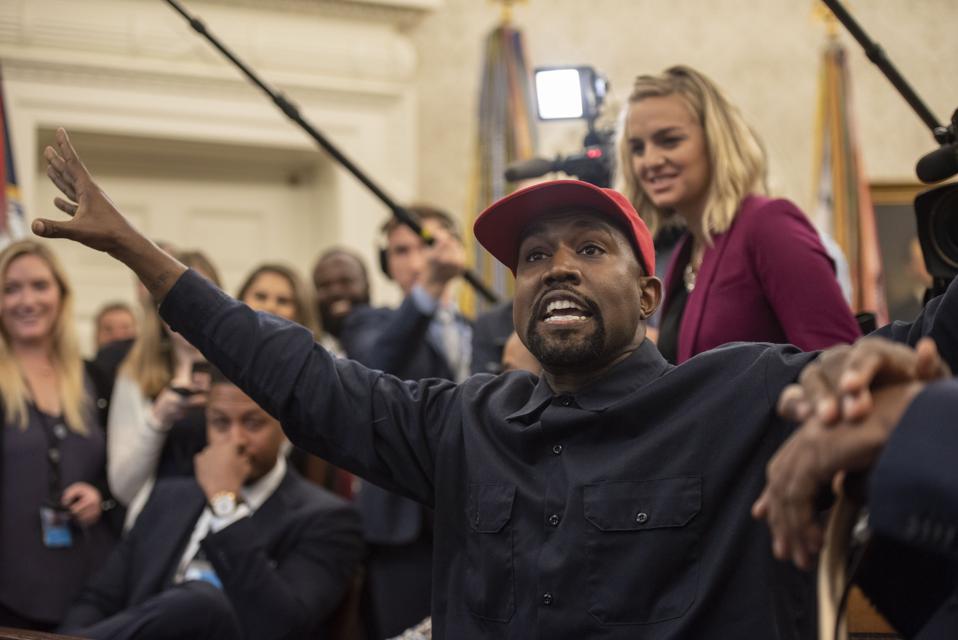 WASHINGTON, DC – OCTOBER 11: Rapper Kanye West speaks during a meeting with President Donald Trump … [+] in the Oval Office of the White House in Washington D.C. on October 11, 2018. (Photo by Calla Kessler/The Washington Post via Getty Images)

Kanye West is an artist, producer, record label executive and fashion designer, but that’s apparently not enough for the multi-hyphenate. Now, the hip-hop powerhouse is looking to add another job to his ever-expanding resume: politician.

The rapper took to Twitter on America’s birthday (July 4) to officially announce he is running for the highest office in the land. The superstar began his message by writing, “We must now realize the promise of America by trusting God, unifying our vision and building our future,” and he quickly got straight to the point by stating quite plainly, “I am running for president of the United States!” He then added the hashtag #2020VISION, which may be something he continues to use moving forward.

This is not the first time West has talked about running for the biggest job in the country, but now he seems determined, based on his word choice. The Grammy winner was open about his ambitions as recently as this past November, when he said “When I run for president in 2024, we would’ve created so many jobs that I’m not going to run, I’m going to walk” during an event this past November. Now it appears he’s moved his hopes up one cycle.

West has been hinting at a jump into politics for some time now, so it’s difficult to say whether this tweet is any different from past revelations. During a speech at the MTV Video Music Awards in 2015, he revealed he was planning on running for president in 2020, and though much was made of the announcement at the time, not a lot seemed to come from it.

West raised eyebrows for years with his outspoken support of President Trump, which has ebbed and flowed with time. The titan of hip-hop ranted about how he would have voted for the Republican candidate in 2016 (had he voted at all), and after a short stay in a hospital due to exhaustion, West visited the future leader at his New York City residence, where they posed for photographs.

For the next two years, West praised Trump in various interviews on radio and TV and the two tweeted at one another. The rapper sported one of the President’s red and white Make America Great Again hats in public (including when he performed on Saturday Night Live), and he even spent time surrounded by cameras with Trump in the Oval Office.

After months of vocally supporting the leader of the free world, West changed his position and distanced himself from the controversial politician. In late 2018, he tweeted “My eyes are now wide open and now realize I’ve been used to spread messages I don’t believe in. I am distancing myself from politics and completely focusing on being creative,” and since then he’s been quieter on the subject, focusing primarily on music and fashion.

West is already facing a very busy second half of 2020 without a run for president, as he recently signed a 10-year deal with Gap GPS (worth a reported $100 million) and he’s just recently released two new songs, including “Wash Us in the Blood,” which appears to be the first single from his upcoming album God’s Country.

The musician’s tweet could be a serious announcement, or it may be another in a long line of grand pronouncements that don’t seem to carry much weight—at the moment, it’s tough to tell. Only in the coming weeks and months will it become clear if West is going to invest in his candidacy, or if little will come of this venture.