Breaking
NBA-Backed Saliva Coronavirus Test Gets Emergency FDA Authorization
The Amazing High-Yield REIT Strategy For 7.9% Dividends,...
How To Attract Candidates To Hard-To-Fill Positions
Trump: I’m ‘Ready’ To Take Action On Stimulus...
Apple iOS 13.6.1 Release: Should You Upgrade?
Non-PPP Loan Approvals Continue Slow But Steady Rebound
Here’s How To Stay One Step Ahead Of...
Microsoft Outlook Will Store Contacts’ Blood Group And...
How The US Department Of Health & Human...
Why Do Chinese Companies List Their Shares In...
Can You Get Covid-19 Coronavirus From Food? Frozen...
Winklevoss Twins Tell Bar Stool’s Dave Portnoy To...
How Democrats And Republicans Would Tackle The Enduring...
Berkshire Hathaway Doubles Down On Net Lease REIT,...
70% Of Americans: Ban Foreign Apps
This Week In Credit Card News: Pandemic Brings...
Home Business Karim Benzema Continues To Excel In Ronaldo’s Absence At Real Madrid
Business 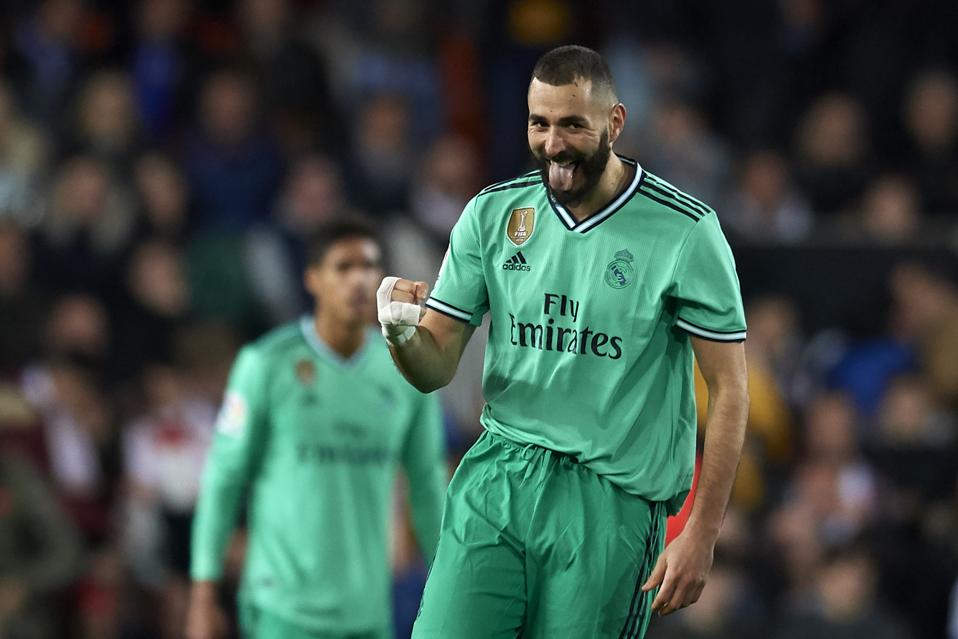 Karim Benzema has been on fire at Real Madrid since Cristiano Ronaldo left. (Photo by Jose … [+] Breton/Pics Action/NurPhoto via Getty Images)

If we cycle back to 18 months or so ago, Real Madrid’s Karim Benzema was being routinely booed and whistled every time he stepped out on the Santiago Bernabeu pitch.

Yes, by his own supporters!

It wasn’t just the odd gripe either. This was thousands of supporters letting the Frenchman know that they were unhappy with his effort for their club.

As fickle as they come, Los Blancos’ aficionados have quickly changed their tune.

Since Cristiano Ronaldo left for Juventus, Benzema has been on fire, free of the shackles of having to always look for the Portuguese rather than write the headlines himself.

Whilst Ronaldo clearly made Real a successful outfit, for players such as Benzema, the status quo is much more to his liking now.

What the supporters failed to recognise too, is that the Frenchman has always been a world class striker.

Moreover, how many players do you know that would stand by, season after season, and play a role that wasn’t a natural one, purely for the benefit of another?

That’s effectively what Benzema did for years. As a target man with his back to goal, there aren’t too many better exponents than the No.9, and yet he was rarely allowed to give his best as the main striker.

He wasn’t bad in a wider role, far from it in fact, but equally Real were never going to get the best out of him by keeping him there.

That’s why, when Ronaldo moved, it killed two birds with one stone, and it finally gave Benzema the opportunity to show the supporters his true worth.

President, Florentino Perez, had always stood by the centre-forward during those hard times, when radio shows and column inches were filled with opinion that Benzema was ‘done’ at the club.

Perez, and Zinedine Zidane, consistently left no one in any doubt as to the esteem that both held him in, and that faith has paid off handsomely.

His goals to games ratio is as good as it’s ever been, and his associative play is still of the highest level.

In short, Benzema has re-established himself as Los Blancos’ go-to guy for goals and assists.

He is as vital to Real at this point as Ronaldo was during his time at the club, and were the Frenchman to get injured for an extended period, there’s every reason to believe that it would hurt the club in their fight to wrestle the La Liga title back from Barcelona.

It says much that he’s managing to keep much younger pretenders to his throne at arms length, but a period of enforced rest in games were Real would be expected to win isn’t beyond the realms of possibility.

Benzema will certainly be required to spearhead the charge at the business end of the campaign in all competitions, and therefore will need to be at his optimum level.

As long as he stays fit and well, he will remain one of the first names on the Real Madrid team sheet, and that’s good news for everyone.

Manchester United Cannot Hide The Gulf Between Them and Liverpool