Katherine Johnson Won The Space Race With The Power Of Math 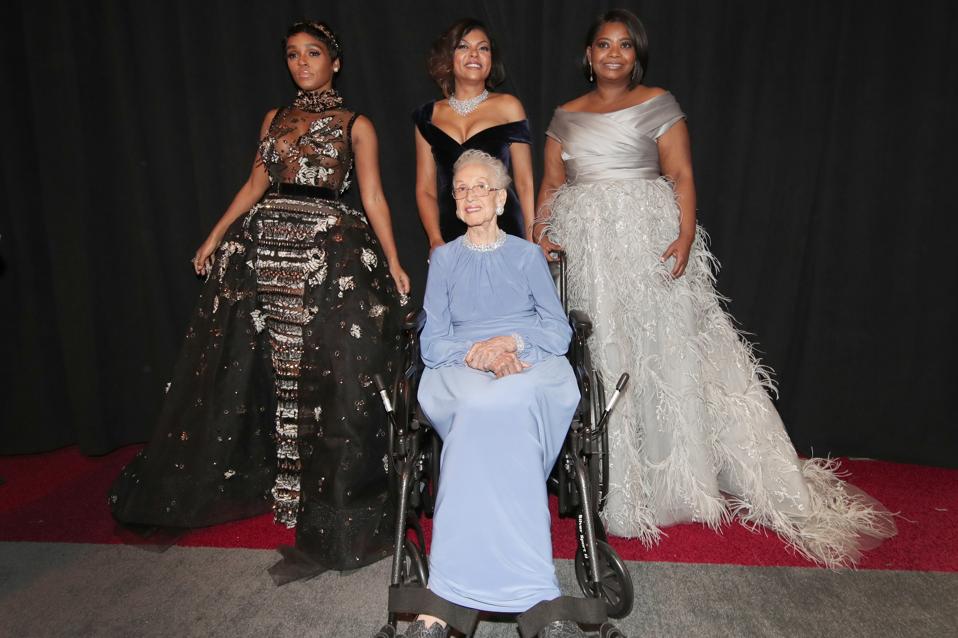 Not all heroes wear capes. Some heroes wear skirts and glasses to fight racism and sexism, chart paths to the stars, and bring imperiled astronauts safely home from the Moon: like NASA mathematician Katherine Johnson, who died this week at the age of 101.

Not All Heroes Wear Spacesuits

In the 1960s, even Johnson’s presence as a black woman in the Spacecraft Controls Branch at NASA – where her name appeared on published research reports and astronauts refused to fly unless she calculated their trajectories by hand – was revolutionary. The 2016 book and movie Hidden Figures celebrated how Johnson and her colleagues faced, and matter-of-factly dismantled, racist and sexist barriers. But even without the hurdles she had to overcome, her role in the U.S. space program would still have earned NASA Administrator Jim Bridenstine’s description of Johnson as “an American hero.”

Today, many Americans still remember the names of the earliest astronauts: people like Alan Shepard, John Glenn, Neil Armstrong, and Buzz Aldrin. But their flights weren’t solo efforts. Most of us don’t know the names of the people behind the scenes who made those flights happen: teams of people designing rockets, capsules, lunar rovers, and spacesuits – and whole factories full of people building them.

And you can’t just point a rocket up at the sky and hope for the best; every flight needed a planned trajectory, and even the timing of the launch had to take into account Earth’s rotation and path around the Sun. That required a series of precise, complicated calculations, which in the 1960s had to be done entirely by hand. And for some of the most important flights in the early space program, it was Katherine Johnson who did them.

Behind The Scenes At NASA

Alan Shepard became the first American in space on May 5, 1961. His Friendship 7 capsule lifted off from Cape Canaveral, Florida at the top of a Mercury-Redstone rocket, following a ballistic arc out of Earth’s atmosphere and into space, then back down to a watery landing in the Atlantic Ocean. And Johnson worked out the whole thing by hand. Even after returning to Earth, Shepard’s life depended on Johnson’s behind-the-scenes work; recovery crews relied on Johnson’s impeccably precise calculations to find Freedom 7 in the vastness of the North Atlantic.

“Millions of people around the world watched Shepard’s flight, but what they didn’t know at the time was that the calculations that got him into space were done by […] Katherine Johnson,” said then-deputy director of NASA’s Langley Research Center 55 years later, when NASA opened the Katherine G. Johnson Computation Research Facility at Langley.

In fact, she calculated the flight trajectories for all of the Mercury flights, including the 1962 mission that made John Glenn the first American to orbit Earth. NASA had acquired some digital computers by then, but many in the agency – including Glenn – didn’t quite trust the newfangled machines yet. Glenn trusted Johnson, though and insisted that she check the calculations before he agreed to fly. Over the next several years, Johnson’s mathematical accuracy often provided the benchmark against which NASA measured the reliability of its digital computers.

And in 1969, when the Apollo 11 crew flew to the Moon, they did so on a trajectory that Johnson helped calculate. Johnson worked out the complex orbital dynamics of getting the lunar model off the lunar surface to its rendezvous with the command module in lunar orbit, then getting the reunited spacecraft back to Earth.

And in 1970, her work saved the lives of the Apollo 13 crew when an oxygen tank ruptured 330,000 kilometers (210,000 miles) from home. To survive, the crew had to pile into the lunar module, using it as a “lifeboat” to save what was left of the command module’s oxygen supply for re-entry. From there, they had to make a loop around the Moon to put themselves back on track to return to Earth.

Every time Johnson worked on a space mission, she calculated backup trajectories, which would get the crew home if an emergency disrupted the original flight plan. She also devised backup navigation charts; if a spacecraft’s electronic navigation systems failed, astronauts could manually take sightings of a single star to find their way home again. The Apollo 13 crew used Johnson’s charts and backup trajectories to get home.

The Making Of A Hero

Johnson earned her success and her place in the previously all-male Spacecraft Controls Branch through a combination of hard, meticulous work and remarkable skill, especially at a type of math called analytic geometry, which focuses on describing shapes using numbers and equations.

When she joined NASA’s predecessor, the National Advisory Committee for Aeronautics (NACA), in 1953, she became part of a “computing pool” of mathematicians under the leadership of Dorothy Vaughan, working on aerodynamic calculations. At the time, Langley was segregated by both race and gender, and it remained that way until 1958, when NACA became NASA. But when the flight research team asked to borrow Johnson for a project, her skill and the quality of her work soon made it a permanent assignment, despite the barriers of segregation and sexism.

By the time she retired in 1986, Johnson – who had to fight to get credit for her work on a report – had coauthored 26 scientific papers. Her career at NASA spanned the first crewed spaceflight, the Moon landings, and the beginning of the Space Shuttle program. Johnson died on February 24, 2020 at the age of 101.

This Acer Nitro Gaming Laptop Is On Sale...