Home Business Keep An Eye On K’Andre Miller, Who May Impact Rangers’ Defense Next Year
Business

Keep An Eye On K’Andre Miller, Who May Impact Rangers’ Defense Next Year 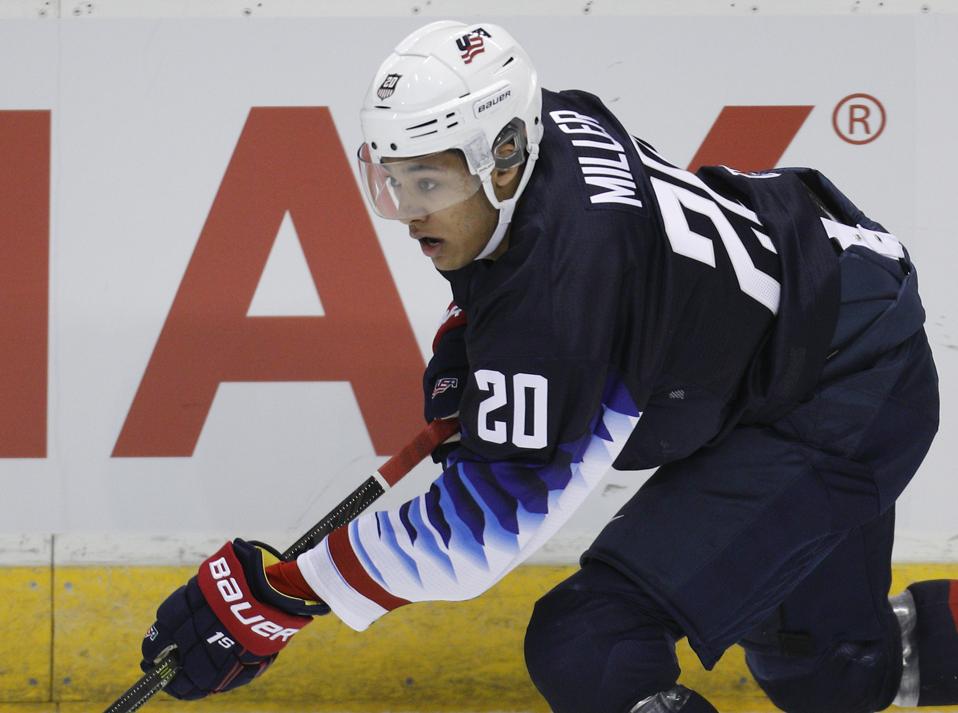 In a matchup filled with missed opportunities, K’Andre Miller’s late-game mistake proved too costly for Team USA to overcome.

Moments after the Americans scored the game-tying goal, with just over three minutes remaining in the contest, Miller turned the puck over while attempting a saucer pass to a teammate in Team USA’s zone. Canada forward Alexis Lafreniere, the likely first overall pick in the upcoming NHL Draft, deflected the pass, secured the puck and slipped it past the goalie for the go-ahead score in Canada’s 6-4 victory Thursday.

For Team USA, dropping a close game to a bitter rival was tough. But one loss in the group stage won’t set them back too far. For Miller, he has to be better. His pro club is watching closely.

The New York Rangers need to improve their defensive unit and of the Blueshirts’ five prospects representing their countries at the 2020 World Junior Championships — Miller and Zachary Jones for Team USA, Nils Lundkvist and Karl Henriksson for Sweden and Nico Gross for Switzerland — four are defensemen. Miller could be a difference-maker at the NHL level as early as next season.

An impressive showing at World Juniors, against the top under-20 talent in the World, could completely alter how the Rangers approach their organizational strategy this offseason. If Miller performs well, New York might focus on upgrading its forward group and overall depth knowing defensive help is already on the way. But right now, the Rangers need to use the tournament to evaluate if their 19-year-old prospect is far enough along to improve their defensive play in 2020.

And while Miller represents one possible solution, his road to becoming a top defenseman prospect in the Rangers organization has been unconventional. When New York selected him 22nd overall in the 2018 NHL Draft, he was still relatively new to the position. He first became a defenseman to fill a team need in high school and at 6 feet 4 inches with smooth skating ability, the transition to the blue line was a natural fit.

A successful career at the United States National Team Development Program propelled Miller into the first round of the draft. It also landed him an apprenticeship at the school ESPN’s Chris Peters dubbed “Defenseman U” – the University of Wisconsin-Madison. Over the years, the Badgers have produced an incredibly talented crop of defensive alumni that include Chris Chelios, Ryan Suter and Ryan McDonagh.

Last year as a freshman, Miller established himself as one of the better blueliners in the Big Ten and earned a place on the All-Big Ten Freshman Team. Before this season, The Athletic’s Corey Pronman ranked Miller as New York’s fifth-best prospect (also listing the Rangers as the No. 1 farm system) citing his “reach, skating and physicality make him projectable as a great pro defender who will match up against good forwards.” His offensive future remains unclear, but Miller projects as a dependable defensive zone presence. And offense isn’t the problem for the Rangers’ defensemen right now.

According to NHL.com, the Rangers have allowed 34.6 shots per game, the second-most in the league. They also possess the NHL’s tenth-worst penalty kill (78.1 percent). 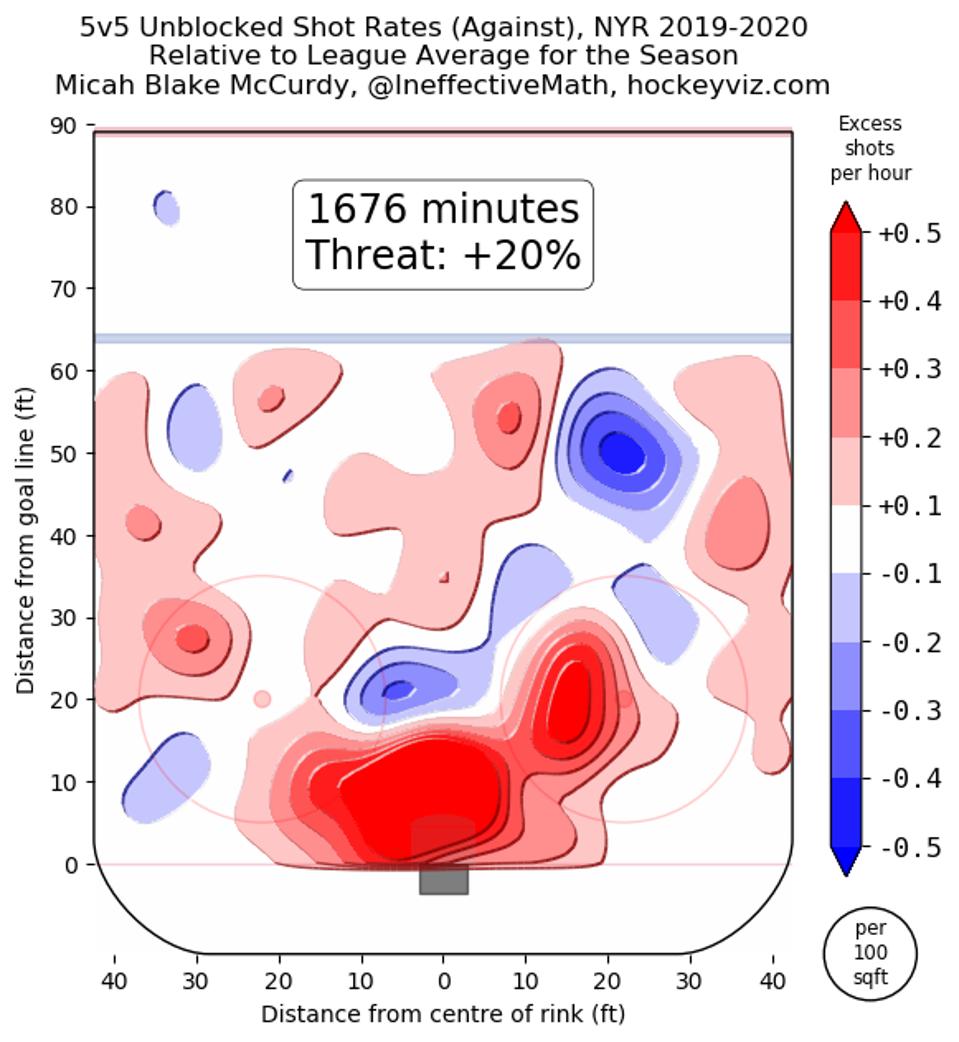 5v5 Unblocked Shot Rates (Against), NYR 2019-2020 Relative to League Average for the Season

Advanced stats don’t favor this group as well. The Rangers are last in the league in both Corsi (44.4 percent) and Fenwick (45.0 percent), according to Hockey-Reference.com, displaying how out-chanced the club is getting at even-strength. Examining the club’s five-on-five heat map from HockeyViz.com shows New York is giving up more than the league average of unblocked shots from basically all over the zone and operates with a 20 percent higher threat of relinquishing a score.

With an average age of 24.8, the Rangers are young at the defensemen’s position. They’re going to get better with time alone. But fast-tracking their improvement by seeking an upgrade outside the organization puts them in a precarious position.

According to Spotrac.com, New York has the fourth-most money invested in defensemen for the 2019-20 season and the fifth-most on the books for next. They are set to have almost $21 million in cap space this offseason and could use it on an expensive game-changer such as Alex Pietrangelo or Tyson Barrie. However, Chris Kreider and Jesper Fast have expiring contracts and Ryan Strome, Brendan Lemieux, Tony DeAngelo and Alexandar Georgiev are all due for raises in restricted free agency. Returning all of these pieces means sacrificing the opportunity to sign a marquee player.

Miller’s potential arrival in 2020 offers a cheap, quality alternative. His entry-level contract will barely impact the cap and if Wisconsin head coach Tony Granato’s opinion is any indication, Miller is “close to being an NHL player.” Adding his physical presence and defensive zone prowess could transform the Rangers’ unit as a whole. New York also has the benefit of other strong defensive prospects in their pipeline – Jones, Lundkvist, Matthew Robertson and Joey Keane – but Miller is the closest to making an impact.

Through the duration of the tournament, Miller has to keep improving and display the positive influence he can have on a game. The talent-level at World Juniors is elite and as a top-pairing defenseman, the experience of matching up against the World’s best under-20 forwards is invaluable.

Friday’s 6-3 win against Germany was a step in the right direction. Team USA strengthened its chance to compete in the medal round, Miller posted a responsible defensive game and the Rangers watched their top prospect inch closer to contributing at the NHL level.

5 Isolation Must-Reads To Help Focus On A...