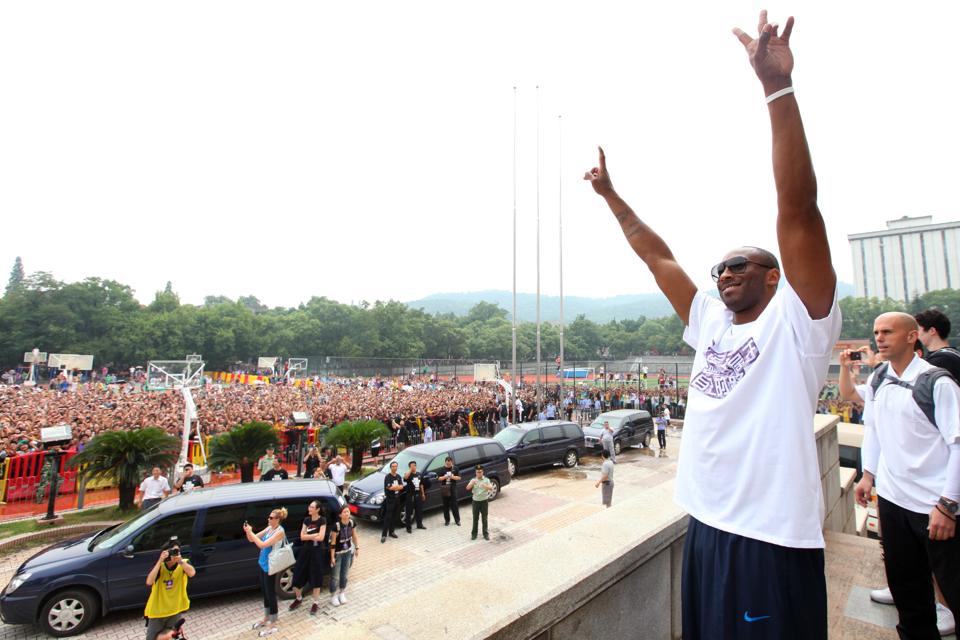 Pictured here at a NIKE promotional event at Hunan University on July 16, 2011 in China, this image … [+] reflects the emotional connection Kobe Bryant made with the Chinese population during and after his career. These efforts not only bolstered his own brand among Chinese fans, but helped pave a path for other American-born NBA stars seeking to stretch the reach of their global brands.

Kobe Bryant’s multiple impacts upon the worlds of basketball, sports, entertainment, fashion, and culture are numerous and global. Which explains why so many people are so deeply stunned and saddened with the news of his untimely passing on Sunday morning in suburban Los Angeles.

But on this solemn evening as we all reflect on his life and accomplishments both on and off the basketball court, my thoughts specifically turned to Kobe’s lasting impact on the propensity and success of NBA stars expanding their global brands into the extremely lucrative Chinese marketplace.

Many of today’s NBA superstars (LeBron James, Steph Curry, James Harden just to name three) are revered as demigods by many Chinese basketball fans…even after the relationship between the NBA and China was strained in October 2019.

In large part, LeBron, Steph, and Harden (and numerous others to be listed below) have David Stern, Yao Ming, and Kobe Bryant to thank for this.

David Stern, the transformative and visionary former NBA commissioner who just recently passed, re-initiated the relationship between the NBA and China in the late 1980s by meeting with China’s state run television network CCTV to get games on air. By 1994, all the NBA finals were shown live in China.

However, Chinese interests in the NBA increased exponentially in 2002 when Chinese star, Yao Ming, was drafted by the Houston Rockets with the first pick of the 2002 NBA Draft.

This is where timing plays a key role in why Kobe Bryant (and not Michael Jordan) became the most popular American NBA star in China after Yao’s arrival (which elevated the awareness and interest of the NBA in China). 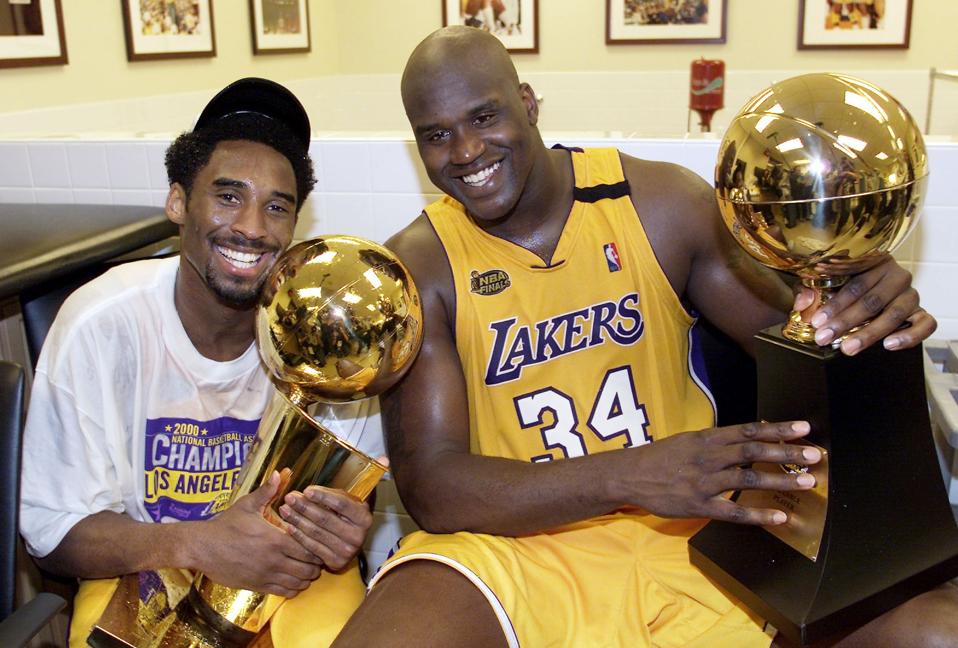 Pictured here from June 2000 is Kobe Bryant and Shaquille O’Neal after winning their first NBA title … [+] together with the Los Angeles Lakers versus the Indiana Pacers. This would be the first of 3 consecutive titles with the Lakers. Bryant would go on to win 5 titles in all during his NBA career (Getty images). 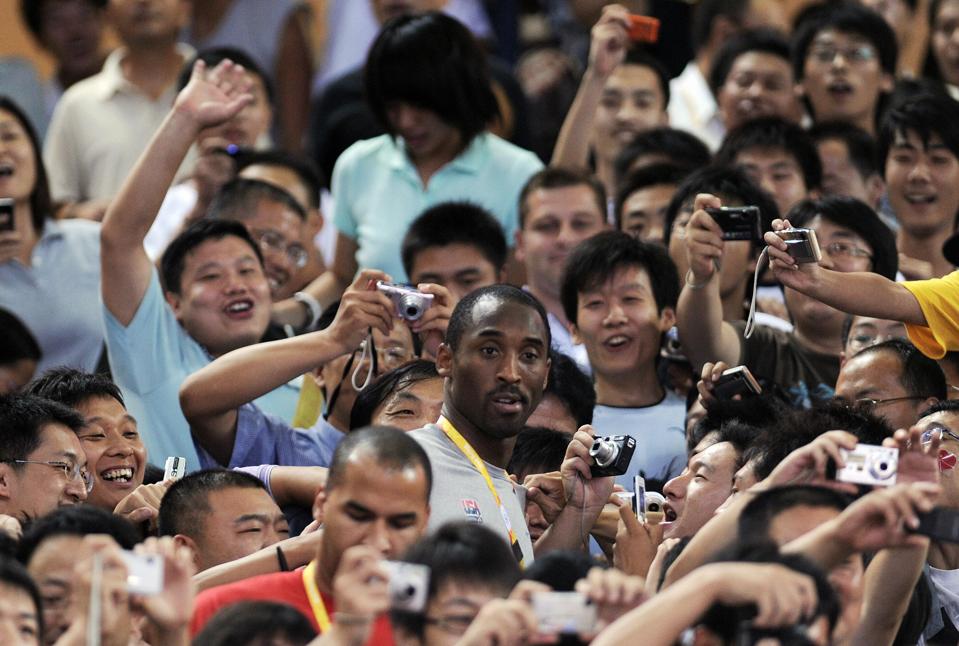 From August 2008 at the Summer Olympics in Beijing, Kobe Bryant works his way through a crowd of … [+] adoring Chinese supporters to watch the USA Women’s basketball team play a match (AFP via Getty Images).

It is true that David Stern had the vision to re-engage with China. He was a brilliant businessman, and he saw the opportunity for expansion and growth.

And it is true that Yao Ming’s stardom was absolutely critical to getting Chinese fans to really engage with the NBA. Had Yao been a seldom-used bench player, the Chinese interest in basketball would not have grown as quickly as it did. Quite to the contrary, Yao had a Hall of Fame career…which helped to fuel Chinese interests in the NBA.

But Kobe Bryant had the good sense to leverage and activate his brand in China on a magnitude that far exceeded any American-born player before him.

For that, he was truly a pioneer.

Thanks to both (1) good timing (his ascendance aligned with Yao’s arrival and the proliferation of social media platforms) and (2) the intelligence/foresight to strategically bond with a massive and adoring new fan base, Kobe Bryant was really the first American NBA star to truly leverage his stardom to build strong connective relationships with Chinese basketball fans.

YouTube videos here, here, and here lend only partial visual evidence of the fact that Bryant was absolutely worshiped by the Chinese fans. A testament to his concerted and cunning efforts to market both his personal brand and the sport of basketball to an entire nation…by simply connecting with people on a personal level.

A strategy that cemented Bryant as the most popular global athlete in China…even after his career ended.

As history will remember, Bryant’s actions in China not only enhanced/enriched his own brand, but also enriched:

Other current NBA stars who have enriched themselves with lucrative endorsements with Chinese companies (especially in the footwear market), include:

As Mike Lupica wrote on Sunday, Kobe Bryant leaves behind a complicated legacy.

But what is not complicated to understand is the legacy Kobe Bryant leaves as a pioneer among American-born NBA players in skillfully building his brand in China.

His vision, intelligence, and willingness to engage the people of China was a great lesson in how those who invest their time into fan engagement will produce the most loyal of followings.

Those Chinese loyalties to Kobe paid major dividends for him personally and the NBA’s growing popularity in China over his career and beyond (the last few months not withstanding).

And the initiatives Kobe took to build relationships with Chinese basketball fans paid major dividends to the next generation of NBA stars (13 alone mentioned in this article above) who have followed in Kobe’s footsteps to shrewdly maximize the return to their own personal brands in China.

How To Watch Or Stream UFC Fight Night...

Patriots Set To Take On ‘A Little Bit...