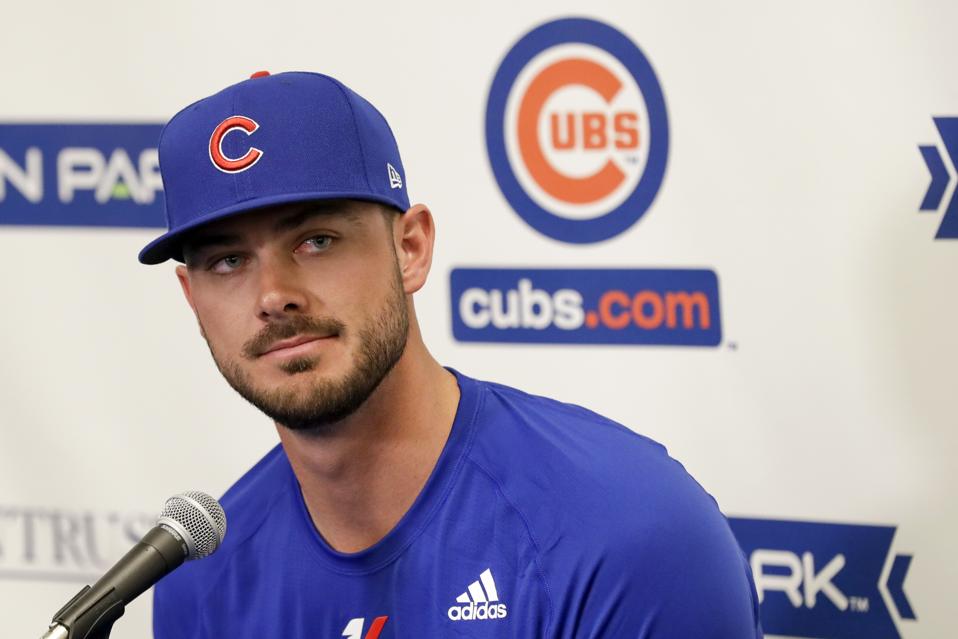 Kris Bryant arrived at spring training on Saturday, having spent his off-season as by far the most discussed player on the Cubs roster.

The All-Star third baseman and former National League MVP remained at the center of trade talks for the past three months while also awaiting word on how his service time grievance he filed against the Cubs following his rookie year would play out. Now, just weeks after an arbitrator ruled in the Cubs favor, which keeps Bryant under club control for the next two years, Bryant is prepared to settle in and prepare for the upcoming season.

He does so at a time when the 28-year-old’s future in Chicago remains mired in uncertainty as Bryant’s name remains part of possible trade talks with teams like the Phillies, Nationals, Rangers and Rockies and will likely continue to stay there for the foreseeable future. But for now, Bryant – who hadn’t discussed the offseason until Saturday – will go about his business, ready to put the past few months – and the speculation about where he will be playing baseball – behind him.

While reports indicated that Bryant is disgruntled and didn’t want to remain in Chicago after losing the grievance, he said just the opposite is true and that he wishes to remain with the Cubs as long as they want him around.

“There’s definitely no hard feelings, so let’s definitely put that narrative (about his lack of happiness) to bed,” Bryant told reporters on Saturday. “The only people whose opinion matters here is mine. And I’m right here in front of the microphone telling (reporters) that there (are) no hard feelings whatsoever.”

Much of the off-season chatter came via social media, which Bryant completely distanced himself from, calling Twitter “the worst thing that has ever happened to this world.” So rather than dealing in hypotheticals and hearsay about his desire to remain with the Cubs– a lot of which came after Bryant was reported to turn down an extension rumored to be worth north of $200 million. But like much of what others to be all part of his baseball business, Bryant said there was little truth about what has been said about him.

“I’m like, ‘Well, where was that? I never saw that,” Bryant said during his meeting with reporters on Saturday, which lasted more than 30 minutes. “It’s just these rumors and sources and people saying things. The only thing that matters is what comes out of my mouth and never once I have said I never wanted to plat here. We have it so good here. Of course, I’d love to play here.”

How Bryant factors into a Cubs future that will likely include more money down the road for players like Anthony Rizzo and Javier Baez remains uncertain. With the Cubs holding control of Bryant until after the 2021 season, they have much more say about what his trade value will be and what is reasonable to expect in return if they were to deal him.

The Cubs paid over $7 million in penalties for exceeding baseball’s $206 million luxury tax last season and remained quiet in the offseason with the exception of a couple of minor roster moves. As owner Tom Ricketts moves ahead and plans to continue to remain under the luxury tax line, the financial futures of players like Bryant remain murky.

But as Bryant prepares for a season that has its own questions mark as the Cubs transition to being led by new manager David Ross, the versatile Bryant will continue to focus on only those things within his control. It is likely that if the Cubs don’t deal Bryant before Opening Day, he could be a target for a mid-season acquisition as teams look to add a significant piece heading into the stretch run.

Bryant said he won’t allow further what-ifs to impact him day-to-day, knowing that ultimately, the matter is out of his hands.

“Like I’ve always said since the very beginning, I’m always open to (an extension),” Bryant said Saturday. “I’m always here to talk. It’s fun to talk about things like that because it’s a city I love so much, people I love so much – fans, teammates, everybody here that I’m so comfortable with.

“It’s like, of course you want to be here but I don’t hold those cards. I just play third base and left field and right field and center field and first base and do what I do.”

Under 5 Hours: British Airways Boeing 747 Sets The Record For The Quickest Flight Between New York And London