Breaking
NBA-Backed Saliva Coronavirus Test Gets Emergency FDA Authorization
The Amazing High-Yield REIT Strategy For 7.9% Dividends,...
How To Attract Candidates To Hard-To-Fill Positions
Trump: I’m ‘Ready’ To Take Action On Stimulus...
Apple iOS 13.6.1 Release: Should You Upgrade?
Non-PPP Loan Approvals Continue Slow But Steady Rebound
Here’s How To Stay One Step Ahead Of...
Microsoft Outlook Will Store Contacts’ Blood Group And...
How The US Department Of Health & Human...
Why Do Chinese Companies List Their Shares In...
Can You Get Covid-19 Coronavirus From Food? Frozen...
Winklevoss Twins Tell Bar Stool’s Dave Portnoy To...
How Democrats And Republicans Would Tackle The Enduring...
Berkshire Hathaway Doubles Down On Net Lease REIT,...
70% Of Americans: Ban Foreign Apps
This Week In Credit Card News: Pandemic Brings...
Home Business LA Rams Drop Curtain On Coliseum Stay After A Season That Didn’t Help Sell Tickets for 2020
Business 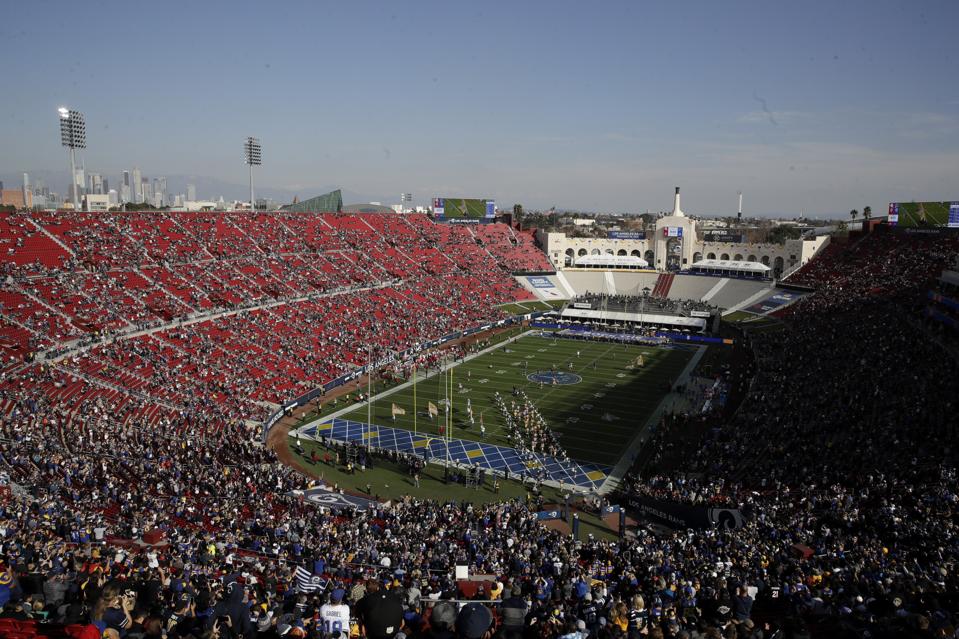 The Los Angeles Rams played the Arizona Cardinals in their final game at the historic L.A. Memorial … [+] Coliseum on Sunday. After a so-so season, the Rams’ sales pitch for tickets in the new SoFi Stadium might have grown tougher. (AP Photo/Marcio Jose Sanchez)

It was a day of thanks and thinking ahead for the Rams as the curtain fell on their stay at the iconic Los Angeles Memorial Coliseum.

That they capped the day with a 31-24 win over the Arizona Cardinals put a cherry on this special Sunday.

It was a unique afternoon for the Rams (9-7) as they concluded a season which began with wonderment and ended in “what-if.” Fresh from the Super Bowl, the 2019 Rams thought they would continue their run of playoff football.

But those aspirations vanished during an uneven season, the last of which would have L.A.’s first NFL team bidding adieu to its second home in franchise history.

The squad which set up shop in the Coliseum in 1946 after winning the NFL title in its last year in Cleveland is moving into SoFi Stadium, its $5 billion palace in nearby Inglewood.

The Chargers will also share those splashy digs, but their farewell to Dignity Health Sports Park on Dec. 22 didn’t carry the same punch as the Rams leaving their corner of Exposition Park.

They also won another NFL crown in 1951, claimed seven straight NFC West titles and produced a Super Bowl team in 1979.

Some Rams fans never got over the team’s move from the Coliseum to Anaheim Stadium in 1980. Their pique was raised when the squad relocated to St. Louis after the 1994 season.

But it’s all about next season for the Rams, their fifth in LA since their return, and the challenging offseason which awaits.

The team’s marketing department is working the phones, reaching out via social media and beating the drum in any manner possible to sell seats in L.A.’s new sports playpen.

The Rams are upbeat about how many suites and personal-season licenses they have sold, although actual figure weren’t available.

That drive to fill SoFi Stadium was to be goosed by the Rams’ encore 2019 season which was to show that the previous Super Bowl season was no fluke.

Unfortunately the Rams produced more funk than finesse, more missteps than milestone events. After winning consecutive NFC West titles, the Rams didn’t make the playoffs in one of the most significant seasons ever for the organization.

The Rams weren’t shy about tipping their hand, shoving this chips toward the table’s middle for 2019. One year after giving running back Todd Gurley a contract with a $45 million guarantee, they awarded quarterback Jared Goff a deal with a $110 million guarantee on the eve of the season.

While pushing it to the edge regarding their salary cap situation, they also mortgaged the future while surrendering two first-round picks to the Jacksonville Jaguars for All-Pro safety Jalen Ramsey via an in-season trade.

The Rams’ plan to be aggressive by retaining talent, and also compromising their ability to draft future impact players by peddling high picks, was done with a clear vision for 2020.

By taking risks through their players’ compensation and player acquisition, the Rams hoped for another playoff season to build momentum to bolster their offseason sales pitch for SoFi Stadium.

Instead the Rams fell short and they’ve seen the Chargers sell them short. The tenants in the new building are offering season-seat licenses at a fraction of the Rams’ prices.

The lowest seat license for the Chargers is $100, which allows one to buy a game ticket for $50.

The Chargers are struggling to move inventory, at any price. They were expected to contribute $400 million in seat-license funds for construction costs, but reports are that they’ve generated a quarter of that.

The Rams have reportedly sold about 40,000 season seats, which would fill about half of SoFi Stadium. It was the selling of the venue’s other half of capacity which was going to be job No. 1 until August.

The catch is that the Rams’ pitch got tougher with them struggling in their final campaign off of Figueroa Avenue.

Four years and many scores ago, the Rams reintroduced themselves to L.A. in a celebrated venue which has few peers.

“It was cool,’’ Gurley said. “Legendary Coliseum – a lot of games there. Olympics, ‘SC’ (and) all of the tradition. It was definitely, definitely cool. Excited about the new stadium, but just appreciate all the tradition that just went through the Coliseum.’’