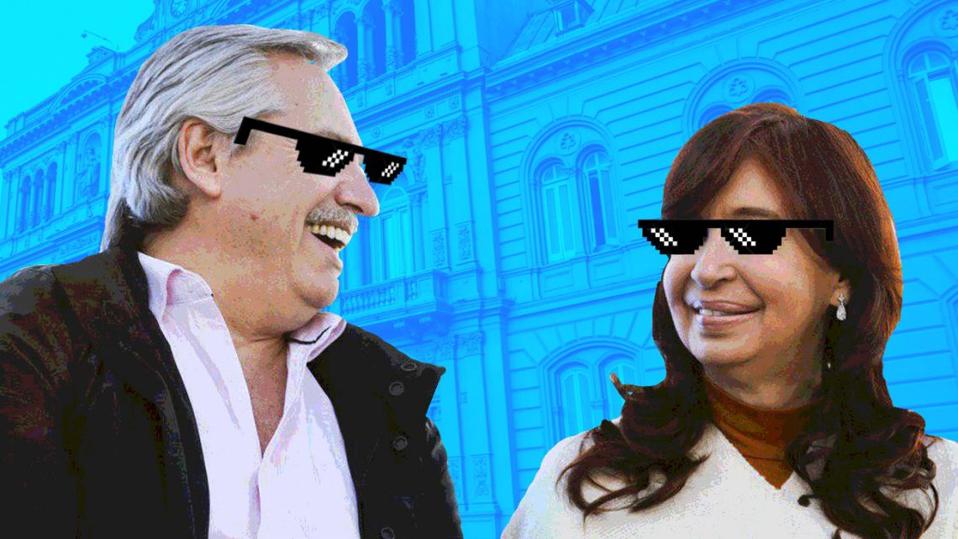 Alberto Fernandez and Cristina Kirchner are relying on “lawfare” to coerce the courts and the media.

Argentina is all about pushing the boundaries of legality, be it the way people drive, how we play football, or how a former president faces a public trial for alleged corruption. While Mauricio Macri, in his last few hours in office, tried to paint his legacy as one which has consolidated respect for institutions, particularly the Judiciary, it is evident that the ex- president did little to curb our culture of deviance — and that, despite what he says, he actually used it in his favor. Yet, what’s more troubling is the stance being taken by the now president Alberto Fernández and his VP Cristina Fernández de Kirchner. If we are to judge by past experience, Kirchnerism has clearly demonstrated its distaste for any institution that contradicts its absolute will to power and so it will be Alberto’s task to check his powerful vice-president if he is to overcome the nefarious grieta or deep polarization that has divided the nation. Unfortunately, Alberto appears cut from the same cloth.

A series of (unfortunate) events laid bare the relationship the Fernández-Fernández tandem will cultivate with dissent. The then president-elect took to Twitter the week before taking power, where he is looking increasingly like a second-hand version of Donald Trump, to lambast investigative journalist Hugo Alconada Mon, suggesting the reporter was using the shield of journalism to libel him. Alconada Mon, probably today’s most respected Argentine investigative journalist, had written a piece on a story he’s been following for quite some time, a money-laundering scheme in the city of Bahía Blanca that was allegedly used by disgraced businessman Lázaro Báez to wash his benjamins. The case has been controversial from the start, with at least two judges and several prosecutors having been appointed and dismissed, while attorneys have paraded through, picking up and dropping clients. Alconada Mon noted how Adrián Martín Rois decided to take over the defence of plaintiff Néstor Piñeiro, asking for charges against him to be dropped, which would indirectly benefit Báez. Rois is a self-proclaimed friend of Alberto Fernández and a professor in the department of Criminal Theory of the University of Buenos Aires, which the president runs (it’s not clear if he will continue to now that he’s in office). Rois’ entrance into the case will undoubtedly delay resolution well into 2020, Alconada Mon argued, due to procedural issues that, again, would indirectly benefit Báez. Is Rois improperly abusing his closeness to Fernández, peddling influence, Alconada Mon asked on Twitter?

Alberto is an irascible man. In the recent past he’s taken to Twitter to aggressively respond to critics, using foul language and misogynist comments. This time around he seemingly threatened Alconada Mon, indicating his administration would see an end to judicial and media “operators,” accusing the La Nación journalist of “operating” on behalf of “[hegemonic] media powers.” Pretty much the whole of the journalistic community immediately rejected Fernández’s threatening language, while Alconada Mon said he would not argue with Fernández. This was not the first time Alberto called a journalist out by his name to intimidate the media, and he was instrumental in putting together a system of rewards and punishments through the use of official advertising money during his time as Néstor and Cristina Kirchner’s cabinet chief. And it won’t be the last. Alberto is expected to take an active role in managing his administration’s relationship with the media. Peronism, unlike Macri’s Cambiemos (Let’s Change) coalition, places a high value on the opinion-forming press. With Clarín seemingly already aligned with Alberto, it looks like it will be a challenging time for the independent press, particularly if it were critical of the Fernández-Fernández government.

Cristina and her followers have become obsessed with the concept of ‘lawfare,’ which refers to the systematic use of the Judiciary and the media to persecute the political opponents of hegemonic elites. In Brazil it led to the impeachment of Dilma Rousseff and the imprisonment of former president Luiz Inácio Lula da Silva, while in Bolivia it formed part of the toolkit used by conspirators to mount a coup against Evo Morales, her followers suggest. In Argentina, lawfare took the form of political and judicial persecution against former members of Cristina’s government, with the former president at the center of the scene. Cristina is the victim of a conspiracy aimed at destroying her and her family, would be the argument.

The week before taking office, Mrs. Fernández de Kirchner became the first vice-president-elect to face an oral trial, the legal instance in Argentina after an “examining magistrate” had already ruled against her and an appeals court confirmed said ruling. The case, known as ‘Vialidad’ or “transport” paints Cristina as at the top of an illicit association that funnelled public works money into the hands of Lázaro Báez, who defrauded the state through rigged bids that artificially inflated prices for public works, some of which were never completed. In a separate case, known as Hotesur/Los Sauces, Cristina and children Máximo and Florencia are accused of receiving kickbacks from Lázaro and Cristobal López, laundering the money through fictitious rent contracts in the Kirchner family’s hotels and properties.

Regardless of the specific merits of the case, Cristina finally graced the tribunal with her presence, going on a three-and-a-half-hour rant that included thinly-veiled threats against the sitting judges and several other members of the federal justice system that operates out of Comodoro Py courthouse. In a violent and defiant tone, she accused the tribunal of having already decided her fate, calling it a “lawfare court” that responded to the Macri administration’s necessity of framing Néstor Kirchner as nothing more than a thief in order to impose neoliberal economic policies that have led to the return of the International Monetary Fund. “I’ve been acquitted by history, and history will condemn you,” a frantic Cristina screamed as she pointed her index finger at the judges, to the roar of her followers.

“The Judiciary that Macri used to persecute Cristina will go after him,” Fernández said about the case, revealing what their relationship will be with the federal justice. Fernández de Kirchner has already insulted the tribunal and told them she does not care about the final outcome of the trial against her, while Alberto indicated that the courts will turn against Macri and his officials. The same corrupt justice system that was subservient to the Kirchners during their glory days, and which vehemently went after Kirchnerite corruption under Macri, will most probably favor Cristina now that’s she’s assumed the Vice-Presidency. Already several judges have ruled in their favor, granting ‘K’ businessmen like Cristobal López the benefit of home arrest, while overturning several rulings in key corruption cases. Obviously, Mrs. Fernández de Kirchner won’t complain when the same judges become obedient and diligently target Macri and his ministers in the years to come.

Peronism is, in a way, a representation of Argentine-ness. At least the broadest, and one of the longest lasting, political expressions of it. The pan-Peronist Frente de Todos front coined the campaign slogan, “we will come back and we will be better,” in an attempt to indicate they had learned from past mistakes. It was meant to communicate to potential voters that moderation would prevail over extremism. Yet the signs that Alberto and Cristina will behave like pure Kirchnerites, at least in their relationship with the media, the courts, and dissent in general, are a true cause for concern.

Matt Hardy, And A Look At Potential WWE Free Agents In 2020

Transcript of Paving the Path to a Purposeful Hustle