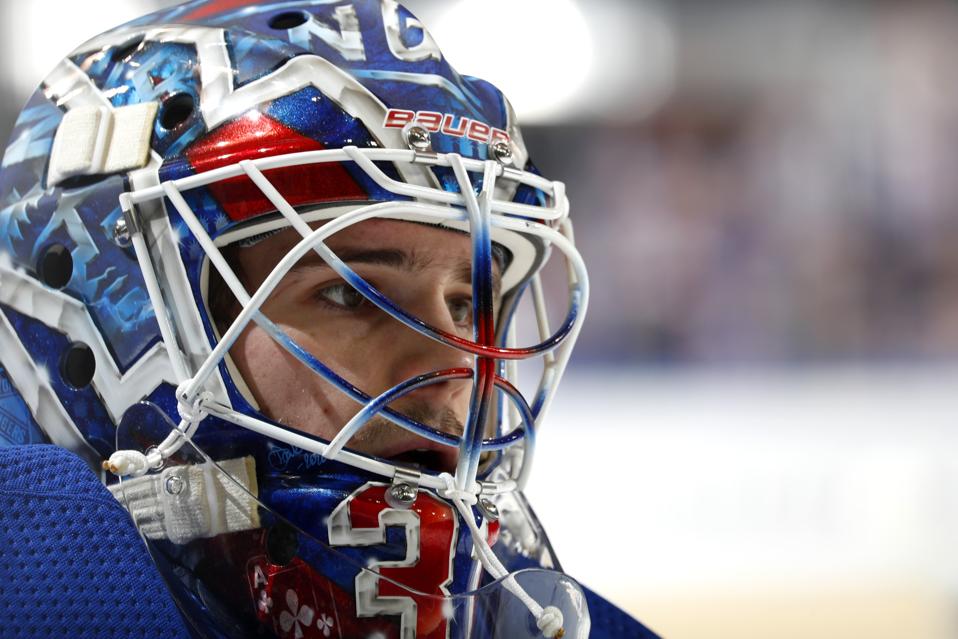 NEW YORK, NY – MARCH 07: Igor Shesterkin #31 of the New York Rangers looks on during warmups prior … [+] to the game against the New Jersey Devils at Madison Square Garden on March 7, 2020 in New York City. (Photo by Jared Silber/NHLI via Getty Images)

While the career of Henrik Lundqvist has been undoubtedly brilliant – his 459 wins rank sixth all-time – the King’s reign had to end at some point. The good thing for the Rangers, and their fans alike, is the heir apparent has already arrived. The 2019-20 season saw Lundqvist give way to the Prince – Igor Shesterkin, a potential Calder Trophy contender for 2020-21 (the NHL’s Rookie of the Year).

Since the Rangers drafted Shesterkin 118th overall in the 2014 draft, the anticipation of his arrival has only grown. The Moscow native dominated in the KHL, playing five seasons for St. Petersburg SKA and recorded a 1.11 goals-against average during his final year in Russia. When Shesterkin started his North American career in the AHL, the 24-year-old continued to excel among the competition. He recorded a 1.90 GAA and 17 wins in 25 games played, as well as a selection to the AHL All-Star Classic.

By January, it was clear Shesterkin belonged in the NHL, and he reinforced it immediately after his call up. The Russian netminder won 10 of his first 12 starts, posted a 2.52 GAA and stopped 93.2 percent of the shots he faced. It stands to reason, even in a crowded rookie class featuring Quinn Hughes and Cale Makar, if Shesterkin had reached the NHL sooner, he could have been a contender for the Calder.

The good news is Shesterkin will be eligible next season. The league’s rules stipulate a player can win the award if they haven’t played more than 25 games in the previous season nor six or more in each of the last two. They also can’t be 26 years old or older around when the season kicks off. The bad news is he maintained this status because of injuries he sustained in a car accident and the suspension, and possible cancelation, of the NHL season due to the COVID-19 pandemic.

Shesterkin projects to be an elite player – The Hockey News ranked him number one among Rangers prospects and third overall in the recent Future Watch issue. Based on his early returns, that could be as soon as next season. So, what would kind of season would it take for Shesterkin to be worthy of Calder Trophy honors?

The biggest key is the Rangers have to be a competitive team. It’s already an uphill battle for a goalie to win the Calder Trophy – the last ten recipients, and presumably, this year’s as well, were all skaters. Plus, the inclusion of wins as determinant directly ties to a club’s position in the standings. The teams of last three goalies to take home the Calder Trophy all qualified for the playoffs.

Devils goalie Mackenzie Blackwood quietly had a stellar rookie season (2.77 GAA and 22 wins in 47 GP), but New Jersey’s lack of success discounted his case. To be fair, this year’s award will likely go to Hughes or Makar regardless. Blackwood’s play was enough to earn him a third-place finish in The Athletic’s award predictions, though.

Next season should be a step forward for the Rangers. The acquisition of Artemi Panarin fast-tracked their rebuild and brought them to the fringe of the playoffs. If they can sidestep their cap difficulties, keep this group together and add talent, the pieces would be in place for Shesterkin to puck stop them to the postseason.

However, Shesterkin’s case also hinges on him stepping up his game. His 2019-20 stats established a baseline and proved he belonged at this level. But his 2.52 GAA won’t cut it in making a definitive run for the trophy. Of the last three goalies to win the award, Steve Mason, Andrew Raycroft and Evgeni Nabokov, Mason had the highest GAA at 2.29.

It’s reasonable to assume Shesterkin will cut his GAA down. He now has a taste of the league and played behind a porous defense. The Rangers were highly susceptible to relinquishing scoring opportunities to opponents, with a 15 percent higher threat than league average, according to HockeyViz.com. Whenever Adam Fox, arguably the club’s best defenseman this season, wasn’t on the ice, it rose to 22 percent. And while Shesterkin’s save percentage surpasses all three of them, he does have a small sample size and would have to maintain at least the high mark of .926 that Raycroft posted in 2003-04.

And to tie the narrative together, Shesterkin will need some sort of signature performance to generate buzz. A deep Stanley Cup run perhaps, or a streak similar to that of Elvis Merzļikins, who won eight straight games and went 175 minutes without giving up a goal through late-January and early-February.

Entering next season, Shesterkin should be the frontrunner for the award. The Hockey News released a list of the top-20 candidates for this season’s Calder Trophy in February. Shesterkin, who ranked 20th on the list, will be the only one eligible next season. He will face a talented crop. Colorado Avalanche prospect Bowen Byram, Anaheim Ducks farmhand Trevor Zegras and Alexis Lafrenière, the presumptive No. 1 overall pick in the coming draft, are three exceptionally gifted players who should make their NHL debuts in 2020-21. Russian phenom Kirill Kaprizov is expected to come overseas as well.

At the very least, Shesterkin is a known quantity. His performance in 2019-20 proves he has the potential to be an impact player at the NHL level. And if his game continues to improve, Shesterkin could add an impressive piece of hardware to his trophy case at the end of next season.

Is This Bear Market Returning To Hibernation Or Here To Stay?

‘A Beautiful Day In The Neighborhood’ Gives Nod...

Can Angel Gomes Rise To The Occasion At...