Breaking
Everything You Need To Know About EMI Option...
Social Security’s Government Pension Offset (GPO)-A Common Sense...
5 Practical Tips for Small Businesses Going Through...
Part II: How To Optimize Product Ownership In...
How Zoom Conquered Video Conferencing
How To Meet Customer Expectations This Holiday Shopping...
A Technology Solution For Muni Bond Disclosure
Five Common Ways To Fund A Small Business...
Your Floss Pick Habit Is Killing The Planet,...
Customer Service Recovery: Six Keys To Turn Complaints...
10 Unique Habits To Positively Impact Your Productivity
How Becoming A Learning Organization Is Key To...
IRS Increases Enforcement On Cryptocurrency: What This Means...
Optimus Prime Finally Gets The Diaclone Update He...
No, There Isn’t A Black Hole At The...
The Fed Could Be Repeating This Key Mistake...
Home Business Leak May Reveal Russia’s Answer To The Virginia Class Attack Submarine
Business

A Russian State-owned TV channel recently aired a segment which may give the first glimpse of a new Russian submarine design. In the corner of one scene (@ 2.48 minutes into the recording) it showed an official model of a new submarine together with previously known types. The Laika Class sub has until now been shrouded in secrecy. It is generally analogous to the Virginia Class attack submarine in service with the U.S. Navy. 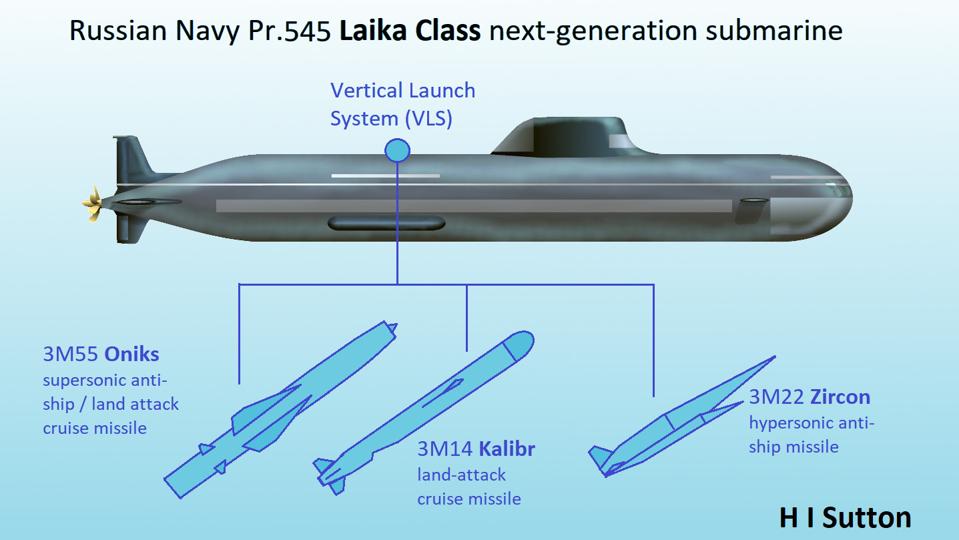 Like the U.S. Navy’s Virginia Class subs, the Laika Class will have a vertical launch system (VLS). … [+] This will carry a selection of cruise missiles able to hit both sea and land targets.

Such a ‘leak’ was probably deliberate, something that Russia has been suspected of before. On November 9 2015 Russian TV station NTV revealed the Poseidon Intercontinental Nuclear-Powered Nuclear-Armed Autonomous Torpedo to the world. Then called ‘Status-6’, it was seen over the shoulder of an officer in a partially televised meeting with President Putin.

The new sub will primarily be a hunter-killer, meaning that it is designed to counter western nuclear powered submarines. But it will also carry a range of cruise missiles, including the hypersonic Zircon.

The current backbone of the Russian Navy’s hunter-killer force is the Akula Class. These are regarded as potent adversaries. But they were designed during the Cold War and are increasingly aged relative to the latest Virginia Class. The same goes for the Royal Navy’s Astute Class. So Laika may keep the Russian Navy in the game.

Parallels to the American Virginia Class work on several levels. Laika is intended as a lower cost complement to the expensive Severodvinsk class, which is itself analogous to the U.S. Navy’s Seawolf Class. Only 3 Seawolf class boats were built before production switched to the comparatively inexpensive Virginia Class. Russia is expected to build 9 Severodvinsk class boats, but that will not be enough to replace the current generation of attack submarines. So the Laika is to Severodvinsk what Virginia is to Seawolf.

Another similarity is in a crucial technology. Like the Virginia Class it will have a conformal main sonar array instead of the older cylindrical arrays. Even the more talked about spherical arrays are looking old fashioned. Conformal arrays seen as the way forward on both sides of the Atlantic.

The quality of sonar arrays are life and death in undersea warfare, but they won’t capture the popular imagination. Again like Virginia the new sub will have a vertical launch system (VLS) for cruise missiles. These will be fitted with a wider array of weapons than the U.S. system. The planned load-out are known to include the Kalibr land attack missile which is equivalent to Tomahawk. It will also carry the larger Oniks supersonic cruise missile which can target both ships and land targets. And lastly the Zircon hypersonic anti-ship missile.

Russia will not be alone fielding another generation of human crewed attack submarines before the advent of fully autonomous hunter-killers. Information is creeping out about the U.S. Navy’s SSN(X) program and the Royal Navy’s SSN(R).

The name Laika refers to a type of hunting dog used in Siberia. Defense analysts will use the more proper project number: Pr.545.

Looking Ahead – The Challenges For Retail In A New Decade