Breaking
What You Need To Know About Your Startup...
Governor Signs Landmark Student Loan Borrower Protection Bill...
Reddit Co-Founder Alexis Ohanian Plans $150 Million Investment...
This Week In XR: Enterprise Adoption And Financing...
The Disadvantages Of Aging In Place
How Advances In Customer Service Can Take Telehealth...
5 Reasons Why Your Startup Needs To Be...
Beyond-Professional: What Is The New Workplace Normal?
After 75% Rally, Johnson Controls Stock Looks Fully...
The Future Is Now: This Start-Up Offers Carbon-Free...
Eight Boxes To Check If You Want To...
Where Have All The Entrepreneurs Gone? A Conversation...
Nintendo Just Stealth Released ‘Kirby Fighters 2’ For...
Will Christmas Come Early For Retailers This Year?
Two New Bills In Congress Offer Clarity For...
Serendipity Lost: Bringing More Pizazz Into The Virtual...
Home Business Lebanon Is Producing Excellent Mountain Wines
Business 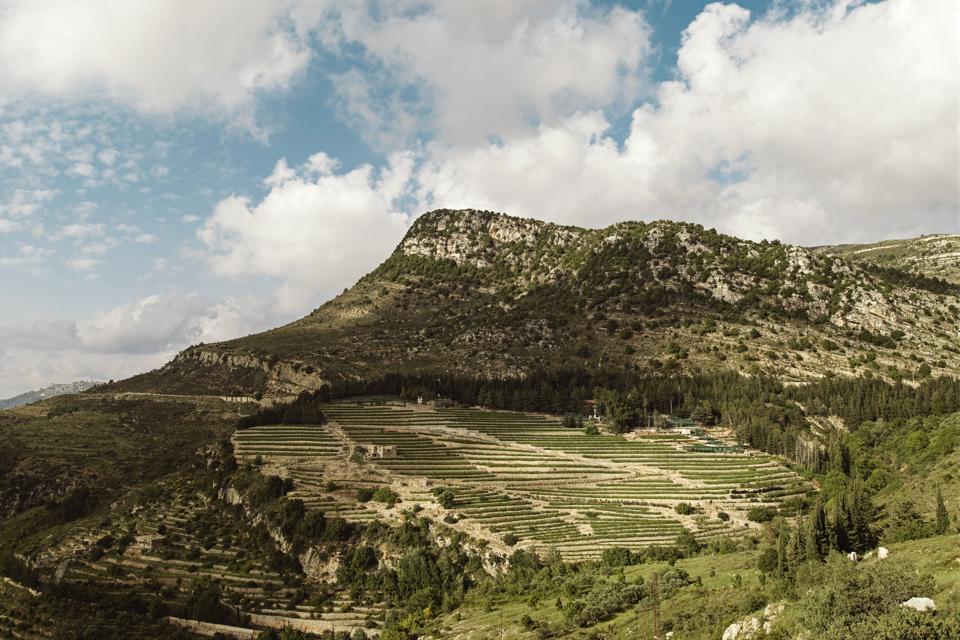 The Republic of Lebanon forms part of the eastern coastline of the Mediterranean Sea. Somewhat smaller than the U.S. state of Connecticut, or half as big as the country of Wales, the nation includes excellent terrain and climatic conditions for growing grapes and producing wine. It has some three hundred days of annual sunshine, varied soil types and climates that range from that at sea level to that at over a mile high in altitude.

Up until about 300 BCE—seafaring Phoenicians shipped wines throughout the Mediterranean regions from their coastal cities of Tyre and Sidon. And 4,500 years ago, a local poem was created to celebrate wine—as the beverage of rulers.

Over millennia, Lebanese wine production has spurted and stopped—at times halting or slowing for reasons that include religion and conflict. When the civil war that lasted from 1975 until the early 1990’s ended, 10 wineries existed in the country. Today, there are more than five times that number. Almost all are located in the Bekka Valley, where Jesuit monks began planting grapes in 1857.

A prominent exception is to this valley locale for vineyards are the vines that belong to IXSIR, a word derived from a local dialect meaning ‘elixir.’ Having produced its first vintage in 2008, IXSIR is today one of the leading Lebanese wine producers. It is focused on making mountain wines.

Etienne Debbane, co-owner of IXSIR, recently flew from Lebanon’s capital city of Beirut to Bordeaux in France. While there, we met in the city where he described how their company started, the challenges they faced and the allure of altitude vintages. 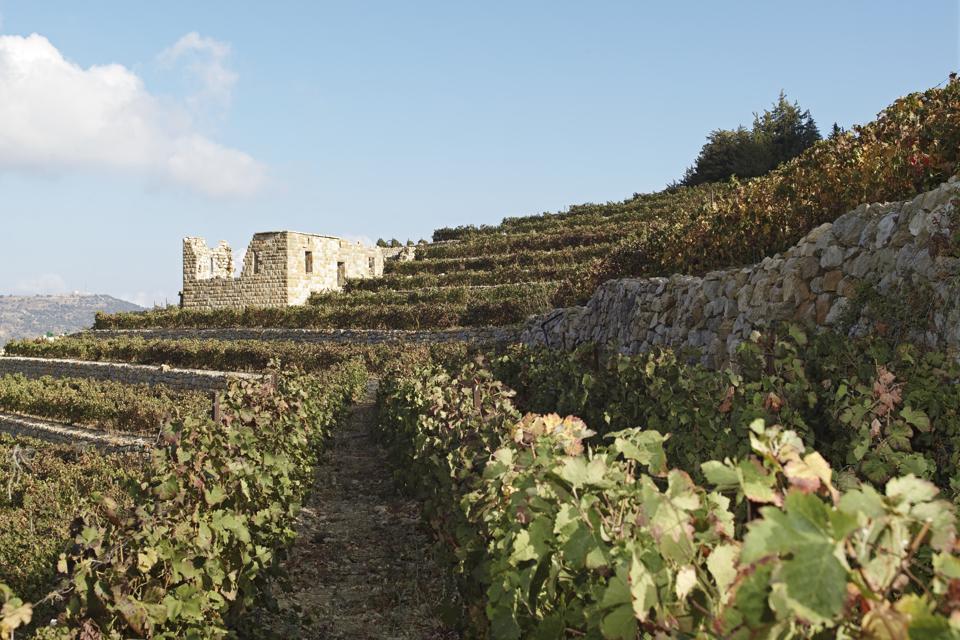 “IXSIR is an old dream of mine. I’m an agronomist and studied at Reading University in the U.K for a master degree in entomology. My first job was in French vineyards as assistant to a product manager. Every week I was going over to a vineyard in France. When you meet nice farmers, you come away with a bottle of wine, and over weekends I usually invited my friend living in Paris to try these. I thought—I like this product.

“In Lebanon, we are a family business. We grow citrus, bananas and sub-tropical plants on the coast of Lebanon. My father told me—do whatever you want to do. I got interested in wine. I was reading about wines, started collecting them. Then the war broke, and wine became hard to get, hard to keep. When Lebanon came back to a normal life in ’92, ’93, I thought—we can’t have this beautiful phase of life and not have wine on the tables. We need to do something about it. A friend thought we could create a wine import business—which we did. It’s still there in Beirut.”

Soon after, Debbane seized an opportunity to make wine in Egypt. After four years, that company was producing more than a million bottles annually, made from the must of grapes imported from Spain and Italy. Their Bordeaux based enologist at the time was Denis Dubourdieu, a consultant renowned for elevating the quality of wines he worked with. Eventually, Debbane and business associates sold that winery to a competitor.

It was time to move on.

Debbane described his next phase of business. 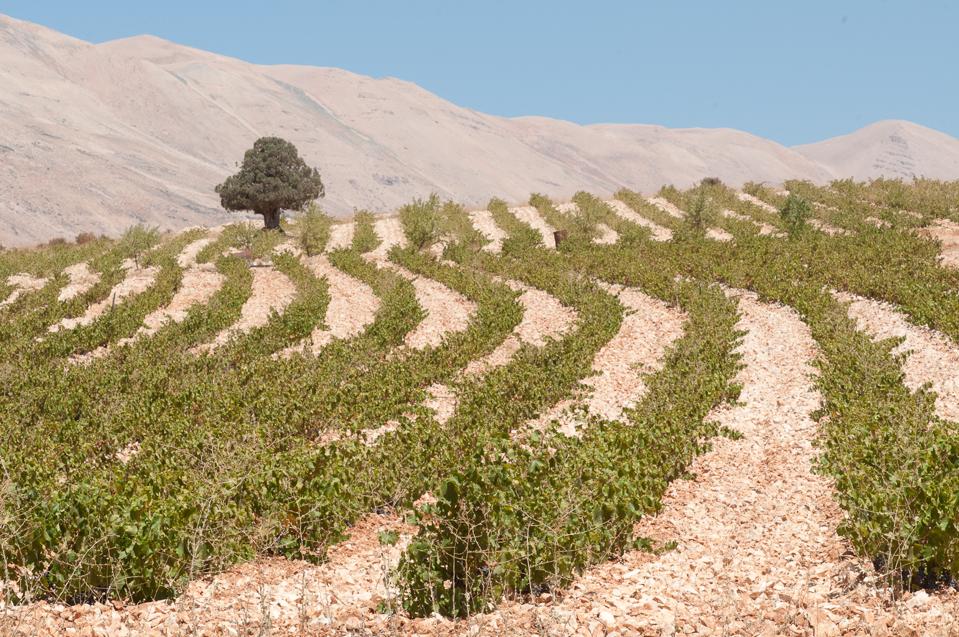 “My dream was to establish a winery in Lebanon. My friend the French winemaker Hubert de Boüard was visiting us all the time. In 1999 we started thinking. What expression of wine? What varietals could we do? We started doing the wine in our minds. In 2004 we started acquiring pieces of land, old vineyards. I did the survey of all existing vineyards in Lebanon to find where the good vines were located. Before the Turks occupied Lebanon, the mountains of Lebanon were covered in grapes. The Turks would not allow the growing of grapes because they would make alcohol. So grape planting was decimated. But still there were areas called kurum, which means vineyards. These special areas where grapes would excel were still available, and not planted. We went there and bought the land. This is how we started our first wine in 2008. We had six different vineyards in six separate locations.”

Currently, IXSIR has 297 acres (120 hectares) of vines under production, and an additional 75 acres (30 hectares) scheduled to come on line during the next three years.

Debbane learned that winemaker Gabriel Rivero—who had worked in the Médoc in Bordeaux and also at Château Kefraya in Lebanon—had moved to Ribera del Duero in Spain during the war. He visited him there and offered a position with IXSIR. Rivero accepted. 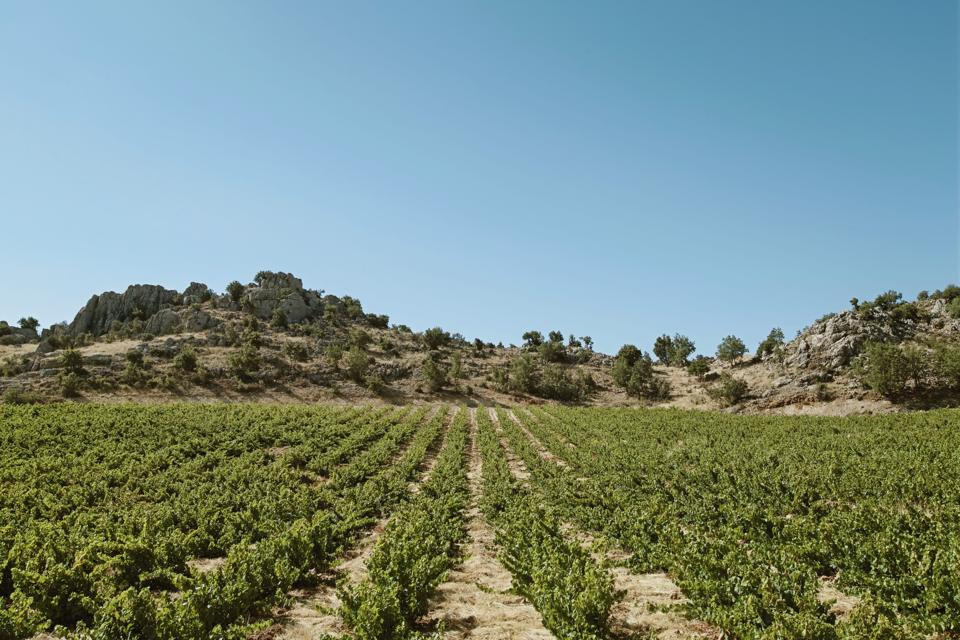 Debbane is pleased with their progress.

“In 2008 we started our first wine, and it’s been a nice ride. We were three partners. We produce currently eight wines: two rosés, three reds and three whites. Each is different. We don’t have a first wine, second wine, third wine. Each has its identity and a line of style. The star wines—white and red—are very classic and spend 24 months in oak—half new oak, half one year old. We have 2 rosés, one in the Provence style, with the classical Grenache, Cinsault, Syrah, and one with Mourvedre and Syrah which I think is very refined and elaborate. We like to say we’re the new wine of the old world.”

IXSIR now exports to 35 countries, and to 22 states within the U.S. They were focusing on selling to restaurants with Lebanese food—light, healthy Mediterranean cuisine—until the coronavirus pandemic halted that effort. They are now developing an online sales platform.

The vines of IXSIR grow on hillsides—not flatlands—within six regions located as far apart as 60 miles (100 kilometers). Viticultural challenges include snow, hot summer winds and summer temperature gradients up to 27 degrees Fahrenheit [15 degrees Celsius]. Advantages of altitude viticulture include the abundance of water from melted snowpacks that recharges local aquifers, a lack of rains during harvest and few diseases—due to dry conditions. Ample sunshine provides the growers with the luxury of choosing optimal times for harvest. Growing vines from between 1,300- and 5,900-feet (400- and 1,800-meters) elevation results in an overall harvest season lasting up to 50 days—from mid-August until early October. They use few chemicals and no irrigation. 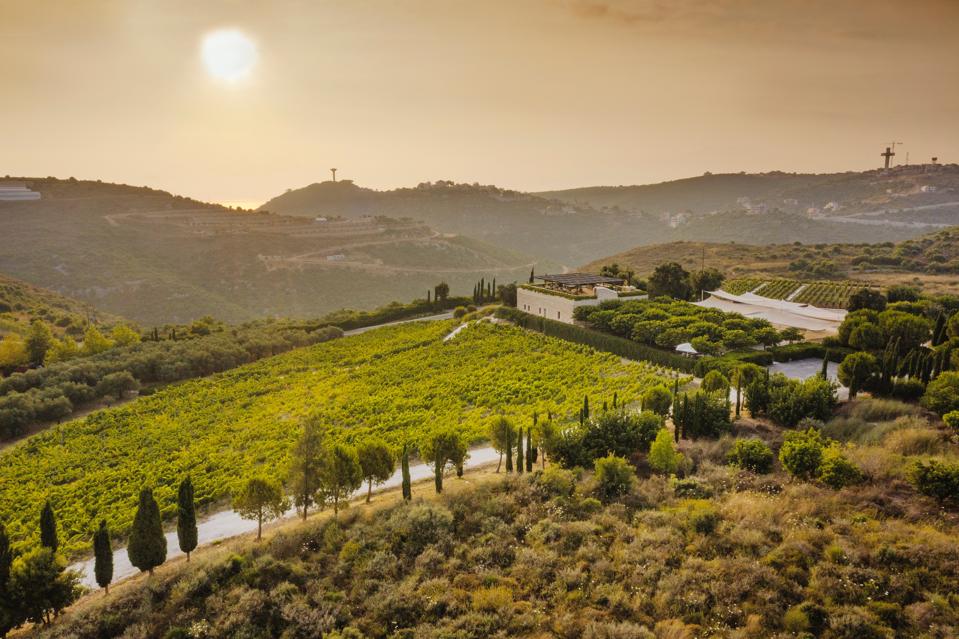 IXSIR winery in Basbina, in the Batroun region of Lebanon

Differing elevations with cooler mountain climates allow IXSIR to focus on subtleties in aromas and tastes, rather than being held ransom to higher alcohol and more blunt power associated with excessively hot climate wines. Blending from 14 different grape varieties located in six vineyards enhances that quest for expression.

“What is original is our blends, which are not common,” Debbane said.

Their Altitudes wine range includes a red blend of Cabernet Sauvignon, Syrah, Caladoc and Tempranillo, while white wine from that range is made from Muscat, Obeideh and Viognier grapes. The white from their ‘El’ range is a 70/30 blend of Viognier and Chardonnay.

“We have a history of wine—five, six thousand years—which I think helps. On one of our bottles we relate a poem that was written 4,500 years ago—saying they praise the wine of Lebanon, which is suited for kings and rulers of the world. We have good terroir. We grow Syrah in our six different vineyards; each has a different expression.

“Our first white wine is a Muscat blended with a local variety of interest called Obeideh, and some Viognier to make it round. It’s a unique wine. Very fresh, not aromatic but full of aroma. It’s easy to drink and matches Lebanese mezze food.” 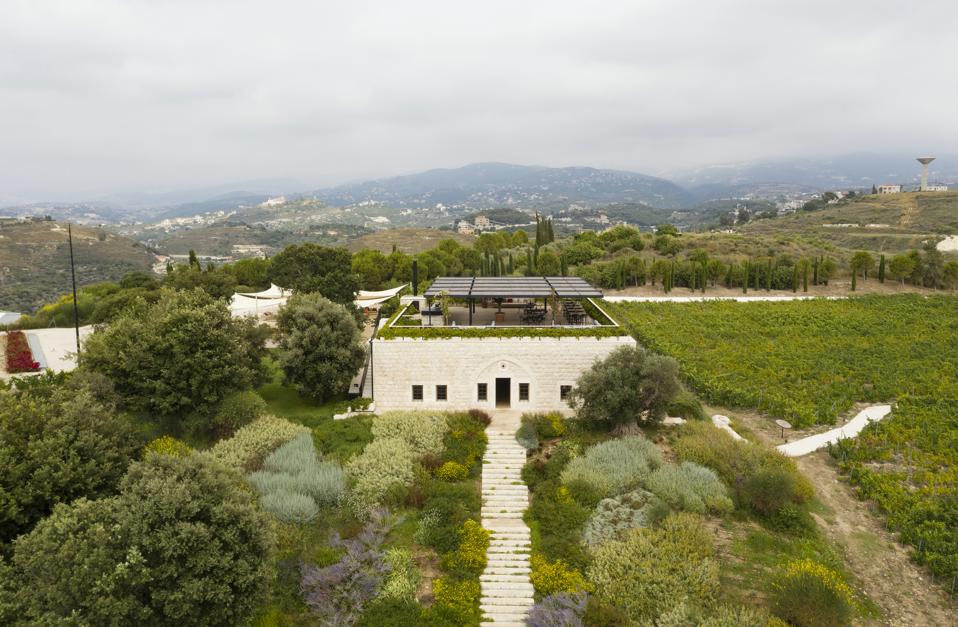 The country of Lebanon is only slightly larger than the geographical departement known as the Gironde in France (one of a total of 94 French administrative departements). The Gironde is where the Bordeaux wine growing region is located. However, whereas the highest point in the Gironde is 545 feet (166 meters) above sea level, the top vineyard elevation in Lebanon is ten times higher, and the highest overall point in the country is at over 10,000 feet (3,000 meters) elevation.

“Lebanon is a tiny country. But there is diversity. We have three climates: Subtropical Mediterranean, Alpine in the mountains, and behind the mountains—in the Bekka Valley—it is Continental. Our wine is a mosaic. We have a nice expression, and the idea behind IXSIR is we think we can express Lebanese wine differently than what is existing. Not that we’re better; it’s a new expression.”

Their winery recycles and treats liquid and solid wastes internally and produces its own energy from photovoltaic cells. It has won three international architectural awards for environmental considerations.

Debbane shared the rewards of their work as being three-fold. First, they have succeeded in growing good grapes. Second, they succeeded in finding new and attractive expressions of wine in Lebanon, partially through blending. Third, they are able to export Lebanese wines that match that country’s food—a facet appreciated internationally by those clamoring to learn more about wine and food pairing.

Together with three French winemakers, I tasted red and white wines from the El range of IXSIR wines. These were generally of exceptional quality. On a 100-point subjective scale, these score mid-90’s.

This 70/30 blend of Viognier/Chardonnay ages in French oak for 12 months, and is made from grapes growing on three plots located up to 3,940 feet (1,200 meters) elevation above sea level. It includes floral as well as tropical aromas and those of peaches, nectarines and grapefruit are predominant. It also provides a gorgeous blast of balanced acidity. The taste is coherent and balanced and includes the delicate, precise freshness of a Viognier as well as a mouthful of pleasing tropical fruits, with a hint of mandarin in the length. An excellent, fresh, focused wine. Consider pairing with goat cheese, sole meunière or lemon sorbet.

This 45/45/10 blend of Syrah/Cabernet Sauvignon/Merlot includes grapes grown at 5,900 feet (1,800 meters) elevation, and will eventually age for 24 months in French oak. It includes aromas of strawberries, cherries, sultanas and pencil lead and is initially reminiscent of a delicate Rhone blend. The taste is fruity, lively and fun, with the spunk of a Beaujolais Cru (though without Gamay) and the authority of a right bank Bordeaux; it includes tastes of black cherries and raspberries. Surprisingly easy, and pleasing, to drink for such a young wine. 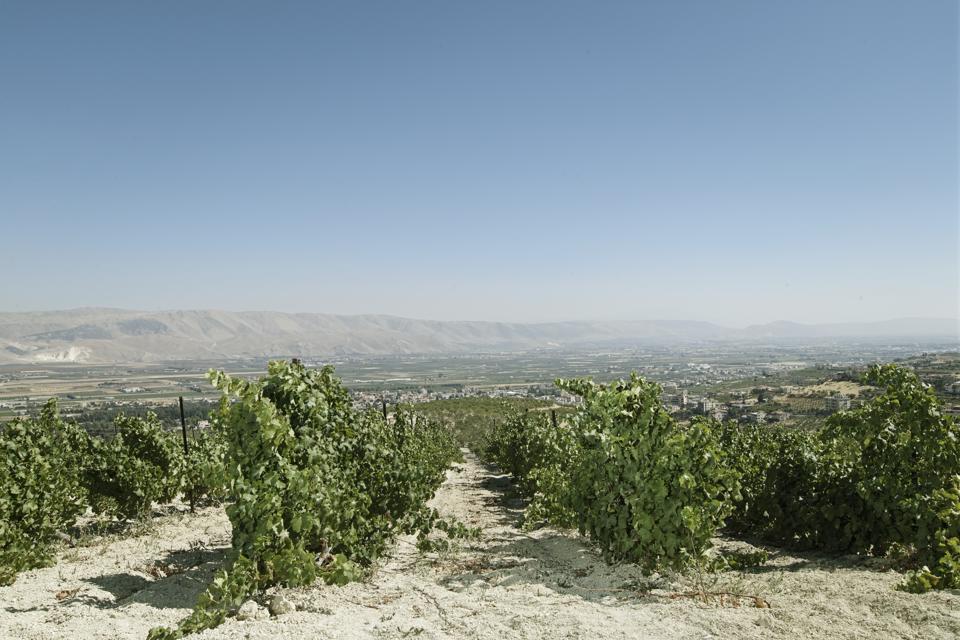 This blend of Syrah/Cabernet Sauvignon/Merlot ages for 24 months in a 50/50 range of French new and one-year old oak barrels. Initial aromas include a bucket of cherries and blackberries, as well as charcoal and chocolate biscuits—with balance, heft and authority. Both plush and mildly peppery. In the mouth, spices include cardamom and cumin, sultanas and oranges. This six-year old wine includes the structure and authority associated with a right bank Bordeaux wine, but with even greater gravitas. Consider pairing with duck a l’orange, a beef carpaccio or a bowl of strawberries.

With All Eyes On Bitcoin, Another Crypto Is Up 500% In The Last Year—And It’s Still Soaring