LeBron James Now On Board If NBA Bars Fans Over Coronavirus 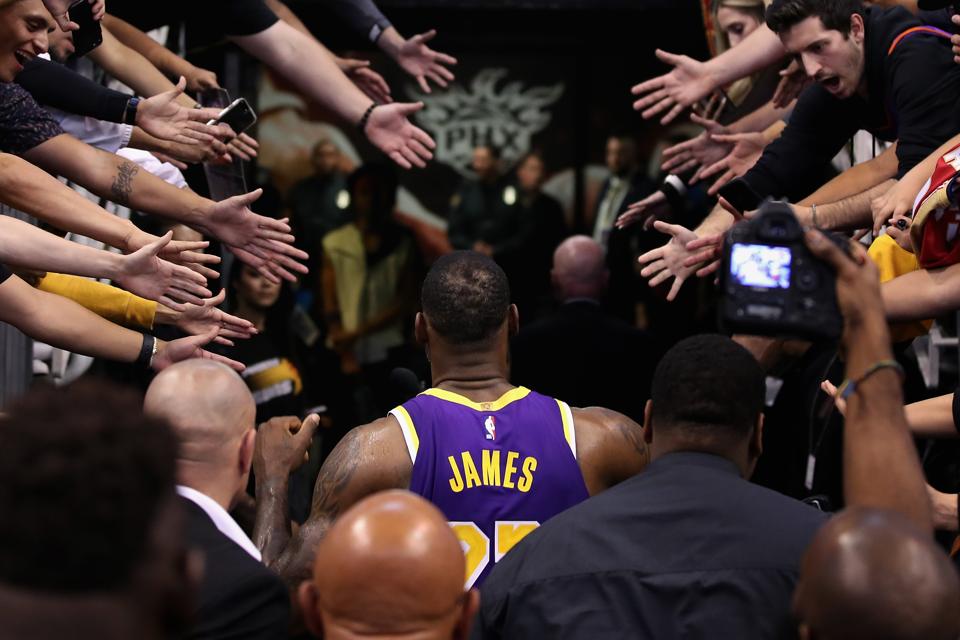 PHOENIX, ARIZONA – NOVEMBER 12: LeBron James #23 of the Los Angeles Lakers walks off the court past … [+] fans following the NBA game against the Phoenix Suns at Talking Stick Resort Arena on November 12, 2019 in Phoenix, Arizona. The Lakers defeated the Suns 123-115. NOTE TO USER: User expressly acknowledges and agrees that, by downloading and/or using this photograph, user is consenting to the terms and conditions of the Getty Images License Agreement (Photo by Christian Petersen/Getty Images)

LeBron James wants to play in front of packed arenas every night, but the Lakers star understands that may have to change as the NBA and other sports leagues continue to assess how to handle safety concerns over the coronavirus outbreak.

James stated last Friday that he would not play if the NBA prohibited fans from attending games.

Since then, however, a number of events that attract large gatherings have been cancelled around the globe. The Ivy League cancelled it’s conference tournaments Wednesday, leading many to wonder what impact the coronavirus could continue to have on the sports world. With social distancing and avoiding crowded spaces among some of the recommended safety measures in various countries and cities dealing with the virus, leagues such as the NBA could conceivably prohibit fans from attending games.

That decision has not been made yet, but if The Association does go that route, James has adjusted his stance.

“Well it’s funny, because when I was asked the question of would you play without no fans, I had no idea that there was actually a conversation going behind closed doors about the particular virus,” James told reporters Tuesday. “Obviously, I would be very disappointed not having the fans, because that is what I play for – I play for my family, I play for my fans.”

James added that while he would be “disappointed” to play without a crowd, he and the rest of the league’s players should listen to whatever the NBA deems is best for their health and safety.

James’ Lakers held a town hall with the team’s doctor regarding the coronavirus Monday; similar sessions have become popular all across sports. Tuesday was also the beginning of new pre- and post-game media policies in the NBA, NFL, MLS and MLB. The four leagues closed off locker room access to media and nonessential team employees, instead conducting interviews in press conference-like settings with 6-8 feet of distance separating reporters and speakers.

James, one of the most accessible and outspoken athletes in the world, joked that he felt “so much safer” taking questions that way before admitting that it was “very challenging to do an interview like this.”

It remains to be seen what other adjustments will be made due to the coronavirus, but more changes to the sports landscape can certainly be expected moving forward.

The Impact Of Coronavirus: Advice For Funded Small...

Wall Street Rebounds From Earlier Sell-Off, Even As...