Breaking
Bernie Sanders Warns Republicans ‘Will Win’ In 2022...
5 Tips For Virtual Networking Success
10 Ways Covid-19 Vaccine Supply Chains Need To...
Here Come The Workers: 4 Steps To Take...
First Electric Car? Consider These Four Big Upsides...
What’s Missing From Howard Marks’ “Something Of Value”
A 10 Billion-Year-Old ‘Super-Earth’ Has Been Found In...
David Einhorn Warns Of Danger From Valuation-Indifferent Investors
How Safe Is Your Stock Portfolio Over 30...
Technology Is Rapidly Changing Cancer Care
4 Major Market Changes In 2020 That Can...
Boston Globe Starting “Fresh Start” Initiative As Part...
Can Money Protect You From Covid-19? It May...
The Most Important Voice In Artificial Intelligence: Frontline...
How to Start an Online Store
Amazon’s Small Business Empowerment Team Is Helping Entrepreneurs...
Home Business Lee Sun-Kyung Follows ‘Parasite’ With Comic Role In ‘War of Prosecutors’
Business 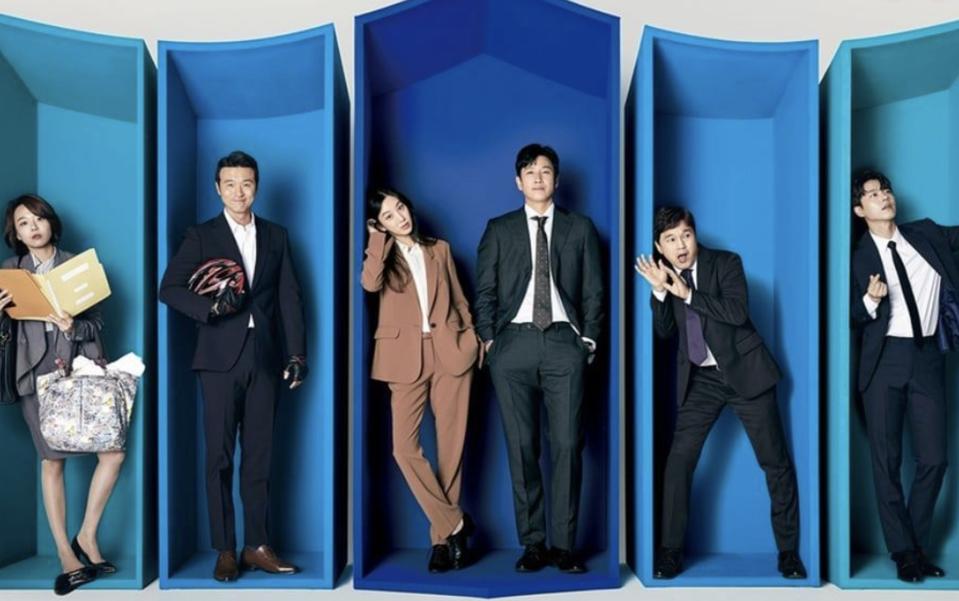 The prosecutors in ‘War of Prosecutors’ do their best while facing often overwhelming odds.

For a follow-up to his turn as the privileged head of the Park family in Bong Joon-ho’s film Parasite, Lee Sun-kyun has chosen a TV comedy about prosecutors.

In the JTBC series War Of Prosecutors aka Diary of a Prosecutor, Lee plays Lee Sun-woong, who works at the prosecutor’s office in Jinhyeong, a small city in southern Korea. The city has its share of crimes but none that gathers enough nationwide attention to place them on the map. The prosecutors are so overburdened with mountainous piles of legal paperwork, each day pretty much blends into the next and the highlight of their morning meeting is where to eat lunch. Food is one thing the prosecutors, also played by Lee Sung-jae, Kim Kwang-gyu, Lee Sang-hee and Jeon Sung-woo, have to look forward to in the relentless onslaught. They indulge so frequently and heartily during the first few episodes that the drama might as well be a mukbang, an online broadcast focused on a host happily devouring food.

The most exciting thing about the office is the possibility of a ghost haunting Room 309 but the woman who winds up working in that room turns out to be even scarier. She is the famous prosecutor Cha Myung-Joo, played by Ryeo Jung-won, who for her audacity in challenging power gets downsized to the small city’s prosecutor’s office. It quickly becomes obvious that Cha has her own way of doing things, which particularly irks Lee, who feels she is not taking the time to understand the background of some of the cases they are working on.

Complicating the situation is the fact that Lee and Cha attended the same university, which she does not acknowledge. Whether or not she remembers him as a student she rejects any current overtures of camaraderie. Some of her dislike of her former fellow student and colleague seem to relate to his wealthy background. The two prosecutors quickly find themselves at war over how to handle different cases.

The dryly humorous drama is based on novel Geomsawejeon, which was written by real-life prosecutor Kim Woong. The screenplay was written by Park Yeon-seon, who wrote the 2016 drama Hello My Twenties aka Age of Youth. It’s a reunion for Park and director Lee Tae-gon, who also worked on Hello My Twenties and its 2017 sequel. Although the series was inspired by the novel, in an interview with The Korea Times, the director said that he also interviewed real-life prosecutors to create a story that was even more dramatic.

Much of what Jinhyeong’s prosecutors deal with is pretty humdrum, vandalism over a love quarrel or petty fraud, but the prosecutors will soon be called on to handle a more dramatic case. Will Lee Sun-woong and Cha Myung-Joo call a truce or will their ongoing battle damage future cases? It’s also likely that these two dedicated prosecutors fight so passionately that they will fall in love, but first he’ll have to solve the mystery of why she dislikes him so much.