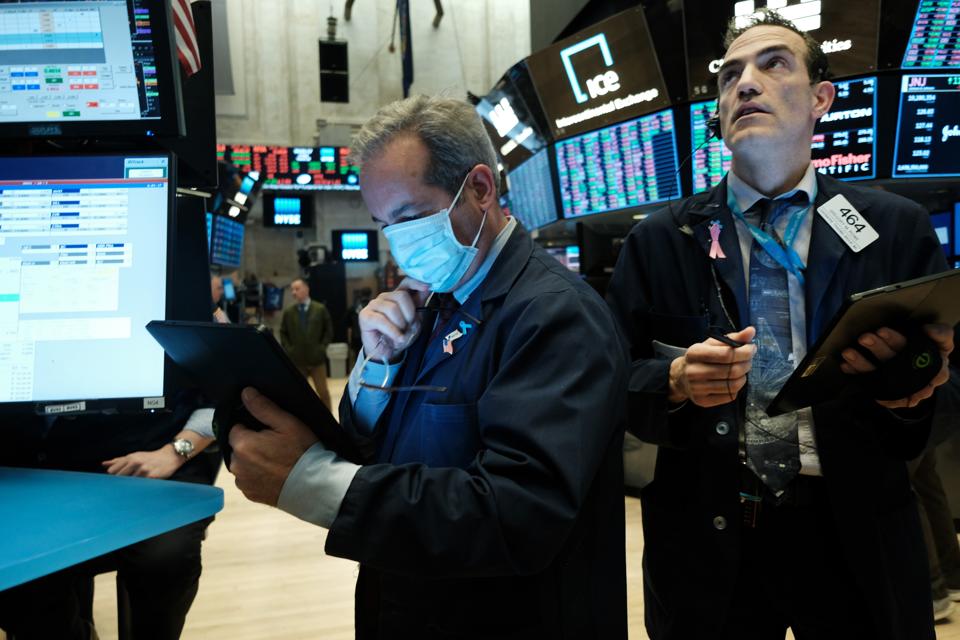 Last week’s market action saw the biggest one-day point drop in the S&P 500 on Monday, an event that did not help investor confidence in the markets. After a rally on Tuesday, the S&P 500 fell precipitously on Wednesday. The stock market tried to stabilize late in the week. However, President Trump’s Friday afternoon press conference did not generate confidence from investors or traders.

The E-Mini futures had a high of 2442 at 11:15 AM (Eastern) on Friday, but by the time Trump’s press conference started 30 minutes later, it was down to 2382. It closed the day at 2266. Some are recommending that President Trump should no longer give daily press briefings, and leave them to be conducted by medical experts.

The year-to-date (YTD) sector performance is quite surprising. Since 1945, consumer staples, health care, and utilities have done best during bear markets. So far in 2020, the Consumer Staples Sector (XLP) is already down 19.97%; by comparison it was down only 15% in the bear market year of 2008. That year the S&P was down 37%, and it is already down 28.66% so far the year. 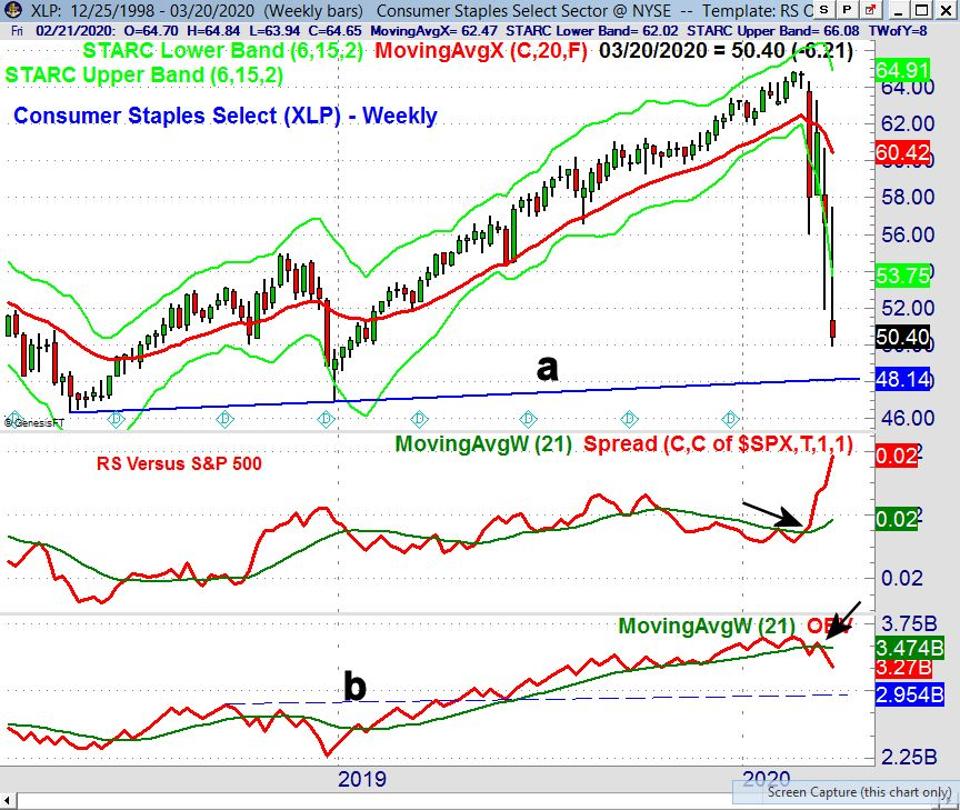 The Consumer Staples Sector (XLP) peaked on February 28 at $64.84, before closing the month at $62.72. Each of the past four weeks, XLP has traded below the weekly starc- band. Based on the starc band analysis this means that XLP is quite oversold, and should rebound or at least move sideways for a few weeks.

The relative performance (RS) measures the performance of a stock or ETF versus the S&P 500. XLP’s weekly RS has risen sharply over the past four weeks, confirming it has been leading the S&P. The on balance volume (OBV) has dropped below its flat Weighted Moving Average (WMA), but is still above the long term support (line b). 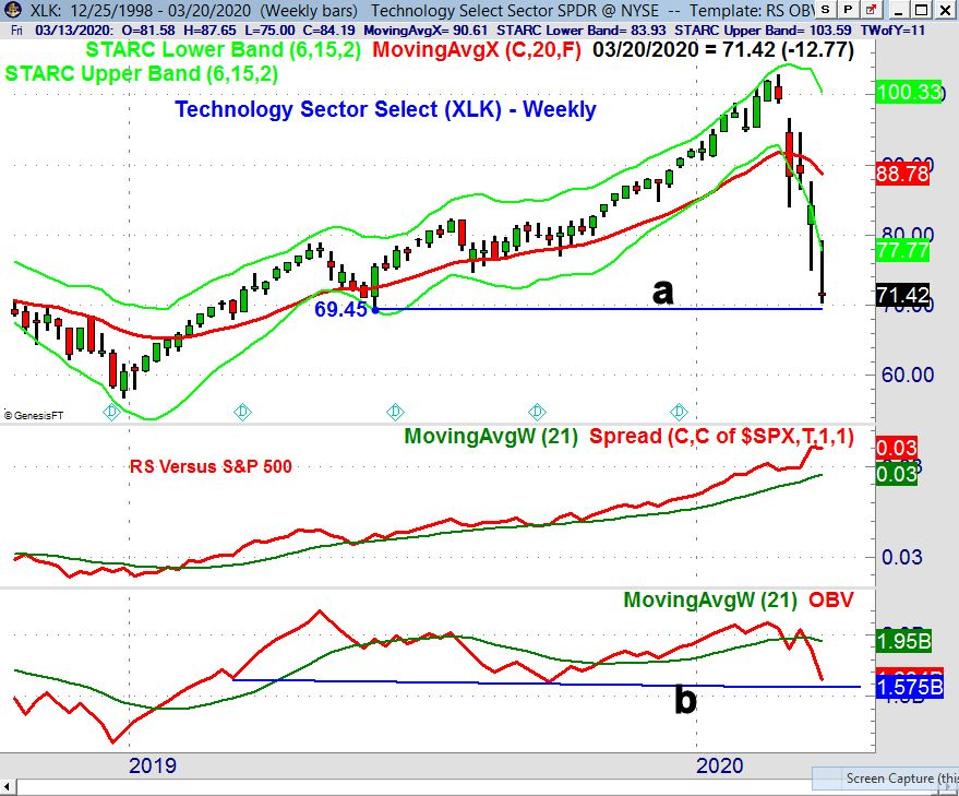 XLK’s weekly RS made another new high two weeks ago, as XLK continues to perform stronger than the S&P 500. Its weekly OBV plunged further last week, nearing long-term support (line b). The daily indicators (not shown) are mixed, as the RS is positive while the OBV is below its WMA and therefore negative. 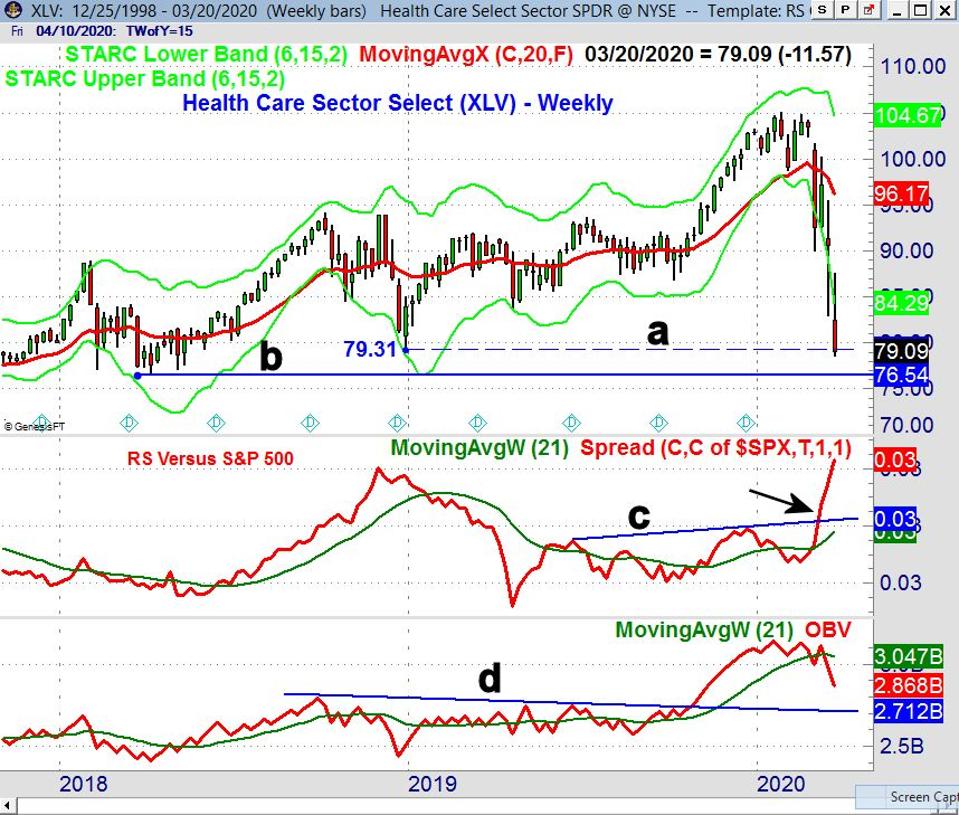 The weekly RS has continued to rise strongly, after breaking through the resistance (line c), showing that the Healthcare sector is strongly outperforming the S&P 500 right now. The weekly OBV has dropped further below its WMA. From the January 22 high of $105.08, XLV is currently down 24.7%. 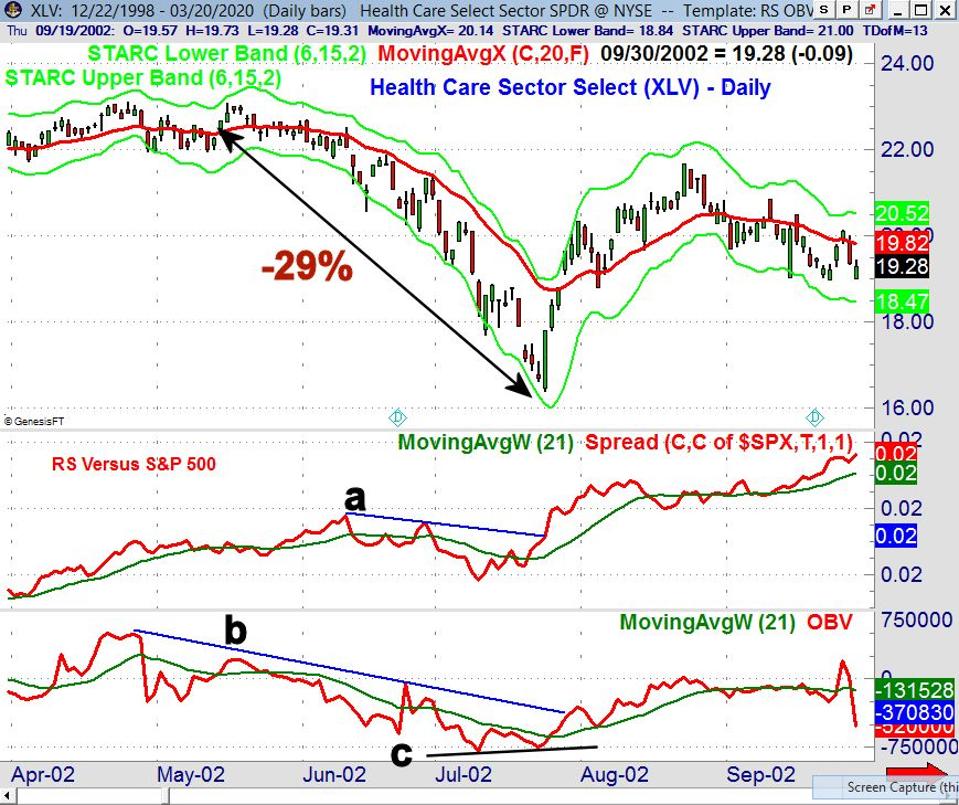 There was another sharp decline in XLV during the 2002 bear market. From the May 2002 high, XLV declined 29% before it bottomed out in late July. The day after the correction low, XLV rebounded dramatically, closing above the highs from the past three days.

XLV’s daily RS moved through its resistance (line a) and turned positive one day after the lows. The daily OBV made higher lows (line c) as XLV was making lower lows. The move through the downtrend (line b) confirmed the bullish divergence. The rally from the lows took XLV up 25% from the lows and lasted until late August of 2002. 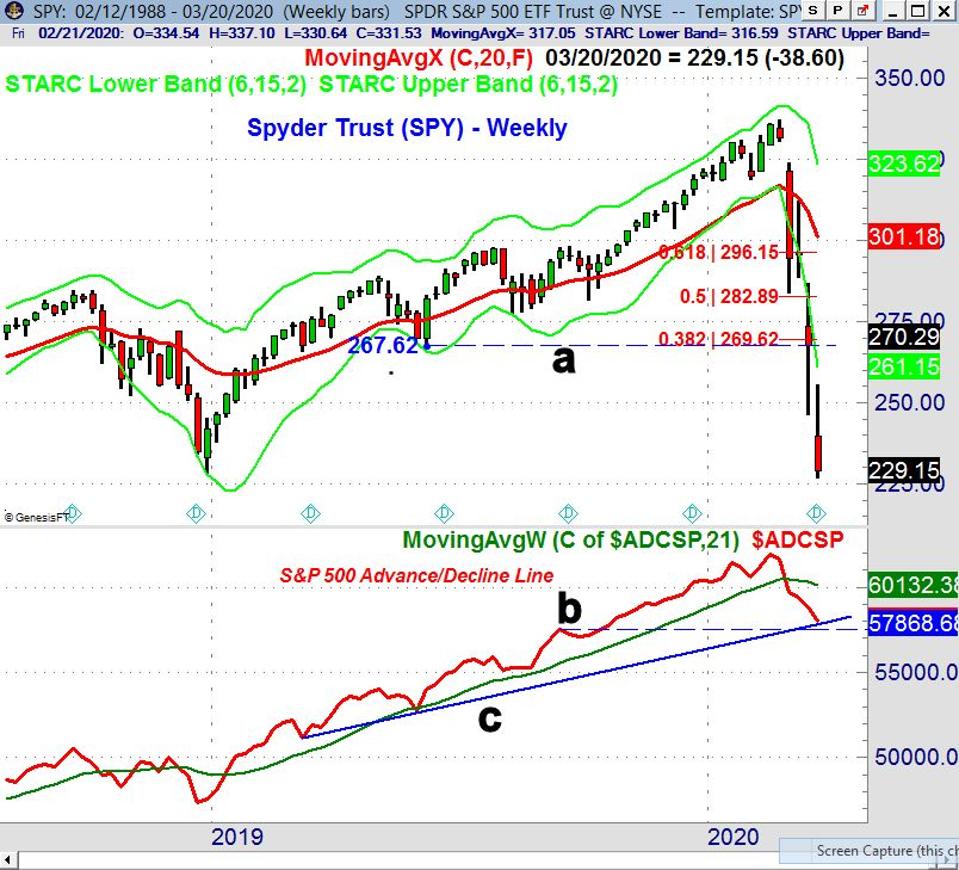 Last week, the SPY made it as high as $254.67 on Tuesday, which is the first weekly resistance level to watch. The June low at $267.62 (line a) was important support, and now becomes important resistance. The 38.2% Fibonacci support, also now resistance, is at $269.62. SPY closed 12% below its weekly starc- band.

The S&P 500 Advance/Decline line declined further last week and is now testing the uptrend from the June-August lows (line c). This also coincides to the support from the September highs (line b). The A/D line’s WMA is now declining, so any rebound in the SPY should be checked against the A/D line analysis. 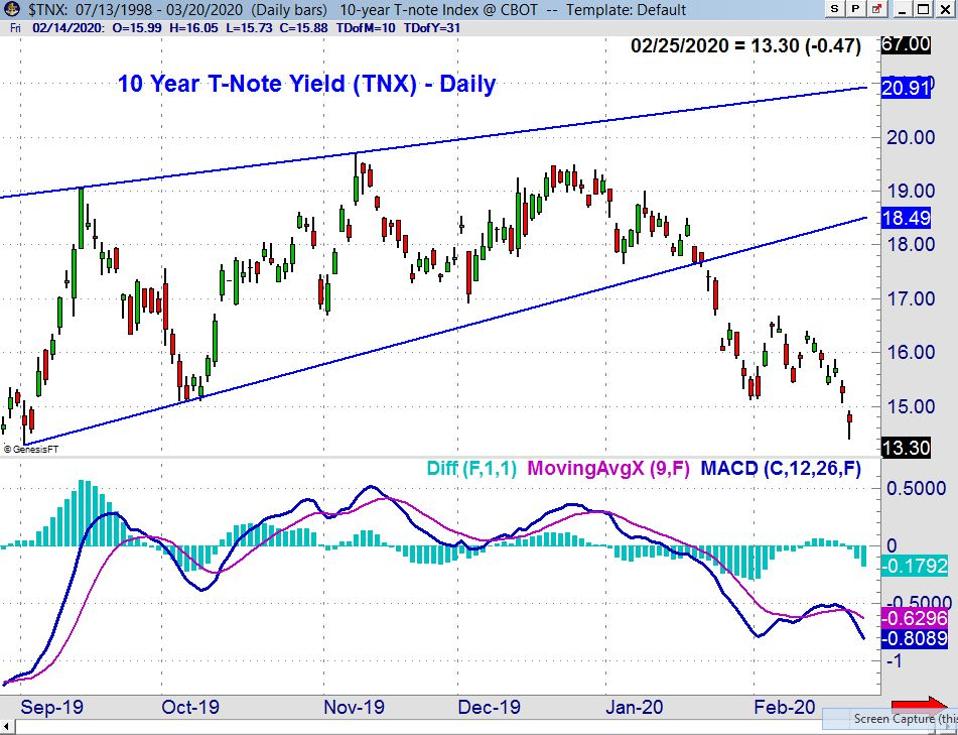 The plunging interest rates have caused havoc for both bonds and stocks, but this week’s stimulus package could help change the tone in the bond market. The daily chart of 10 Year T-Note Yields shows no signs yet of a bottom, as yields gapped lower late in the week.

The Moving Average Convergence-Divergence (MACD) lines are negative and show no signs of a bottom. If rates do turn higher, it should help the Financial Sector Select (XLF), which is the second-worst sector ETF, down over 38%YTD.

A short term market bottom is likely in the next week or so. It will then be the strength of the rally and the news that will help determine whether a stronger bottom can be formed, and at what levels.

This Bitcoin Challenger Is Suddenly Soaring And Fast...

A Recent College Graduate Takes On Bullying As...