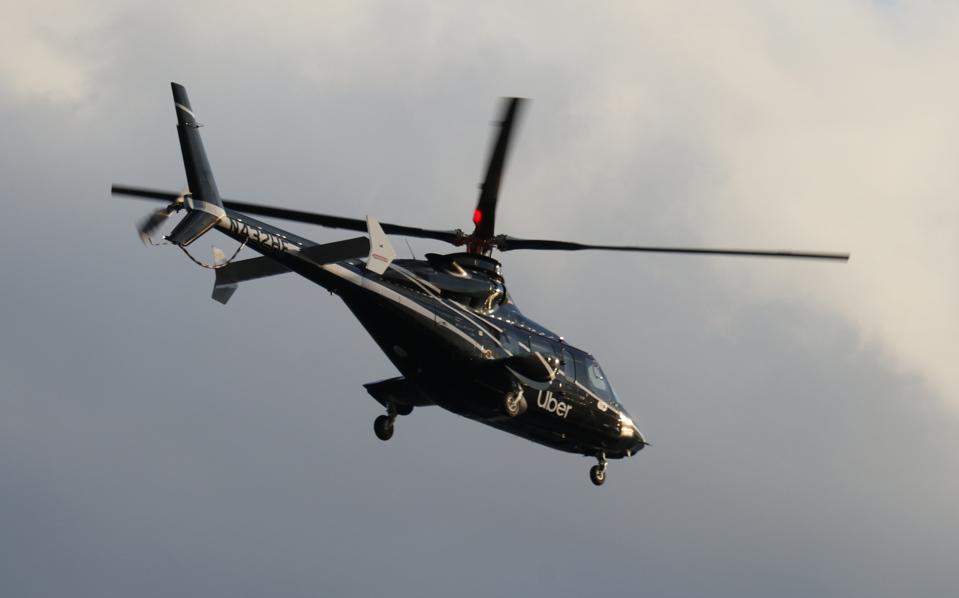 NEW YORK, NY – DEC 11: An Uber helicopter takes off from the heliport in lower Manhattan on December … [+] 11, 2019 in New York City. (Photo by Gary Hershorn/Getty Images)

You don’t have to be a billionaire to escape traffic snarls while the U.S. continues the longest economic expansion in its history. That’s because those at the top of the economy are basking in prosperity, and businesses have taken notice.

Assets belonging to the top ten percent of U.S. households now average $4.5 million in value. That’s a 19% increase since the Great Recession, while low-net-worth households—those in the bottom 40%—have lost 16% of their worth.

That data from the Federal Reserve reinforces the fact that overall wealth in the American economy has been concentrating decades, and rising to the top. Wealth belonging to the top 10% has grown three times faster in the last 30 years than assets belonging to the middle class.

As a result, some businesses are tailoring their goods and services to capture this wealth growth in the top decile in what New York Times economics reporter Nelson Schwartz calls the “velvet rope economy” due to its exclusive pricing.

Helicopters, for example, are no longer for the ultra-rich alone. In New York City, where travel distances are short and traffic snarls are constant, anyone with a low tolerance for gridlock, and some extra cash, can choose an eight-minute helicopter ride to replace an hour (or more) spent in street traffic.

According to data provided by the Port Authority of New York and New Jersey, helicopter landings at LaGuardia, JFK, and Newark have all seen substantial growth between 2014-2018, suggesting that some airline customers will spend additional funds to shorten their overall travel time.

At JFK, helicopter landings increased 24% between 2014-2018, to an average of 12 landings per day in 2018, while the total number of airplane flights to and from the airport increased just 8% over the same four years. Newark saw the sharpest rise in helicopter traffic with an 81% increase in four years, averaging 30 landings per day in 2018, eclipsing a 15% increase in overall air traffic. And 41% more helicopters landed at LaGuardia between 2014-2018 compared with just 3% growth in other air traffic.

New Yorkers depend on taxis, Ubers, Lyfts, and a collection of other services, to shuttle them around the city. But even the most expensive chauffeur must drive down streets clogged with traffic. And given that limousine prices can easily exceed what it costs to buy a helicopter seat, it’s no surprise that people who can afford luxury transportation might look toward the skies. In October, Uber claimed to launch an experimental helicopter service between Lower Manhattan and JFK.

Like its ride sharing service, which relies on independent drivers who own or lease their own vehicle, Uber does not own or operate any helicopters. For that, it partners with HeliFlite, an aviation company based in Newark, New Jersey, whose more traditional clients pay $4,950 per hour, the company’s standard rate, to charter a whole helicopter. Even at that price, HeliFlite’s chartered helicopter service is growing, a company representative said.

Uber, by limiting its destinations to airports, and selling single seats rather than whole aircraft, aims to supply elite travel to the beneficiaries of America’s latest economic expansion for a price of $200-225 per seat. However, the company would need to charge at least $330 per seat, filling four seats per Manhattan-JKF journey, to receive what HeliFlite does for one hour of flying time.

Perhaps for this reason, Uber does not currently provide a transparent way to book a seat on one of its helicopter flights.

For New Yorkers wanting a reliable eight-minute helicopter ride to JFK, LaGuardia, or Newark, Blade remains the go-to company. With three Manhattan locations, a seat in one of its airport-bound helicopters will cost $195. And like the commercial airline industry, Blade uses tiered pricing plans to extend additional services or savings for those who can afford to purchase in bulk.

Its GX plan, for example, offers flight discounts to customers under the age of 28, whose parents’ income may have trickled down to them rather than the economy at large, wanting to fly between Manhattan and the Hamptons or Nantucket. Blade’s website says its GX plan also offers retail discounts, special access to festivals like Burning Man and Coachella, as well as access to privileged networking events that it claims “could lead to life-changing business deals and friendships.”

For those who can newly afford a helicopter jaunt, forgetting what a traffic jam feels like has never been easier. But if that shrinks our ambition to solve annoyances affecting a great many more people, a helicopter ride will prove costlier than its advertised price.

A World First: How The Bundesliga Is Looking To Redefine Sports Broadcasting