LITE Is The Core Of Apple’s AR Success

Augmented reality for the masses has been promised before, but it’s nearer now than ever. And it is going to be huge.

Mojo Vision is not your average optical company. The Saratoga, Calif., firm makes a contact lens with circuitry and a tiny heads-up display capable of beaming images directly into the wearer’s eye.

The actual lenses are not ready for the public. Contacts are regulated by the Food and Drug Administration. Lenses made from new materials need thorough testing. Even once approved by the FDA, it takes time for any new product to reach consumers, let alone one made with copper wires, radios and a screen the size of a grain of sand.

The quick-to-market strategy, according to a story at Techcrunch, is to focus on medical applications in the beginning. Mojo is working with the Vista Center for the Blind and Visually Impaired. The first lenses will use real-time contrast and lighting enhancement to help with night vision and severe sight limitations. So far, this strategy seems to be working. The FDA has granted Mojo a Breakthrough Device designation, a fast-track to review priority.

In the future, Mojo hopes a feature called invisible computing will boost the site of even average wearers. In short, it will give them superpowers.

A firefighter might get access to a building’s schematics while monitoring temperature information. A recreational cyclist might have access to her heart rate, the road elevation and even the number of calories she’s burning as she climbs the slope.

All this information would be delivered to a 14,000 pixel-per-inch display with built-in image stabilization and a wireless radio to collect and transmit real-time data. Eye tracking would help wearers navigate the software. 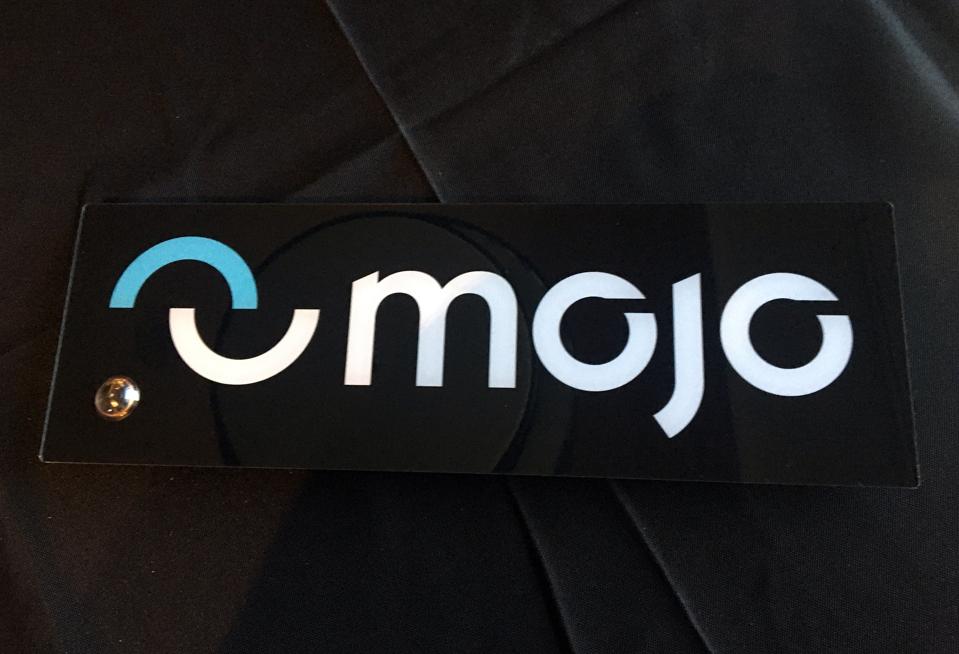 A smart contact lens prototype (L) developed by California startup Mojo Vision which delivers an … [+] augmented reality display in the users field on vision is seen on January 8, 2020, in Las Vegas, Nevada. – Mojo Vision, a startup working on “invisible computing,” on January 16, 2020, unveiled a smart contact lens which delivers an augmented reality display in a user’s field of vision. The Mojo Vision contact lens offers a display with information and notifications and allows the user to interact by focusing on certain points. The rigid contact lens, which the company has been developing in stealth mode for several years, may also be used to help people with visual impairments by using enhanced image overlays, and has obtained US approval for testing it as a medical device. (Photo by Robert LEVER / AFP) (Photo by ROBERT LEVER/AFP via Getty Images)

Mojo isn’t publicly traded. But luckily for investors, it’s not the only company jockeying to take AR mainstream.

Intel developed a reference set of smart glasses called Vaunt in early 2018. The specs came out of its New Devices Group and featured many of the same cutting edge technologies as Mojo, albeit in the form of stylish horned rim glasses that would have done Dick Tracey proud.

Unfortunately, like so many Intel consumer products, Vaunt is now dead. The problem wasn’t the tech, though. The problem is cost. While companies have proven they can augment our reality with live data, the components needed to do so are simply too expensive for the mass market.

That’s where Apple comes in.

The Cupertino, Calif.-based firm was not the first to put a multi-touch screen on a phone. Apple was also not the first company to add biometric authentication.

But when it made the leap, most competitors soon followed. Now, every smart device has a touch interface and either fingerprint or facial recognition sensors.

Apple used its industry leadership to change the minimum standard for smart devices. The company then used its incredible scale to drastically drive down component prices.

Statista, an online data analytics company, forecasts that the average selling price of fingerprint sensors for mobile devices will fall below $2 per unit in 2020.

Now Apple is about to go all-in for AR.

According to a September Wired report, references to stereo displays, like the ones needed for AR, are showing up in current builds of Apple operating system software. And ARKit, its software developer kit, made its debut in 2017. The company followed with a number of AR acquisitions, including Akonia Holographic in 2018.

But Apple isn’t the smartest way to get into AR. After all, while it may lead the AR trend, it isn’t at its core.

For investors, the clear play for now is Lumentum Holdings. The San Jose, Calif. company makes optical components for the telecommunications sector and 3-D sensing laser diode for the consumer electronics sector.

Currently, the company is best known for making the sensor used by Apple for Face ID in iPhones. The Cupertino, Calif, company uses Lumentum gear because of scale. The firm is the largest supplier of 3-D sensing laser diode — a tech is critical to future AR applications.

Most exciting for investors — and for Lumentum — is the relationship is not exclusive. Apple must compete with other device makers and new applications, primarily in automotive and industrial robotics.

This means Lumentum is in the sweet spot. Its best customer is ramping up AR. If history is any indication, Apple competitors will follow. The potential smartphone market outside of iPhone is 4x. Add cars and factory robots and new market may be billions of devices.

The San Jose, Calif.-based optical sensor company may seem far removed from a startup making a contact lens with a tiny screen and radios. Lumentum and Mojo are connected by scale. You can’t have one without the other.

Investors should look for pullbacks to get in on this opportunity.