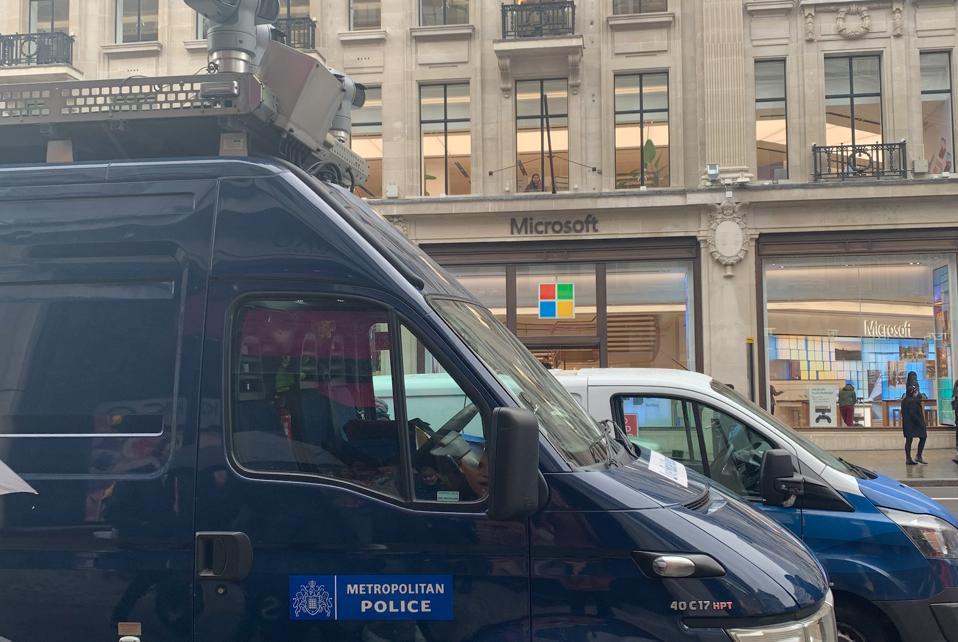 London police turn on live facial recognition just outside the Microsoft store in the center of the … [+] city.

Just across from the Microsoft store on London’s Regent Street, and just outside the entrance to the Oxford Circus tube station, cameras atop dark blue police vans are watching passersby.

London’s Metropolitan Police says the rollout of the “live” facial recognition across the British capital would reduce serious crime, though it’s not without its critics, especially those decrying its impact on privacy in one of the world’s busiest shopping districts.

The tech is fairly simple: cameras scan faces and when one matches with one on their list of wanted criminal suspects, the police swoop. But it’s more complex than that, with claims that the technology will often falsely identify people as criminals, especially when they’re not white. In December, a U.S. government body, the National Institute of Standards and Technology (NIST), released a report in which it tested tech from nearly 100 different companies, finding that in most cases “empirical evidence” showed age, race and gender affected accuracy. It noted that some could misidentify people in certain groups up to 100 times more frequently than others. “Across demographics, false positives rates often vary by factors of 10 to beyond 100 times,” it wrote.

“It’s discriminatory – the tech is most likely to misidentify women and people from black, asian and minority ethnic communities,” Liberty’s literature warned. “It violates our privacy rights… By mass-scanning the faces of everyone in range, the police are capturing personal biometric data without our consent.”

Liberty has launched a legal challenge in a bid to keep facial recognition off U.K. streets, supporting Cardiff, Wales, resident Ed Bridges, who claims his privacy and data protection rights were violated by South Wales Police’s use of the technology.

Despite such concerns, the Met in its flier said that live facial recognition tech won’t store people’s faces in any database. The tech, provided by Japanese company NEC, instantly tries to find matches with a pre-collected set of faces of known criminal suspects.

Faces of those who aren’t on watchlists are blurred out in the footage viewed by officers inside the van and are not stored on police computers. And, the Met added, it’s only used at specific locations for a limited time.

“This technology helps us keep Londoners safe,” it added. “We are using it to find people who are wanted for violent and other serious crimes.”

But such claims didn’t wash with Silkie Carlo, director of Big Brother Watch, who said her organization was “appalled” that London mayor Sadiq Khan had approved the technology. “It’s alarming to see biometric mass surveillance being rolled out in London. Never before have citizens been subjected to identity checks without suspicion, let alone on a mass scale,” she added.

“All the evidence shows this tech makes us less free and no safer… This undemocratic expansion of the surveillance state must be reversed.”

An independent review of the Met’s uses of facial recognition from July last year concluded that the police’s legal explanation for using the tech was “inadequate” and that it could be deemed unlawful if challenged in court.

The rollouts continue, however, and come at a time when the U.K. is going in a different direction to Europe and parts of the U.S. where facial recognition bans are either being considered or have either been enacted. The panic has become almost palpable in America after the revelation that Clearview, a company that’s scraped billions of people’s photos from the web without anyone’s apparent permission, is selling its facial recognition into hundreds of police departments.

Another pertinent point was raised by a Twitter user who happened to be passing the London surveillance op: will tourists, who number in the thousands every day, have any idea what’s going on?

After Years Of Impunity For Mass Atrocities, Nigeria Faces A New Wave Of Violence By A Daesh Affiliated Group

Light Pollution Is Bigger Threat To Astronomy Than...