Breaking
In Need Of A Competitive Edge? Look To...
Think Small: Timely Picks To Capture The Reawakening...
Patient Gets Covid-19 Swab Lodged In Her Lung...
Nine Signs You’re Not Being Effective During Your...
Chromebooks Can Now Run Windows 10 – Find...
Will Biden’s Tax/Benefit Plans Help/Hurt You And The...
This Fashion Brand Turned A Stripe Into A...
Shots In The Dark: Why Access To A...
What Building Wealth Really Takes In Business
Building A Circular Economy In New York City...
How To Cast Your Vote Against Election Scams
New Science On Stress: Feeling Your Feelings Works...
Why Now Is The Right Time To Acquire...
7 Obstacles That Prevent People From Starting Businesses...
Booking Holdings Falls; Likely To Remain A Risky...
Apple iPhone Crushes Samsung Galaxy In Important New...
Home Business Looking Ahead: Building Around Luka Doncic And Kristaps Porzingis
Business

Looking Ahead: Building Around Luka Doncic And Kristaps Porzingis 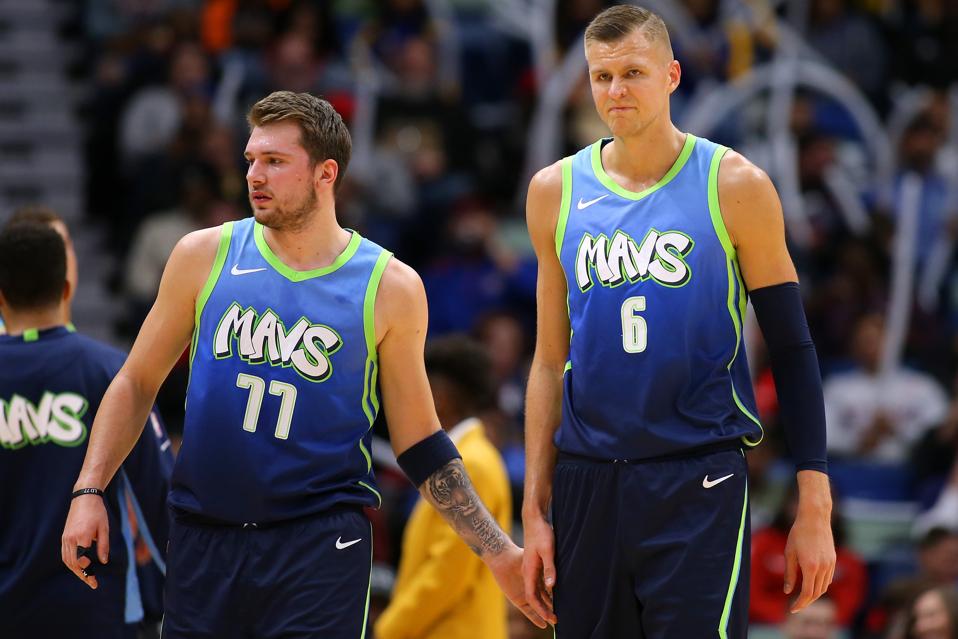 NEW ORLEANS, LOUISIANA – DECEMBER 03: Luka Doncic #77 of the Dallas Mavericks and Kristaps Porzingis … [+] #6 react against the New Orleans Pelicans during the first half at the Smoothie King Center on December 03, 2019 in New Orleans, Louisiana. NOTE TO USER: User expressly acknowledges and agrees that, by downloading and or using this Photograph, user is consenting to the terms and conditions of the Getty Images License Agreement. (Photo by Jonathan Bachman/Getty Images)

The Dallas Mavericks are currently sitting pretty at 34-23, holding the 7th seed in the Western Conference Playoff picture, just 2.5 games behind the fifth seed. That record, it needs to be mentioned, has been accomplished with second-year sensation Luka Doncic missing 12 games, and his partner-in-crime, Kristaps Porzingis, missing 14.

Despite the above missed games, the Mavericks are sporting the best offense in the league. That’s in large part due to a supporting cast, which includes Maxi Kleber, Dorian Finney-Smith, Dwight Powell, Delon Wright, Seth Curry, and Tim Hardaway Jr, that has embraced being complementary pieces instead of the main attraction.

For Dallas, it’s a luxury to already know what works next to Doncic and Porzingis, at least from an offensive perspective. With Doncic still on his rookie contract for an additional two years after the conclusion of this season, the Mavericks could utilize his low salary in those years to make further upgrades to the roster, and with a blueprint already handy on how to optimize the All-Star, it gives them an opportunity to zero in on players with certain specific skillsets.

One trend Dallas needs to keep going is their three-point shooting volume. They currently rank second in the league in attempts and makes, and sixth in efficiency at 37 percent accuracy.

Doncic is an outstanding ball-handler who excels at operating in properly spaced-out offenses, for which Porzingis himself serves quite the purpose, so leaning into the three-point shot should be a given.

Surprisingly, both Doncic and Porzingis showcase only modest efficiency from long range themselves, but that hasn’t affected how opponents defend them due to the degree of difficulty many of those attempts stem from. Doncic in particular likes the step-back three-pointer, which is a devastating back-breaker for opponents when it drops, and Porzingis has gotten the green light to fire when open, even if he is several feet beyond the actual line. As Doncic ages, and Porzingis gets more comfortable getting back into NBA life after missing over 20 months to an ACL tear, those percentages are inclined to get better.

Where Dallas could afford to make upgrades would be at the wing position, and they should be planning for it already, as the clock has begun ticking.

2021 is arguably the final year in which Dallas can realistically afford to make a splash. Doncic’s 2022 cap hold of $30.3 million will otherwise prevent Dallas from having significant cap space, as would Porzingis’ salary of $33.8 million. In 2021, when Hardaway Jr comes off the books, Dallas could be sitting on a payroll of just $72.2 million, giving them a chance at a max player – assuming they wish to go that route.

While the Mavericks do have Dorian Finney-Smith, who has developed into a reliable three-point shooter from the corners (43.3 percent), and is one of the team’s best defenders, he needs help. The team ranks 18th on defense, so identifying someone who can help them clean it up on that end of the floor, while adding to the offense in the form of shooting is of vital importance.

Finney-Smith, who can play either forward spot, has the flexibility to accommodate another wing, or small-ball power forward if the Mavericks decide to go that route. Fortunately for Dallas’ cap sheet, Finney-Smith is a bargain. He’s earning $4 million annually, and his contract doesn’t expire until the summer of 2022, the same year a presumed Doncic extension would kick in.

So what should in play for Dallas? Well, it depends on which route to go.

Depth is currently one of Dallas’ strengths, so doubling down on that could be a viable play.

Spending their cap space on numerous high-caliber rotation players at various positions, similarly to what the Chicago Bulls did in the summer of 2010 to build around Derrick Rose and Joakim Noah, would give the Mavericks a strong chance at coasting through the regular season, and keeping the legs of their primary guys fresh for the playoffs.

If recent history is any indication, teams with great depth, such as Toronto, Milwaukee and Denver, relies greatly on being able to throw fresh bodies into games during the dead months of January and February to squeeze out more wins. The Mavericks could easily use that same approach and thus limit the use of Doncic and Porzingis.

It’s also worth nothing that having several impactful players increases a team’s chances of making a consolidation trade down the line.

Dallas could also decide to gamble on a few young players who typically move under the radar – like Miami’s Derrick Jones Jr or San Antonio’s Trey Lyles – and hope one or two pops.

Alternatively, the Mavericks could swing for the fences and go hard after a star forward, sacrificing depth for more top tier talent. It couldn’t hurt to place a call with Giannis Antetokounmpo to see if he’d be interested in creating a new Euro superteam. The odds of that would obviously be minuscule, especially given how Milwaukee have been playing in recent years, and not to mention the increased paycheck the Bucks can offer the defending MVP.

But in general, going after a star wing is an option they have, if they wish to pursue it. And, to be fair, Dallas can provide a solid argument to stars looking to join the team, given their roster and starpower in Doncic.

Should Dallas succeed in signing a star, they would still have Finney-Smith, Powell, Wright, Curry, and Kleber on the books, all on reasonable deals (totalling a combined $40.5 million), meaning there would be a bench present in some regard. It might not be as deep as Toronto’s, but it’d be a solid foundation to build a set rotation on, if nothing else. The Mavericks would then need to use exceptions moving forward to continuously add to the team.

Dallas could go the way of prioritizing a young player, like Phoenix’s Kelly Oubre Jr, who will be an unrestricted free agent in 2021 and presumably won’t cost as much as an All-NBA level talent, while having enough money left to add impactful bench players, and maybe a flyer on a young player.

In this scenario, Dallas would add more talent to their starting unit, but maintain the flexibility to round out the bench nicely, where they will be options such as Dante Exum and Elfrid Payton on the market.

There are several paths the Mavericks can take, and it ultimately boils down to what approach they deem most effective, and which scenario brings them closest to an NBA title.

To have a player of Doncic’s caliber, who produces at the pay he’s receiving, opens up a world of possibilities.

From Open Hiring To Negligent Hiring: How To Reduce Risk And Promote Inclusivity

TIME’S UP Reacts To Harvey Weinstein Verdict: ‘This Marks A New Era Of Justice’