Breaking
How, When And Where You Can See A...
New $2.2 Trillion Stimulus Bill Proposed—$1,200 Stimulus Checks,...
Why Do We Do What We Do? Manipulating...
California Brand Goes All-American As Amazon Bans Foreign...
The 3 Best Analytics Companies of 2020
Senator Cory Booker: Supporting Small, Minority-Owned Businesses Will...
Trump’s Taxes Are Finally Leaked—What’s Next?
Washington Heats Up Ahead Of First Presidential Debate:...
Systemic Racism Leads To Disparities In Nursing Home...
The New Regular: Prepare For Conflicts Of Customer...
Web VR.0 – Have VR Websites (Finally) Arrived?...
This Next Evolution Of E-Commerce Did $18 Billion...
This Next Evolution Of Ecommerce Did $18 Billion...
IRS Taxes Most Lawsuit Settlements And Exact Wording...
13 Questions To Answer Before You Die
Just Launched: Long-Term Stock Exchange For Companies Building...
Home Business Los Angeles Mayor Recommends Public Wear Masks, As Trump Administration Weighs New Guidance
Business 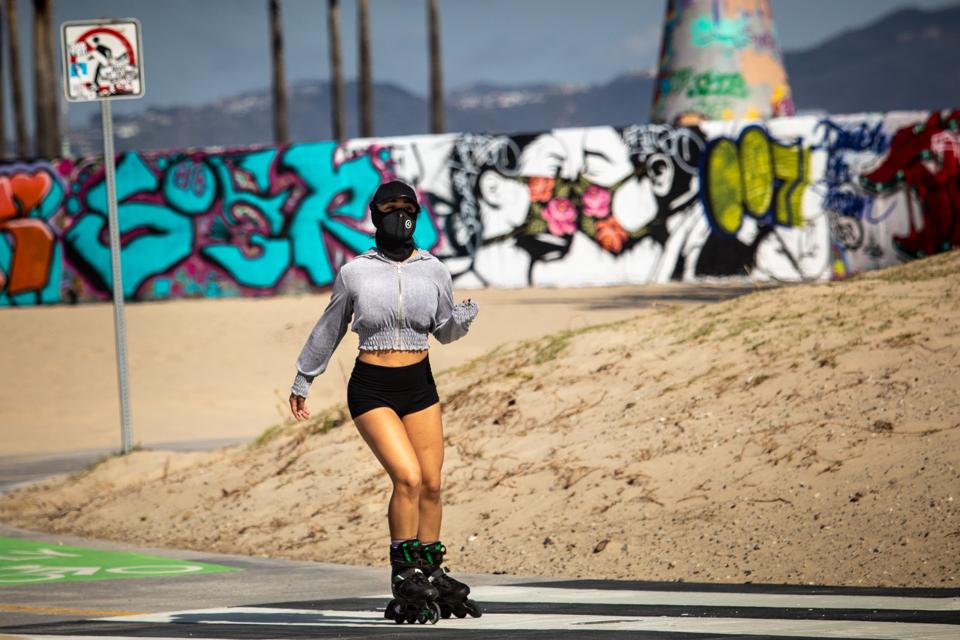 A woman wearing a face mask skates along the bike path in Venice Beach on Saturday.

Topline: Los Angeles, California mayor Eric Garcetti recommended Wednesday that the city’s 4 million residents wear masks while outside the home, the latest in a series of measures taken by officials around the state—that came before guidance from the Trump administration on battling coronavirus—which some experts say is helping California “flatten the curve.”

Crucial quote: “Californians should not have a false sense of security if they choose to wear [masks],” state Health and Human Services Secretary Mark Ghaly told ABC News. “Make sure you’re also staying six feet away from other people if you have to leave your home to get groceries or prescriptions.”

Big number: Nearly 10,000. That’s how many Californians have been infected by COVID-19, while at least 215 had died as of Thursday, according to data from Johns Hopkins University. Louisiana has around 7,000 confirmed cases, but a higher death toll: 273.

Key background: There is no universal consensus on mask wearing, the Washington Post reported Monday. The CDC, along with the World Health Organization, has previously recommended that those caring for sick relatives wear masks, along with those who are already ill and around other people. According to the New York Times, masks work by stopping infected droplets from the wearer’s nose and mouth, and if everyone wears a mask, it reduces overall community transmission. “The value of the mask isn’t necessarily to protect you from getting sick, although it may offer some protection,” said former Food and Drug Administration commissioner Scott Gottlieb Sunday, adding, “It’s to protect you from other people. So when someone who’s infected is wearing a mask, they’re much less likely to transmit infection.”

Coronavirus, Economic Meltdown And The World Of Impact: Insights From Kate Danaher Of RSF Social Finance

The Network Gap And Its Impact On The War For Talent