Breaking
Employers: Eight Red Flags You May Not Notice...
Ted Lasso, Other Apple TV+ Shows Arriving Soon...
What Are Working Capital Loans and When Should...
The 10 Biggest Trends in Entrepreneurship to Look...
Clubhouse Has Grown 10X In Two Months. Here’s...
Here’s Why Tyson Foods Stock Looks Undervalued At...
How To Maintain Client Relationships During Long Projects
WhatsApp Is Pushing Ahead With Its Controversial Privacy...
Australia In Talks With Facebook’s Zuckerberg Over ‘Outrageous’...
What To Expect From Deere Stock In Q1?
GME Saga Dissected In The House Committee On...
What’s Next After Mars? The 8 Spectacular Space...
Integrating Life Insurance With Lifetime Income – Part...
How To Invest Your Time Wisely In The...
Spring Forward With These Smart Home Gift Ideas
Hybrid Electric Aviation Pioneer Ampaire To Be Acquired...
Home Business Loss To Zamboni Driver Another Sign Maple Leafs Lack Championship Mettle
Business 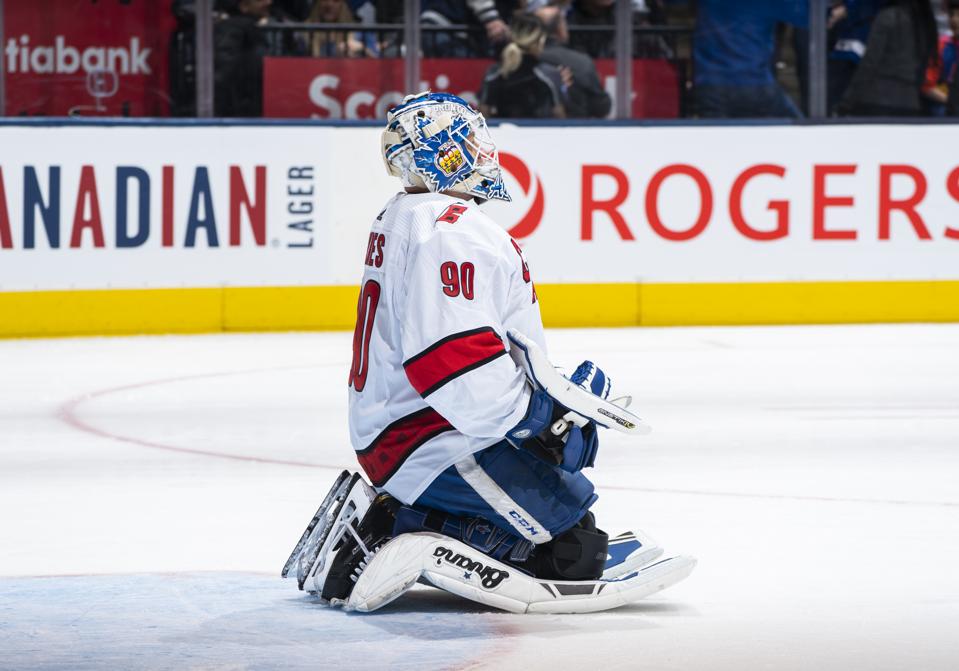 David Ayres shocked the Toronto Maple Leafs by beating them as the emergency backup goaltender after … [+] Carolina’s two goalies were injured. (Photo by Kevin Sousa/NHLI via Getty Images)

It’s ironic that a Toronto Maple Leafs organization that’s always been on the forefront of analytics in hockey, which has come with an emphasis on the importance of shots on net, was only able to muster 10 shots on net after emergency goaltender David Ayres entered the game for the Carolina Hurricanes on Saturday.

That’s right, the Hurricanes were ahead 3-1 when Petr Mrazek, their second goaltender of the night, followed starter James Reimer’s path to the locker room with injury and a former Junior B goalie that drives a Zamboni as part of his work at Coca Cola Coliseum entered.

Carolina promptly extended the lead to 4-1 before Toronto scored on its next two shots on net.

But then the Maple Leafs landed just eight (eight!) more shots the rest of the night when the mentality should’ve been to shoot the puck from any spot they had the puck.

Obviously any retelling of the tale of the Cinderella goalie will have to be dominated by credit going to the 42-year-old Ayres for holding his own and making those eight saves. Credit will also go to his Hurricanes one-night teammates who fought for every puck like their lives depended on it, blocked 12 shots and had 76 shot attempts to Toronto’s 49, proving they were keeping the puck in the attacking zone to relieve the heat from Ayres.

But equally the Maple Leafs deserve every ounce of blame and ridicule they’re going to receive after their performance in a 6-3 loss. And their lack of the gumption to get even a single standings point against a desperate team and an overmatched goalie was the ultimate sign that they still haven’t learned what it takes to win under pressure even after their two Game 7 defeats the past two postseasons to the Boston Bruins.

“It’s another embarrassing night, right?” Maple Leafs coach Sheldon Keefe told the media after the game. “Embarrassing nights shock the system a little bit, you know? I think this game was different than the others. I don’t think today was a lack of work ethic or anything like that. Today was just our execution. We couldn’t connect on a pass. Part of it is them … the execution was really poor and then you’ve got a team that works the way that they do.”

At least the coach sounded disgruntled and even used the E word (embarrassed) to describe the performance. This is a Maple Leafs team that is actually spending more than $110 million in payroll, according to CapFriendly.com, in a league where upper limit of the salary cap is $81.5 million. More than $40 million of that salary cap is tied up in just four forwards – Auston Matthews, John Tavares, Mitch Marner and William Nylander. Yet they went into the Carolina game with 72 points, barely hanging on to a playoff spot and 13 points behind Tampa Bay for second place in the Atlantic Division (not to mention 18 points behind Boston for first place).

All four of the above-mentioned stars were in the Maple Leafs lineup on Saturday; somehow Nylander failed to land a shot on net, Marner had just two shots on net.

Marner called himself out.

“Knowing that was a big one, knowing that this team’s going to come out like that, it’s bulls—- on my part,” he said.

The Maple Leafs clearly tightened up as the clock ticked away, their deficit stood at three goals and the home crowd turned on them. They should be beyond that type of reaction to pressure. They should be able to be the aggressors with such a golden opportunity in front of them. Instead their execution got worse and they cost themselves standings points that could be the difference between them making the playoffs for the fourth straight season or missing the postseason.

After all their disappointing losses and early postseason exits, and even with all their high-priced talent, the Maple Leafs still haven’t developed a championship-caliber character.

Now they have to rebound from the ultimate low of losing to a civilian goalie with a response that says they can be an elite team. If they don’t, the organization may have to rethink everything its built the past four or five seasons.

How To Answer ‘Tell Me About Yourself’ In A Job Interview

Will Trump Get Re-Elected And Does It Matter?: EJ Dionne’s New Book