Breaking
Three Essential Components of a Successful Small Business
Pandemic Pet Adoptions Add To Chewy’s Tailwinds, But...
How to Use LinkedIn’s Social Selling Index Like...
Strong Revenue Trend Could Drive EXACT Sciences Corporation...
9 Things To Know Before Starting A Business
‘Game & Watch: The Legend Of Zelda’ Will...
The 9 Fundamental Components Of A Startup Pitch...
How to Get Results from Broken Link Building
Florida Supreme Court Tells The American Bar Association...
How to Write Perfect Paid Social Media Marketing...
How Restaurants Can Design a More Sustainable Food...
Expenses That Small Business Owners Need to Be...
How You Can Make Saying Goodbye To The...
Biden To Meet Royal Family At Cornwall’s Eden...
It’s Going To Be Emotional — Going International...
Peer Mentoring For Students: STEM & Buds
Home Business Lucky Owners Of A ‘Fresh’ Joe Jackson Card And A Signed Christy Mathewson Baseball Reap Windfalls
Business 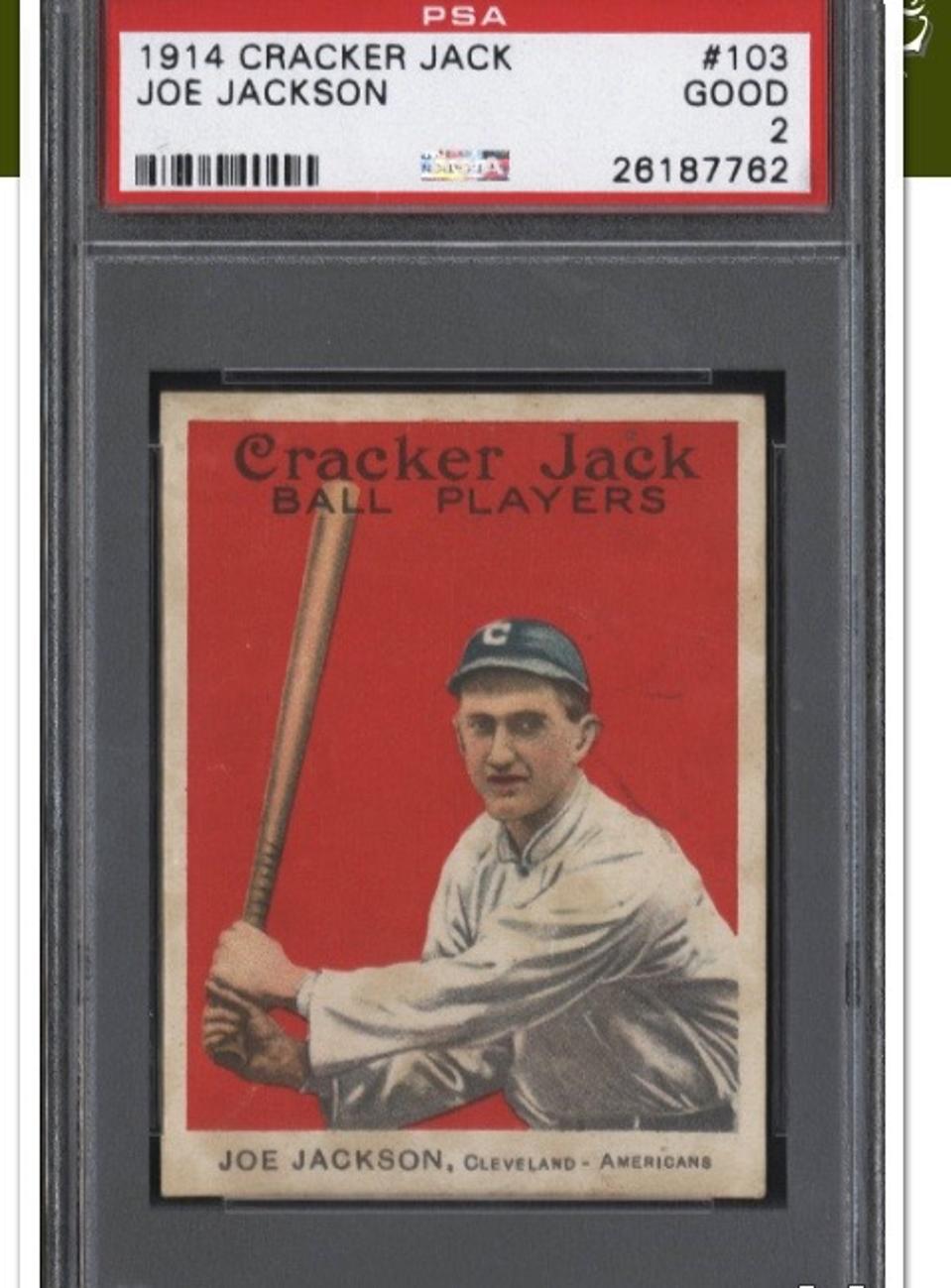 Photo by Love of the Game Auctions

Two non-collectors have hit the jackpot while following similar routes to riches. A rare 1914 Joe Jackson Crack Jack baseball card and a 1925 baseball signed by the two all-time great pitchers Walter Johnson and Christy Mathewson are affording them unexpected wealth in a Love of the Game auction that closes November 30.

I hereby dub the freshly graded card “The Eternal Joe Jackson” because of its magical qualities.

Notes Love of the Game:

The show-and-tell in 1992 about great-uncle Harlan from Washington state left the daughter with a powerful life lesson. Eventually, the family, mainly consisting of two sisters, drove from northern to southern California for a family vacation to submit the card in person to PSA. For many years, it remained in locked a safe deposit box; remaining a secret to the hobby— till now. 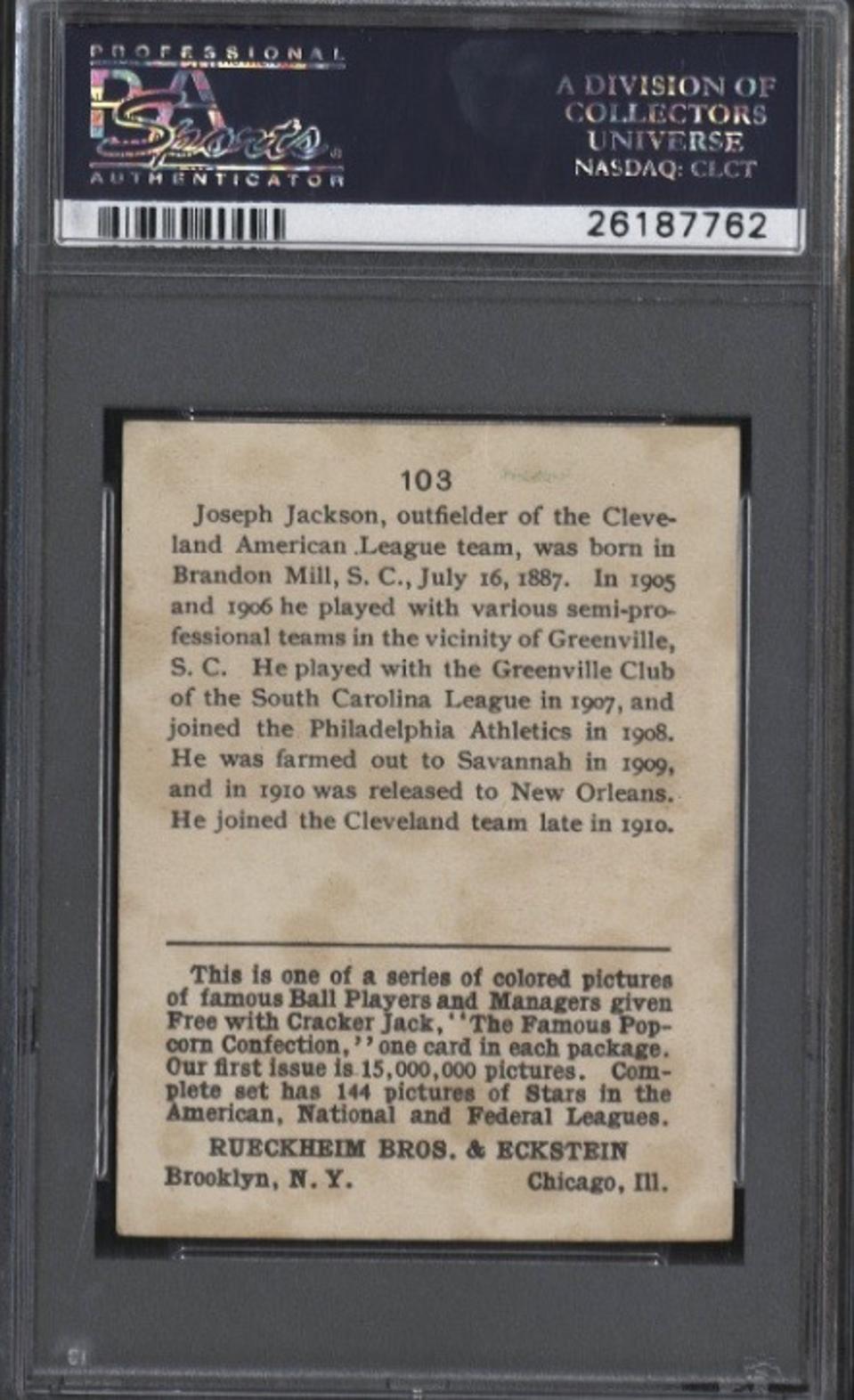 Despite being in a Cracker Jack box, this card is re relatively free of stains.

Photo by Love of the Game Auctions

The 1914 Cracker Jacks carry a premium of two or three times the 1915 set because they were only available in packages of the caramel popcorn rather than being available through mail-order. This Jackson is remarkably clean, given its exposure to the sticky stuff. It is also extremely well centered for the issue. Twenty five bids have pushed it to $29,000. When I spoke to him a few days ago, Al Crisafulli, the auction house owner, said he wouldn’t be surprised if it commands at least $30,000 by his auction’s end on November, 30. It appears that it will go much higher.

The 1914 Cracker Jackson has always been an iconic card because of its beauty and the ballplayer’s infrequent appearance in other issues. Jackson was of course was of the best hitters ever (.356 career average) and banned from baseball because of the Black Sox scandal 100 years ago. The classic film, Field of Dreams, burnished his legacy.

Meanwhile, the same auction features a rare, fresh-to-the-hobby multi-signed baseball with both Christy Mathewson and Walter Johnson. “Authenticated by PSA/DNA, the baseball likely dates to Spring Training of 1925, when all but one of the baseball’s 14 signatories are confirmed to have been in the Tampa area on the same March weekend,” Love of the Game notes. “Within a few weeks, Mathewson had returned to his home in Saranac,NY to nurse the illness to which he would ultimately succumb; this is likely one of the last baseballs he signed.”

Crisafulli expects the extreme rarity to surpass $10,000. So far, there are only two bids, placing the current price at $3,250

The consignor, a fan of antique and thrift shops, kept the ball in a drawer since she paid a song for it at a flea market in the 1980s. She, like the Jackson card owners, submitted it for authentication in person on a family vacation to southern California last winter rather than take the risk of shipping it.

Both the Jackson card and signed ball, notes Crisafulli, are “once-in-a-lifetime finds, exactly the kind of thing we collectors dream about!” 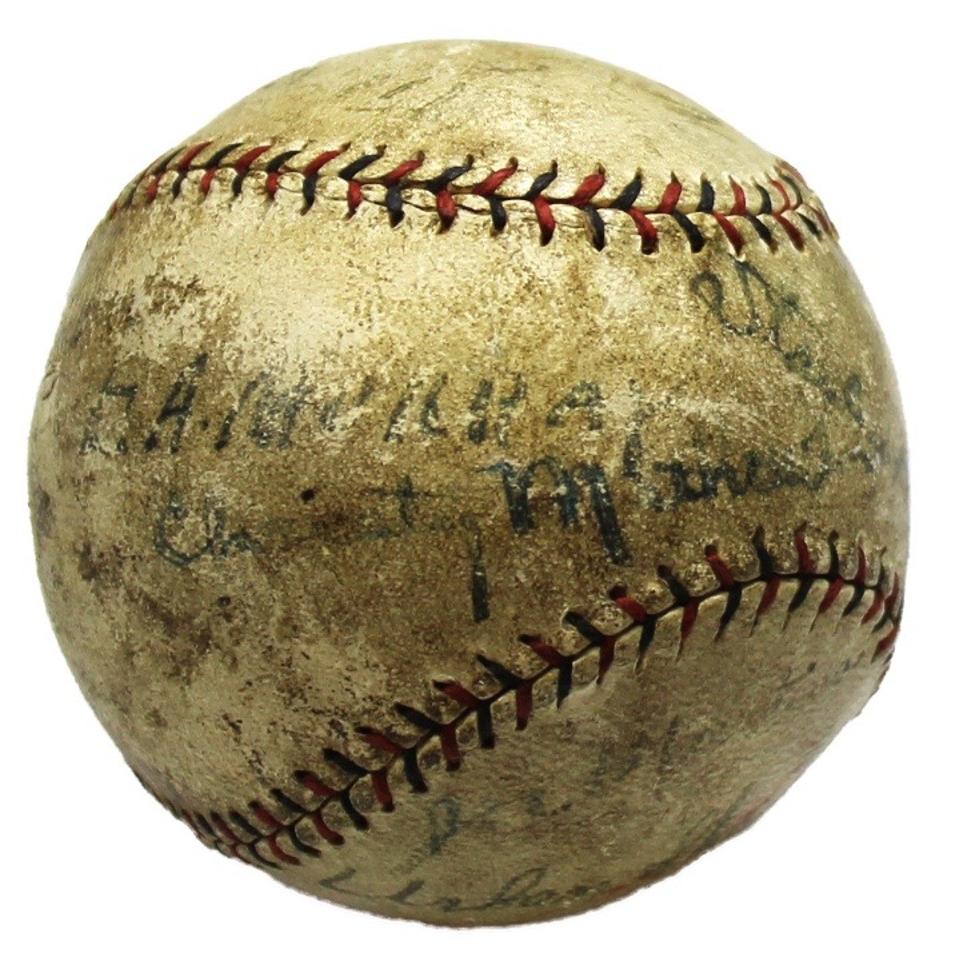 Photo by Love of the Game AuctionsSource