Lucky, Very Lucky: FC Barcelona Versus Getafe Result And What We Learned 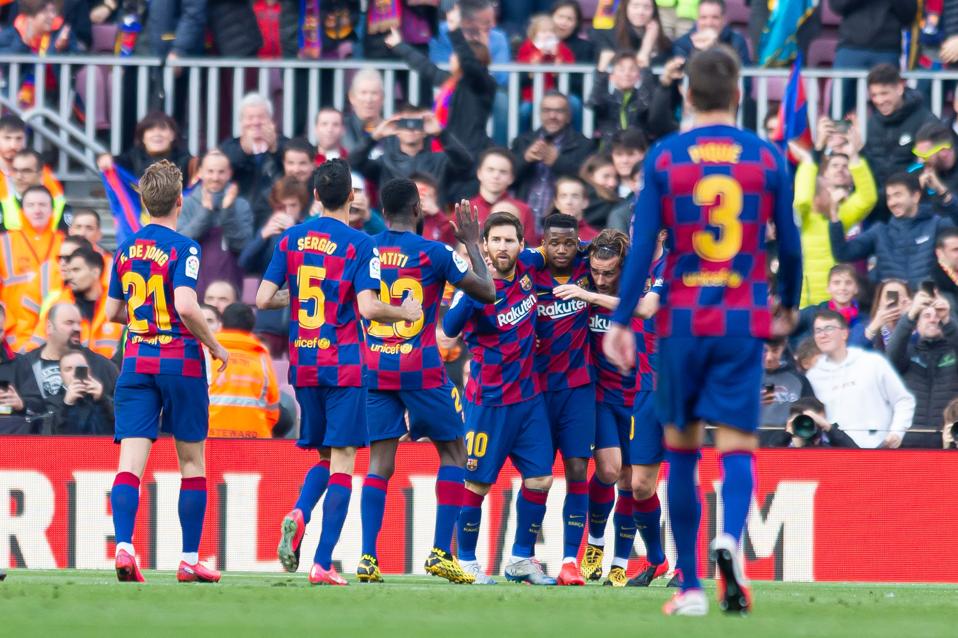 At the Camp Nou on Saturday afternoon, FC Barcelona took on third-placed Getafe. Here’s what we learned from the tie.

There was the odd surprise in Setien’s line-up

Myself and Mundo Deportivo had fancied Arthur to start in midfield alongside Frenkie de Jong in front of pivot Sergio Busquets. And start he did, with a big chance to impress afforded to the young Brazilian.

Jordi Alba was expected to replace the previously poor Junior Firpo, while Gerard Pique and Umtiti manned central defence. Few had foreseen an in-form Nelson Semedo being snubbed for Sergi Roberto, however, while up top it was a front line of Ansu Fati, Antoine Griezmann and Lionel Messi from left to right.

The 61-year-old refusing to comment on the opposition coach in his prematch press conference yesterday, the pair also chose not to shake hands.

Ruled out for six months, his teammates wore t-shirts before kick-off to honour the injured winger.

Messi had Barça’s best chance of the opening 15 minutes

Fed by Busquets with the kind of over-the-back line lob that saw Messi notch three assists again Betis last time out, the Ballon d’Or winner’s shot was unbelivably soft in the one-on-one after a glorious Dennis Bergkamp-esque first touch to bring it down.

Bordalas went in the referee’s book

And therefore had to be careful for the rest of the match should he wish to watch the action from the touchline and not the stands.

Jordi Alba’s afternoon was done before the 20 minute mark

Pulling up with a right abductor niggle, then going off in tears, the Spain international was replaced by a Junior Firpo handed a second opportunity to win Setien over.

Real Madrid and Napoli looming in El Clasico and the Champions League respectively, this is not good….

Barça needed to wake up

Perhaps shaken by that development, a mix-up at the back saw Busquets play Molina through on goal before Umtiti came to the rescue.

An even bigger scare followed

Allan Nyom smashing home a rebound from the resulting corner, VAR ruled it out after reviewing how he had clearly shoulder charged Umtiti to the ground before making his run.

Often catching his fellow La Masia graduate out of position, he was first to every ball and had chances following the disallowed Nyom strike.

Out of nowhere, Barcelona were on top

Big Sam Umtiti finding Messi, the captain provided a one-touch assist – his sixth in three games – when locating Griezmann in the box for his first goal of the Setien era.

Roberto got back into the good books

Messi could have made it three

A free-kick emerged in Messi range, but it was just off target. Shortly after, he was unlucky not to head in a delightful long range Griezmann ball on the stroke of half time. What does he need to do to score, exactly?

Down the tunnel the Blaugrana went

Perhaps getting off lightly after being dominated for swathes of the opening 45, they had taken their chances well and could come out for the second half with a weight taken off their shoulders.

The Culé faithful had come out in bigger force

Recent attendances hovering around the 65,000 mark, and even as low as 45,000 in the Copa del Rey, a 16.00 kick-off time on Saturday, plus the importance of the win and quality of the opposition, boosted numbers.

Angel Rodriguez’s audition got under way in the 52nd minute

A tipped stand-in for Dembélé, the impact substitution could join Barça in the coming days due to a unique ruling and made his entry in a double swtich from Bordalas.

He passed it with flying colours

Losing his marker in the 65th minute, he blasted a side-footed volley past Ter Stegen and silenced the Camp Nou. 2-1. Game back on.

Prevented only by the one handed heroics of Ter Stegen, who managed to stop his tap-in and then tap it away.

A chance for his second of the weekend on a plate, he blasted it into Row Z

The number 8 had been fantastic, and might have felt hard done to when being hooked instead of an anonymous Frenkie de Jong. Only just returning to availability from pubis issues however, it was better not to push one’s luck and risk him for a full 90 yet.

Getafe went full steam ahead with the press

Which their hosts failed to deal with. They looked every bit likely to steal a point here as FCB’s passing was off and simple mistakes were made.

Vidal was introduced to shut this one down

And try to regain some momentum. On for Ansu Fati, the Chilean had work to do.

Vidal helping to spread the ball around, Setien’s troops hung on for dear life through an extra three minutes of stoppage time and etched out the 2-1 victory. On the cusp of the 90th minute, Messi came close with a curler seeming as though it was heading for the top corner.

Their goal difference inferior, the holders did not assume pole position but are level on points with Real Madrid for roughly 27-29 hours until they face Celta Vigo. That is unless there is an upset from the relegation-threatened Galicians, of course.

What The FDA’s Decision About Soy Leghemoglobin Means...

How To Produce A Really Bad Event On...