Breaking
Florida Supreme Court Tells The American Bar Association...
How to Write Perfect Paid Social Media Marketing...
How To Boost Productivity In Your Small IT...
How Restaurants Can Design a More Sustainable Food...
Expenses That Small Business Owners Need to Be...
How You Can Make Saying Goodbye To The...
Biden To Meet Royal Family At Cornwall’s Eden...
It’s Going To Be Emotional — Going International...
Peer Mentoring For Students: STEM & Buds
7 PR Trends in 2021: The Story So...
Google Plans Radical New Google Pixel Smartphone Upgrade
Where Did COVID Come From?
Ride To Growth With A Business Vehicle
C3.ai’s Tom Siebel: How To Scale AI
Moz Acquired by iContact Marketing Corp
10 Examples of Brands Using TikTok Stitch and...
Home Business Luxury Retailer Harrods Opens Discount Outlet To Drive Post-Pandemic Sales
Business 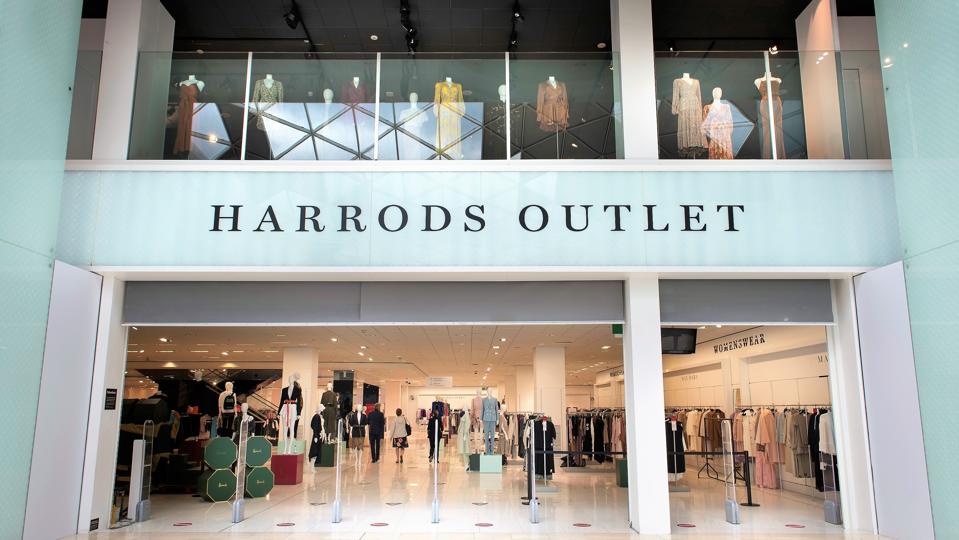 A new format: Harrods Outlet is a first for the world famous retailer.

One of the world’s most famous department stores, Harrods, has opened a large outlet marking the luxury retailer’s first flirtation with a price-led retail proposition. Average discounts are in the range of 40% to 60%.

The globally-recognized department store—which also has some airport units at London’s Heathrow and Gatwick airports and Hamad International Airport in Qatar—opened its first Harrods Outlet at the giant Westfield London shopping mall on Friday, with a line-up of 300 shoppers signalling its initial popularity.

Set over two of the four floors vacated by Debenhams—which appointed administrators in April—the outlet will sell excess stock from existing and previous seasons in a space that has made plenty of provision for social distancing due to Covid-19. The store will allow 365 customers to be inside at one time and this will be controlled using customer-counting technology.

Most non-essential shops including fashion retailers and department stores were able to reopen on June 15 in the U.K. Christophe Cuvillier, Group Chief Executive Officer of Westfield’s parent Unibail-Rodamco-Westfield said on social media: “What a fantastic way to celebrate the reopening of our flagship: this highly-anticipated launch will be a great novelty for existing customers, and will attract new visitors too.” 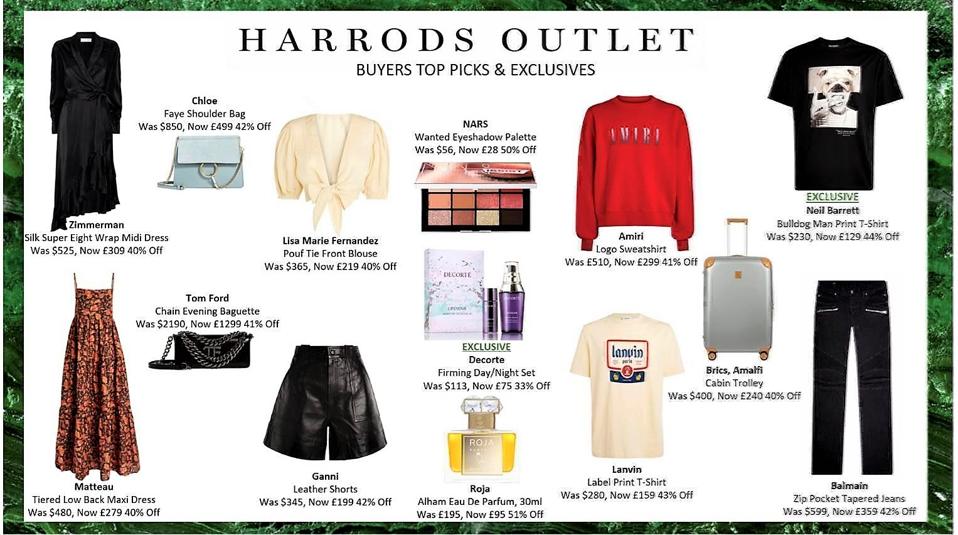 Cut-price: Some of the opening deals that are enticing brand-hungry shoppers.

Collections on display include womenswear, menswear, beauty, accessories, childrenswear and home. Harrods says the lines are an edit from its well-established twice-yearly Harrods sale. The summer sale started mid-June online and showcases a much wider selection of products than at the outlet.

By shifting sale stock to the new unit, Harrods will be able to free up space in its Knightsbridge store for a wider selection of new-season products, with almost no sale items present. In-store concessions will, however, be able to offer discounts as normal.

In a statement, Harrods said: “Harrods Outlet allows the business to adapt to changed circumstances and grow in undoubtedly challenging times for the economy.” The outlet is effectively an extended pop-up, leased for six months until December 31, time enough to decide whether the concept has longevity.

With the extra space at Westfield—one of the largest shopping centers in Europe—Harrods will be able to accommodate more shoppers safely at both its locations. It can also focus on bargain hunting shoppers at Harrods Outlet, leaving the flagship store staff to concentrate on the department store’s long list of big spenders. 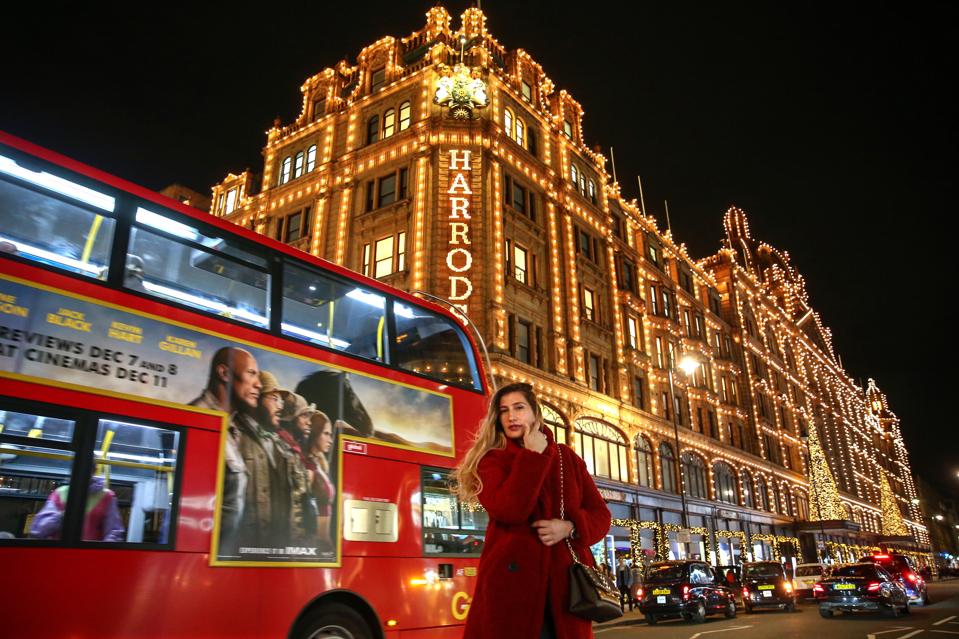 Harrods is not keen to make such a sharp distinction and points out that the Westfield experience is just the same as its flagship. A spokesperson told Forbes.com: “In the first few days of opening, the shoppers at Harrods Outlet have been a broad mix of customers.”

Lydia King, fashion director at Harrods, adds: “We are known for providing the ultimate in luxury, and the outlet offering will be no different. This comes from the strength of the edits available. Some of my picks in-store are Zimmerman’s silk wrap dresses, Lisa Marie Fernandez’s effortless essentials and chic swimwear from Matteau.”

Harrods Outlet is home to over 100 fashion and accessory brands and about 120,000 units of premium lines so that there is “something for everyone” says the retailer.

General manager at Westfield London, Jacinta Rowsell, comments: “Harrods Outlet is causing quite a stir with our customers. The store features brands that have never been available at the center before such as Stella McCartney, Chloe and Vetements, and weekly drops from Zimmerman, Missoni and more.” Other brands include Balmain, Off-White, Rick Owens, and Thom Browne in menswear, as well as accessories from Tom Ford and Loewe. 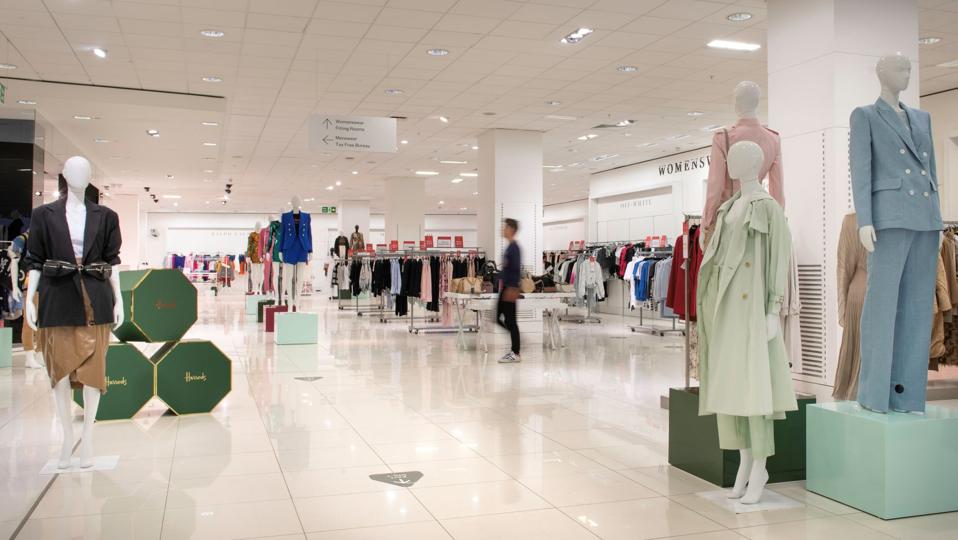 Spaced out: Harrods Outlet has made social distancing a priority.

On the beauty side, top-end labels include international and niche marques such as Bvlgari, Cartier, Chantecaille, Estée Lauder EL , Gucci Beauty, Roja Parfums and Shiseido. Annalise Fard, beauty, fine watches & jewellery and accessories director at Harrods, also expects luggage to move fast now that the U.K. has cleared the way to travel to 73 countries quarantine free.

She says: “As we start to look towards celebrating summer and planning trips, our customers have the opportunity to shop some of the most timeless luggage essentials. My favourites include Cellini’s Spinner Cases and the Amalfi Trolleys; perfect for car or cabin.”

Aside from the negative spectre of coronavirus on retail this year, Harrods was already on a revitalization path involving geographical diversification. Over the past year, the retailer announced it would transplant some of its core business out of the Knightsbridge flagship for the first time.

This is happening via concepts such as the first H Beauty store in the Intu Lakeside shopping mall, east of London in Essex; and the extension of Harrods personal shopping experience in Shanghai at ‘The Residence’, both of which are due to launch later this year. Intu Properties Plc and several group companies went into administration at the end of June due to the impact of the U.K. lockdown hitting rent payments, but its shopping centers are continuing to trade.

Why Branding Based On What You Want Is The Most Successful