Breaking
Florida Supreme Court Tells The American Bar Association...
How to Write Perfect Paid Social Media Marketing...
How To Boost Productivity In Your Small IT...
How Restaurants Can Design a More Sustainable Food...
Expenses That Small Business Owners Need to Be...
How You Can Make Saying Goodbye To The...
Biden To Meet Royal Family At Cornwall’s Eden...
It’s Going To Be Emotional — Going International...
Peer Mentoring For Students: STEM & Buds
7 PR Trends in 2021: The Story So...
Google Plans Radical New Google Pixel Smartphone Upgrade
Where Did COVID Come From?
Ride To Growth With A Business Vehicle
C3.ai’s Tom Siebel: How To Scale AI
Moz Acquired by iContact Marketing Corp
10 Examples of Brands Using TikTok Stitch and...
Home Technology Lyme Disease Vaccine Could Be Ready In 4 to 5 Years
Technology

Lyme Disease Vaccine Could Be Ready In 4 to 5 Years

Lyme disease is one of the fastest growing diseases in the northern hemisphere and this week’s announcement that pop star Justin Beiber had the diagnosis brought the tick-borne illness to the forefront of the news. For now, the main prevention lies in avoiding tick contact but one company, Valneva, is working fervently to develop what they believe will be the world’s first vaccine against Lyme’s disease.

Valneva’s has made a name for itself by developing vaccines for in-demand illnesses and now the biotech company has its eyes set on Lyme disease. Their Lyme disease vaccine prototype, VLA15 is currently in Phase 2 developments and is being tested on more than 800 people to measure both efficacy and safety. Although difficult to predict, Valneva’s CEO, Thomas Lingelbach told Forbes that he expected the vaccine to be completed in the next few years.

“Phase 2 will end in the middle of 2020. We expect this will enable us to enter the last clinical phase in mid-2021,” explained Lingelbach. “Depending on those results, we may be four to four and a half years away from the first potential Lyme disease vaccine.”

When completed, the vaccine will likely be administered in three doses, each a month apart. The initial vaccine is expected to last 6 seasons, referring to the time from spring to late summer when the ticks are active and therefore most likely to transfer the illness to humans. After six seasons, Lingelbach believes that boosters will be required, but will likely be needed to be administered every 2-3 seasons. 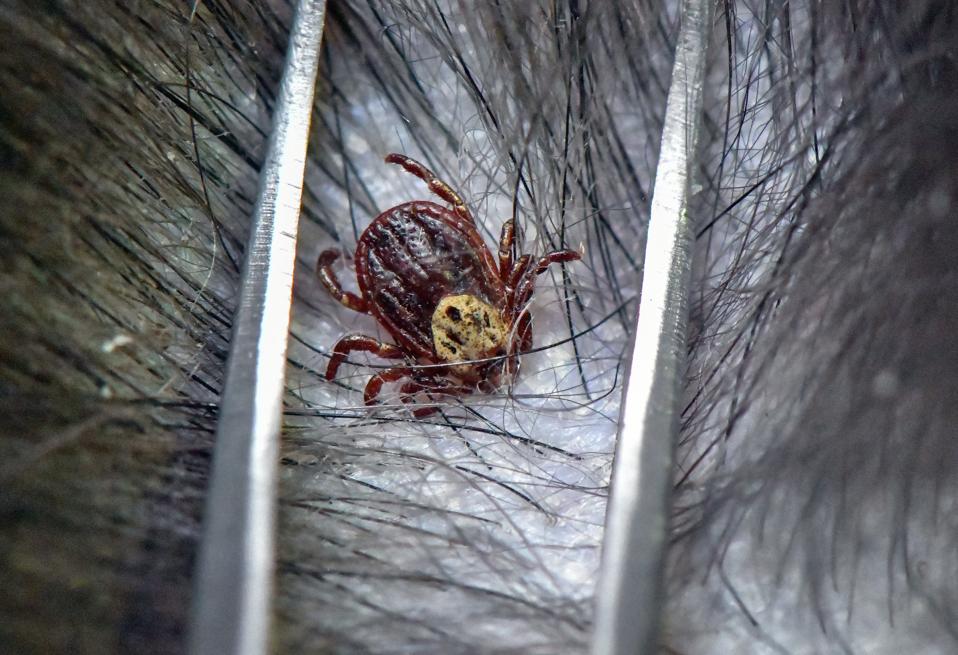 26 March 2019, Brandenburg, Sieversdorf: A tick has bitten its way into the skin of a dog. Photo: … [+] Patrick Pleul/dpa-Zentralbild/ZB (Photo by Patrick Pleul/picture alliance via Getty Images)

While Justin Beiber may have brought Lyme disease to the news this week, he is only one of a growing number of new diagnoses. Lyme disease is spread by ticks carrying the bacteria that cause the illness. The bacteria may pass to humans via a tick bite. For a number of reasons, ticks are spreading the disease to humans at higher rates than those in the past. However, according to Lingelbach, and many experts across the globe, climate change is one of the factors in this shift.

“Climate change has an impact on tick populations and the ticks are the main carrier of Lyme disease,” explained Lingelbach.

Typically Lyme disease peaks from spring to late summer, with most cases contracted during this time period. However, a warmer climate is extending the ticks’ peak period, thus extending the time in which they may pose a threat to human populations.

Lyme disease isn’t the only infectious disease that Valneva has its eye on curing. The biotech company is also in the midst of developing a vaccine for Chikungunya, a virus spread through mosquitoes that is particularly common in Africa, Asia and India, the Center for Disease Control and Prevention reports. There is currently no vaccine for Chikungunya, and Valneva also hopes to be the first to develop this drug as well. It may possibly be finished even sooner than a Lyme disease vaccine, Lingelbach explained.

Persuasion: How To Convince People To Act On Your Great Ideas