Breaking
How to Build a Sales Forecast Model
The Unexpected Ways COVID-19 Has Forever Changed What...
Google Posts: Conversion Factor — Not Ranking Factor
How To Bring Your Branding To Life
Coinbase Cofounders And Investors Poised To Rake In...
How To Stay Top-of-Mind For Your Audience With...
Employers: Eight Red Flags You May Not Notice...
The benefits of videoing in the automotive industry
Ted Lasso, Other Apple TV+ Shows Arriving Soon...
How To Incorporate Click And Collect Into Your...
What Are Working Capital Loans and When Should...
The 10 Biggest Trends in Entrepreneurship to Look...
Clubhouse Has Grown 10X In Two Months. Here’s...
Here’s Why Tyson Foods Stock Looks Undervalued At...
How To Maintain Client Relationships During Long Projects
WhatsApp Is Pushing Ahead With Its Controversial Privacy...
Home Technology Madden 21 Gameplay Info: Top Takeaways From Twitch Stream
Technology 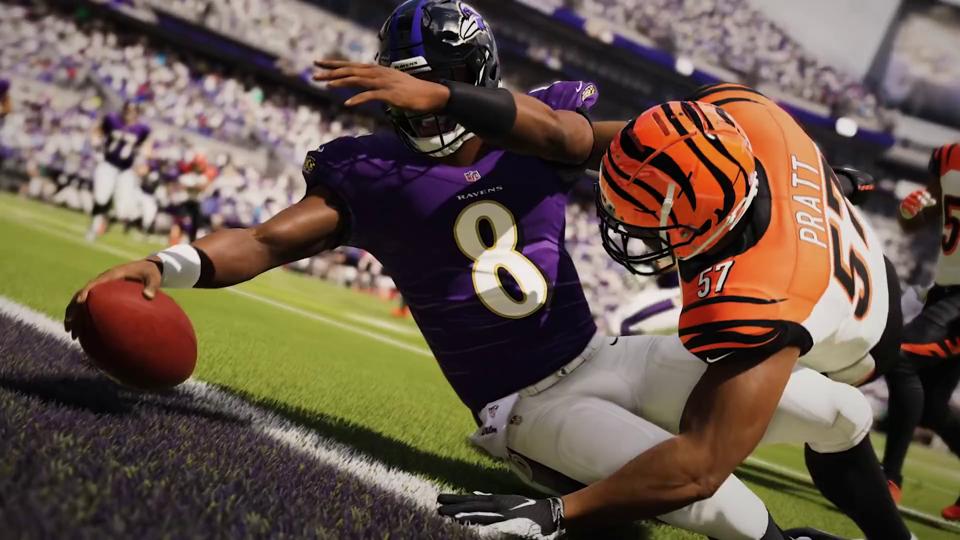 Thursday’s Twitch stream focused on the changes coming your way in gameplay from Madden 21. Most of it was for the more hardcore players, but if you watched, listened, and paid attention, there was some excellent information given that could make a major difference in gameplay.

Let’s take a look at the biggest takeaways from the 1-hour-long session.

According to the stream, a closed beta was originally supposed to begin on Thursday, but EA had to move it back. Now it will take place in the upcoming weeks, but there’s no information on when that will take place.

With many of the ball-carrier and defensive-line moves mapped to the right stick, screenshots that show the button mapping are especially important. Operation Sports captured and posted the new controls.

Per Madden developer Clint Oldenburg, these changes aren’t final. EA is interested in hearing the feedback from its users to determine if the ball-carrier moves will be moved back to the buttons.

There is no doubt more control can be had with the stick, and the moves can be far more natural with a more-defined skill gap. For those reasons, unless the execution is a complete failure, it would be in the best interest of the game to keep the skill moves on the right stick.

One of the most frustrating aspects of offensive gameplay in Madden is failing to get a pass off because the arm motion is too slow to beat the impact coming from a charging pass rusher.

According to Oldenburg, we will now see an expedited arm animation when a pass rusher is in close proximity to a QB. This quicker arm motion will allow users to properly react to their situation, but will also carry a realistic consequence.

The TUP (Throw Under Pressure) ratings will be ignited in these situations, which should limit the power and accuracy of the throw.

Also, QBs won’t automatically have throw animations canceled while they simply accept a sack. The outcome of the throw will be determined by how far into their throwing motion they are when contact is created. This can result in short, inaccurate passes, or even fumbles. In any case, the game won’t completely ignore the fact that I pushed one of the receiver’s assigned buttons.

This was easily my favorite part of the stream.

Changing the depths of zone coverage is a relatively simple adjustment defensive players and coaches make to take away an opponent’s use of a certain area of the field. In Madden, it’s been traditionally hard to do this, especially as it relates to slant routes and deep ins.

Based on what I took from the stream, new defensive adjustment mechanics that allow users to change their zone depth could be a huge counter for money plays and predictable tendencies from offensive players.

As Oldenburg mentioned, some of the stock formations had holes because they weren’t as flexible as they would be in real life. This should add some much needed flexibility on defense.

Lamar Jackson spammers best beware. The new OOP (Out of Position) fatigue factor aims to penalize people who overuse athletic players as ball carriers when it’s not their natural position.

For example, if you continue to scramble with Jackson, he will fatigue at an increasing rate which will result in more fumbles, decreased ratings (temporarily), and ultimately he may have to be subbed out for a time.

This is the list of consequences in competitive play, and with injuries off. However, when playing simulation, these potential problems come on top of also risking injury with a player not built to take jarring hits.

Setting the Edge and Gap-Fillers on Defense

Defensive players who are charged with getting outside the tackles and setting the edge, ultimately making a tackle or forcing a ball carrier back inside, will have a different placement by default, and should attack their responsibilities more intelligently.

Likewise, gap-filling defenders from the second level of the defense won’t get stuck in traffic as often, and will play with more intelligent aggressiveness to stay in position to fill the gaps as needed.

Certain animations and tackle types will generate depending on where a player is on the field. For example, a defender trying to stop a ball carrier from crossing the goaline or reaching the first down marker may have an animation that is designed to prevent their opponent from reaching out to place the ball forward.

The sidelines will have their own sets of tackles specific to that location as well.

My second favorite part of the stream came in Oldenburg’s explanation of the blocker memory and pass-protection resistance features. In Madden 21, offensive lineman will compile information on their primary blocking assignment through the game.

If you’ve been beating your guy to the outside consistently, he will build up a resistance, and begin to show more preparedness toward a rush that favors that side. If you move your defender to the other side of the line, he will have a clean slate with the offensive lineman on the opposite side.

Also, each pass rusher is given a budget of moves they can use each play. Their budget replenishes a bit after each play, with more regeneration after timeouts or with certain abilities, but it serves as a fatigue meter of sorts for each play, and I love the concept.

Thankfully, we’ll learn about franchise mode next. According to EA’s website, the unveiling of the Face of the Franchise and classic franchise will take place on June 30. That will be the most make-or-break piece of information on the game for many fans–myself included.

What Does EU Possible Ban On Americans Mean For Italy’s Struggling Tourism Sector?