Breaking
Expanding Your Business Into Spain: What You Need...
Essentials For Your Office Coming Out Of COVID-19
What Can Marketers Learn From Digital Cults?
Why NASA’s James Webb Space Telescope Will Never...
Increasing HR Effectivity and Efficiency through Software Solutions
The Difference Between Building A Startup In Bull...
Fluor Corp Ranked Among Today’s Top Shorts
Common Pitfalls to Look Out for When Buying...
Will the Olympics go ahead this year?
Pack Up the Big Top: Insights from MozCon...
Best WordPress Themes for Blogs
Get Ready To Rip And Tear, As The...
As Economy Recovers, Loan Approval Rates Increase For...
Lessons Learned—Avoiding The Fundraising Errors That Can Sink...
Top Tips to Help You Effectively Manage Your...
Malaysia’s Carsome, Tycoon Patrick Grove’s Catcha Group To...
Home Social Media Make No Mistake: Twitter Is Right, Trump Is Wrong
Social MediaTechnology 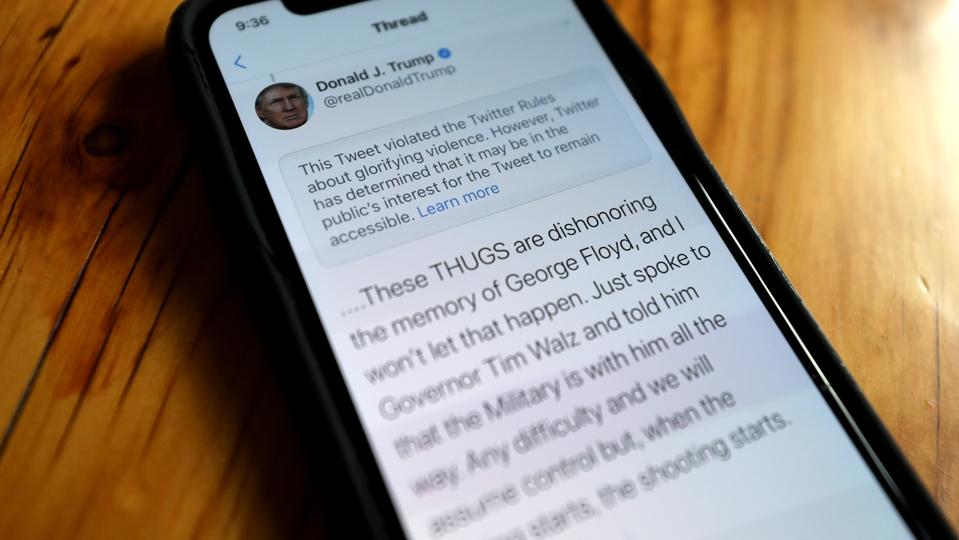 MAY 29: A notification from Twitter appears on tweet by U.S. President Donald Trump that the social … [+] media platform says violated its policy on May 29, 2020. Twitter has started to flag some of President Trump’s tweets that violate the company’s terms. (Photo by Justin Sullivan/Getty Images)

The Italian historian Carlo Maria Cipolla in his “Fundamental Laws on Human Stupidity” defines the stupid as “people who do evil to others without benefiting themselves.”

Cipolla died a decade and a half before the current president of the United States moved into the White House, but his definition of Donald Trump was prescient. Trump acting like a schoolyard bully surprises no one at this point, nor does his resorting to whatever it takes to benefit himself, either. Even less surprising is that his actions end up damaging himself. After all, we’re talking about the president who has made his country the world leader in terms of the number of people infected and killed by a pandemic, and who never ceases to boast about it. There is really very little to be said at this point about Donald Trump’s suitability for the position he holds, which he reached by dubious methods.

Does anyone really have any doubts about Twitter’s decision to add a “get the facts” verification link to Donald Trump’s insane tweet in which he attacked an electoral mechanism well used in democracies such as the vote-by-mail? A president attacking his own country’s democracy? And if he loses the election, what will he do? Claim that the result was rigged and refuse to leave the White House? No, that’s impossible and could never happen in the United States… oh, wait!

Does anyone really think that there can be any reasonable doubt about why Twitter acted in the face of another absolutely incomprehensible and anti-presidential tweet by Donald Trump? Does anyone really dispute the fact that the text glorifies violence, and even incites it? Actually, if anything can be blamed on Twitter for its response to those two tweets from Donald Trump it is not what it has done, but the failure to take action much, much earlier.

Trump’s reaction, like so many others he displayed before, characterizes his childish behavior. It’s very worrying that the president of the United States used a mechanism such as an executive order to satisfy a desire for revenge, although like so many other things this president has done, it is unfortunately not surprising. Using the White House to attack a department store for removing his daughter’s fashion collection? Slamming one of the United States’ biggest job creators? Threatening to press the nuclear button over an irrelevant character on the international scene? Have we really reached the point where anything goes in politics?

What will happen to the executive order signed by Trump? Is it really some kind of revenge against the very social networks his election depends on and on which he spends more money than anyone else? Let’s start by making it clear that the executive order is nothing more than a diversionary maneuver, a pathetic attempt to attack something, the First Amendment to the Constitution, which — fortunately — is well beyond the reach of Donald Trump. The executive order not only contains misspellings and misinterprets Section 230 of the Communications Decency Act, as one of its authors rightly points out, but it is also openly unconstitutional, and will have a short life. But it also starts from a mistaken assumption — that social networks silence conservative voices — and could backfire, instead causing social networks to remove a greater amount of content in order to protect themselves from possible lawsuits. By playing with fire, the “incontinent president” could end up shooting a large hole in his foot.

Even more worrying is the role played by one of the most irresponsible managers in history, Mark Zuckerberg, who claims that Twitter is wrong to label Trump’s tweets and that the company is trying to establish itself as the arbiter of truth. Let’s remember that Facebook does exactly the same thing as Twitter, even though it is desperate not to offend its main customer. Furthermore, Facebook is doing what Twitter is trying to prevent: to stir up division, polarization and confrontation far beyond the bounds of what is acceptable, even if that means endangering democracy and the lives of many people. Not even Facebook’s employees can agree with him. If there is anyone I have no interest in hearing about, it is Mark Zuckerberg.

This is one of those rare black and white situations: Twitter is the good guy and Donald Trump is just flat wrong. A company does what it can, possibly not enough, to make sure its platform is not misused. Donald Trump tries to inflame public opinion, polarize voters and undermine the electoral process in the United States, with the sole purpose of trying to win a second term in November. We need to understand that this is more important than ideology or partisanship. And in any case, Twitter was there long before Donald Trump came to the White House, and it will be there long after he has left.

Alessandro Michele’s Gucci Announcement: A Leap Towards Sustainability Or A First Step?

Today Should Be Wanamaker Organ Day 2020, But Macy’s Is Still Closed