Breaking
Everything You Need To Know About EMI Option...
Social Security’s Government Pension Offset (GPO)-A Common Sense...
5 Practical Tips for Small Businesses Going Through...
Part II: How To Optimize Product Ownership In...
How Zoom Conquered Video Conferencing
How To Meet Customer Expectations This Holiday Shopping...
A Technology Solution For Muni Bond Disclosure
Five Common Ways To Fund A Small Business...
Your Floss Pick Habit Is Killing The Planet,...
Customer Service Recovery: Six Keys To Turn Complaints...
10 Unique Habits To Positively Impact Your Productivity
How Becoming A Learning Organization Is Key To...
IRS Increases Enforcement On Cryptocurrency: What This Means...
Optimus Prime Finally Gets The Diaclone Update He...
No, There Isn’t A Black Hole At The...
The Fed Could Be Repeating This Key Mistake...
Home Business Manchester City Will Have Their Best Chance Yet To Sign Lionel Messi This Summer
Business 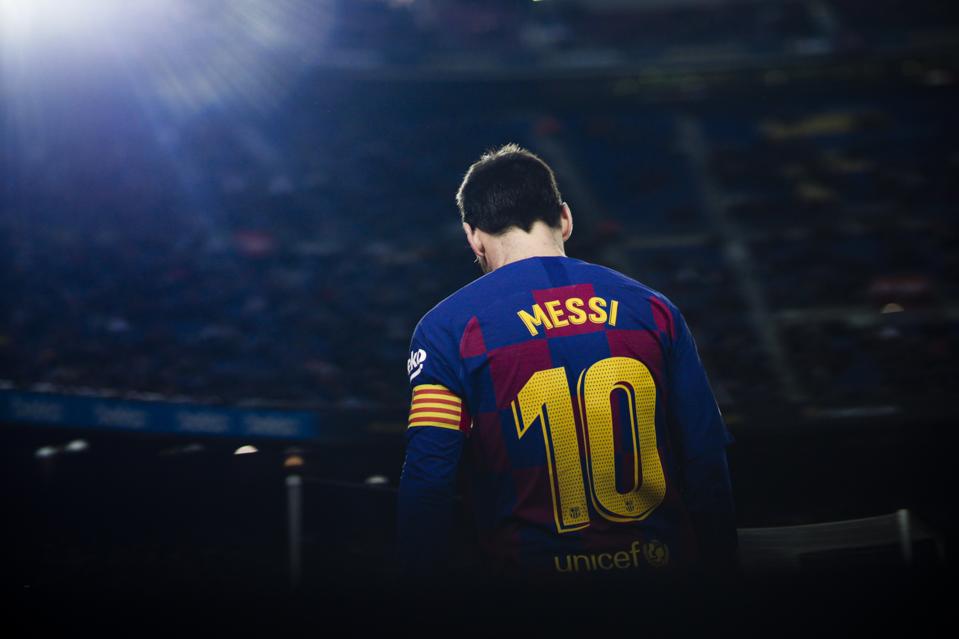 10 Lionel Messi from Argentina of FC Barcelona during the La Liga match between FC Barcelona and … [+] Levante UD at Camp Nou on February 02, 2020 in Barcelona, Spain. (Photo by Xavier Bonilla/NurPhoto via Getty Images)

They said Xavi Hernandez would never play for another club. The same thing was frequently said about Andres Iniesta, a similarly legendary figure of the Camp Nou club. These were players who came to define an entire era of the European game and they did so as Barcelona players. It was impossible to envisage them in anything other than Blaugrana and yet both Iniesta and Xavi went on to play for different clubs towards the end of their careers.

Nobody, not even Iniesta or Xavi, has set the zeitgeist for an entire generation like Lionel Messi, though. He is, by the measure of most, the greatest football player of all time, an icon who will likely supersede even Johan Cruyff as the face of FC Barcelona once he retires. There isn’t a player in the game today who holds a club so tightly in his grasp as Messi does with Barca.

That’s what makes this week’s very public fallout between Messi and the Camp Nou club’s sporting direct, and former teammate of the Argentine, Eric Abidal so significant. Messi has long been used as something of a political pawn by those seeking control at Barcelona and with the current regime facing serious questions over their guidance of the club it’s feasible that the 32-year-old might look elsewhere. 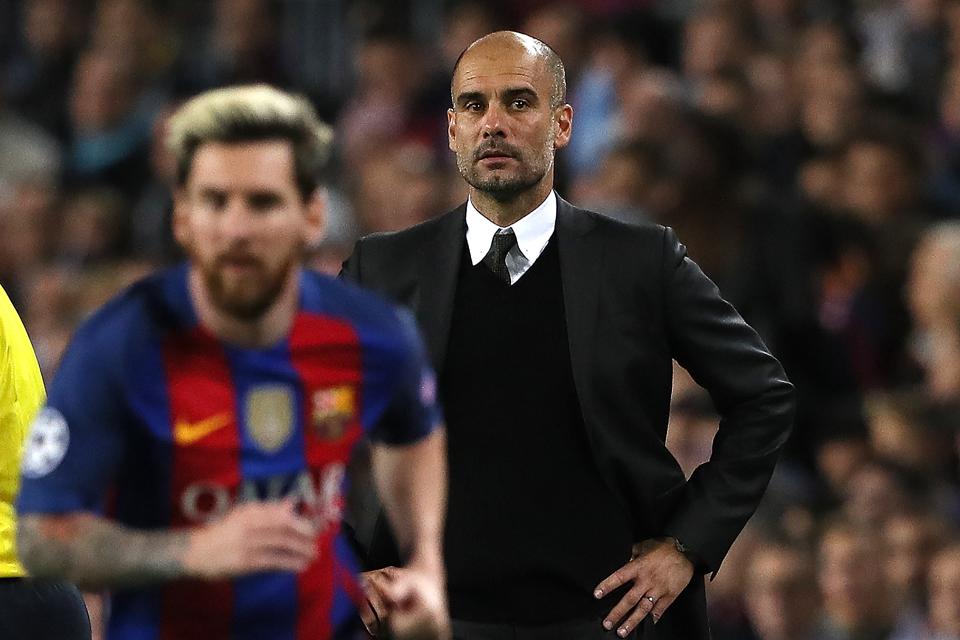 The possibility of this is heightened even further by the existence of a clause in Messi’s contract which will allow him to unilaterally leave Barca at the end of the season. If the Argentine is genuinely considering options away from the Camp Nou, as has been tentatively suggested a number of times over the past few years, then the greatest transfer market pursuit in footballing history might be about to be sparked.

Pep Guardiola is surely keeping his ear to the ground. He is, after all, the manager who boasted the strongest understanding with Messi during his time at Barcelona. To this day, Guardiola still frequently references working with Messi as the privilege of his career. It’s reasonable to assume the Manchester City boss would relish the opportunity to coach him again.

Once a pipe dream, City might now have a shot at landing Messi. They are one of the few clubs in the game right now who could afford £500,000-a-week wages and in Guardiola, as well as Txiki Txiki Begiristain and Ferran Soriano, there is a group of friends and former Barcelona colleagues to lure the Argentine to the Etihad Stadium. 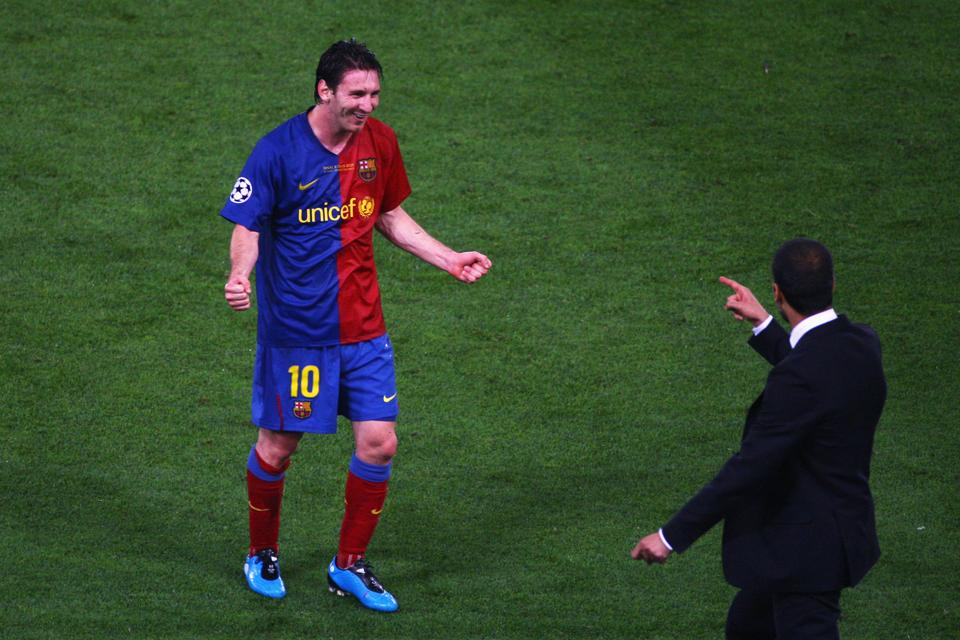 ROME – MAY 27: Lionel Messi of Barcelona celebrates with his coach, Josep Guardiola after Barcelona … [+] won 2-0 during the UEFA Champions League Final match between Barcelona and Manchester United at the Stadio Olimpico on May 27, 2009 in Rome, Italy. (Photo by Paul Gilham/Getty Images)

What’s more, the signing of Messi would be one way for City to ensure Guardiola remains at the club. The Catalan coach also appears to be approaching something of a crossroads. He must soon make a decision on whether to seek a new challenge or build a new team at Man City. Messi’s arrival would certainly help with the latter.

It’s difficult to imagine where else Messi could pitch up. A move to Real Madrid would destroy his legacy at Barca while Manchester United, certainly rich enough to afford him, are to be avoided at this point in time. Bayern Munich might appeal, but Juventus already have a certain Cristiano Ronaldo on their books. A Messi-Ronaldo union might be the dream of football fantasists, but it seems unlikely to ever happen, for financial reasons as much as anything else.

Of course, both Iniesta and Xavi left Barcelona to take on a new challenge in a less established league, with the former moving to Japan and the latter heading to Qatar. Messi could do something similar and has long been tipped for a move to MLS, but at 32 he still has far too much to offer the European game right now. That sort of transfer can come later.

Most likely, Messi will stay at Barcelona. With presidential elections taking place next year, it’s possible that a change in boardroom control could usher in a new age at the Camp Nou. Nonetheless, this summer presents Messi with something of a career crossroads. One signpost is pointed in Guardiola and Man City’s direction.