Breaking
Florida Supreme Court Tells The American Bar Association...
How to Write Perfect Paid Social Media Marketing...
How To Boost Productivity In Your Small IT...
How Restaurants Can Design a More Sustainable Food...
Expenses That Small Business Owners Need to Be...
How You Can Make Saying Goodbye To The...
Biden To Meet Royal Family At Cornwall’s Eden...
It’s Going To Be Emotional — Going International...
Peer Mentoring For Students: STEM & Buds
7 PR Trends in 2021: The Story So...
Google Plans Radical New Google Pixel Smartphone Upgrade
Where Did COVID Come From?
Ride To Growth With A Business Vehicle
C3.ai’s Tom Siebel: How To Scale AI
Moz Acquired by iContact Marketing Corp
10 Examples of Brands Using TikTok Stitch and...
Home Business Manchester United Cannot Hide The Gulf Between Them and Liverpool
Business

Manchester United Cannot Hide The Gulf Between Them and Liverpool 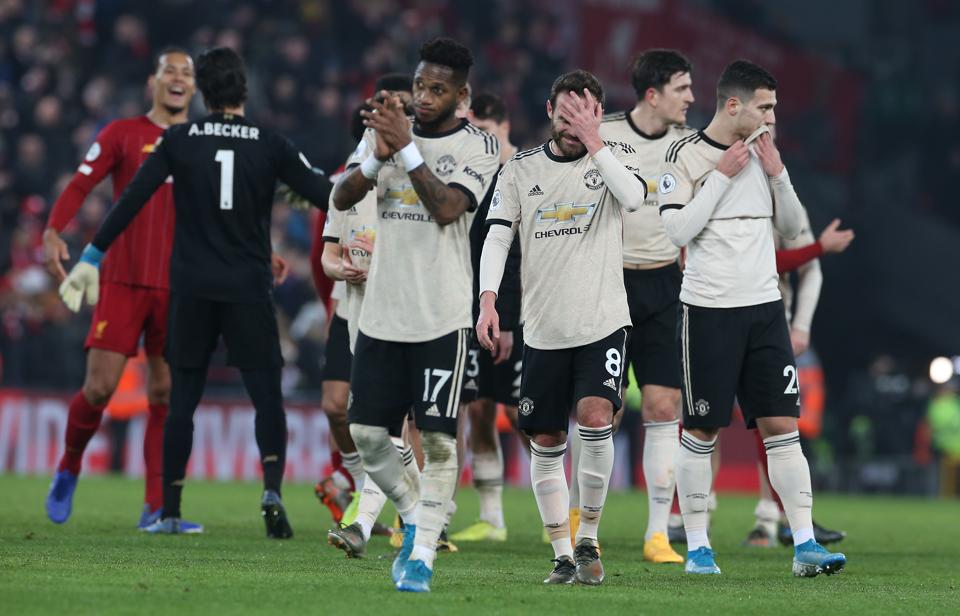 The former Manchester United manager Sir Alex Ferguson always said he signed new players for the club on the basis of how he thought they would perform against Liverpool at Anfield.

This fixture has always been the ultimate test for United, and tends to reveal whether players have the character and ability to thrive for them.

And so United’s 2-0 capitulation to Liverpool at a gleeful Anfield on Sunday only served to provide more proof that the current team are staffed with too many players who are simply not good enough.

It has been obvious throughout most of this stumbling season, but this defeat, their seventh in the Premier League, only confirmed it.

These players tried their best at Anfield, but the harsh truth is they really don’t have it in them to compete with a team of Liverpool’s overwhelming quality.

“The players have given us everything,” said the United manager Ole Gunnar Solskjaer after the game, which was meant to be a compliment. 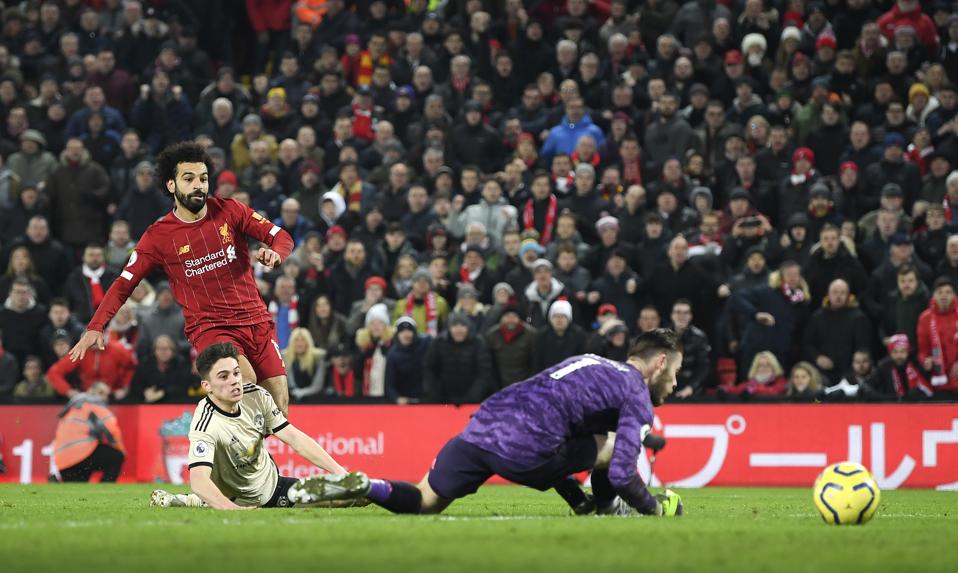 It felt wrong to berate these players for they had nothing more to give, and however hard that might be for United fans to hear, there is no way to hide from it.

Just like the chant of “And now you’re going to believe us…we’re going to win the league,” Liverpool’s fans crowed at the final whistle. The truth hurts.

It is still January, and yet Liverpool are now 16 points clear of second-placed Manchester City at the top of the Premier League, and still have a game in hand.

Liverpool are unbeaten in the league since January 2019, and have won an incredible 21 out of 22 games this season.

With the Premier League title virtually secure, the aim of Jurgen Klopp’s side must now be to remain unbeaten throughout this season.

Meanwhile United’s aims remain rather more modest: haul themselves in to the top four, and hope to win one of the three cup competitions they remain in. 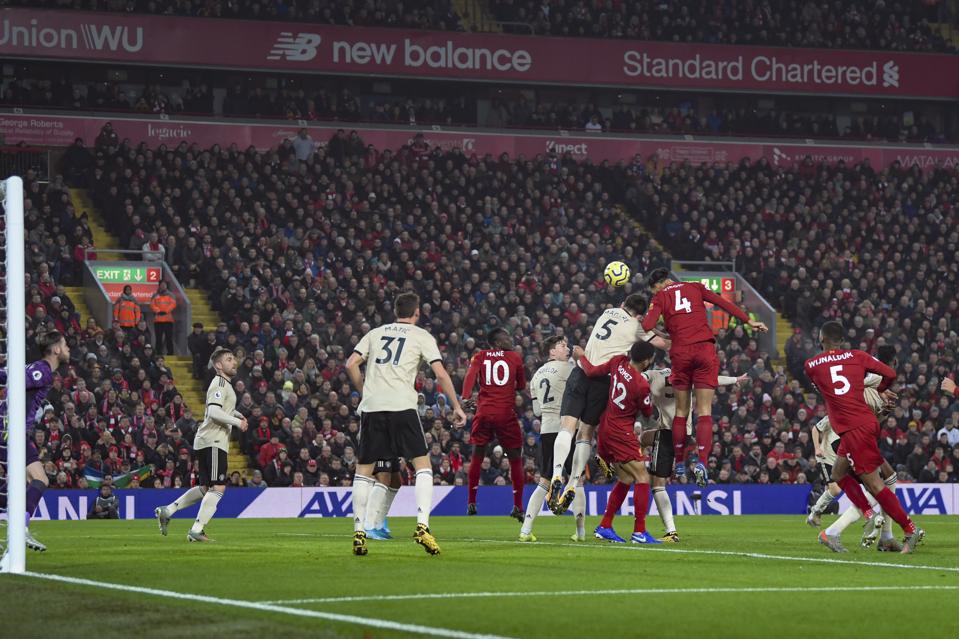 LIVERPOOL, ENGLAND – JANUARY 19: Virgil van Dijk of Liverpool scores to make it 1-0 during the … [+] Premier League match between Liverpool FC and Manchester United at Anfield on January 19, 2020 in Liverpool, United Kingdom. (Photo by Michael Regan/Getty Images)

They will have to do it without their best player so far this season, Marcus Rashford, who will miss the next three months with a serious back injury.

In his absence United actually made a promising start at Anfield, but as soon as they fell behind to Virgil van Dijk’s goal after 14 minutes, they struggled to assert themselves and prevent Liverpool from taking an even bigger lead.

It was only the intervention of VAR wiping off two further first half goals from Roberto Firmino and Georginio Wijnaldum that kept United in the game.

In just the first 10 minutes of the second half Liverpool had seven attempts at goal as they poured forward in an attempt to kill off the game, but that second goal would not come.

In the dying minutes of the game, surprised that they were still alive, an emboldened United sensed they might still grasp something from the game.

But it was to be in vain as in the final minute of added time Mo Salah latched on to a quick goal kick from Alisson, shrugged off Daniel James and fired a low shot beneath David De Gea to confirm another three points. 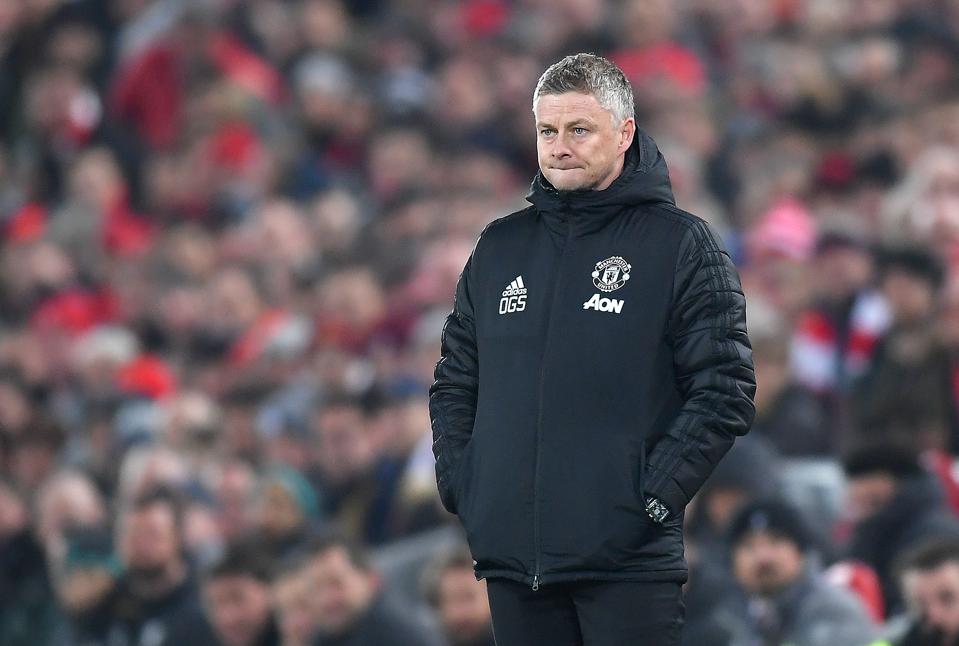 As Liverpool began their title winning celebrations four months before they actually lift the Premier League trophy, United were left to trudge off the field and contemplate their own sorry state.

In his post-match television interview Solskjaer spouted embarrassing talk about having seen “lots of positives.”

It was his attempt to create a narrative that United had competed in the game, kept Liverpool at bay most of the time, and avoided an even worse defeat.

But such desperate talk only highlights how far United have fallen this season.

There is a gulf between these two rivals at the moment, neatly reflected in the barely believable 30 points that separate them in the table.

This United squad doesn’t boast nearly enough players capable of clawing back that embarrassing points gap any time in the near future.

It is now imperative Solskjaer follows the example of his mentor Ferguson and quickly finds and nurtures players who can thrive, and not shrink, at Anfield.