Breaking
Florida Supreme Court Tells The American Bar Association...
How to Write Perfect Paid Social Media Marketing...
How To Boost Productivity In Your Small IT...
How Restaurants Can Design a More Sustainable Food...
Expenses That Small Business Owners Need to Be...
How You Can Make Saying Goodbye To The...
Biden To Meet Royal Family At Cornwall’s Eden...
It’s Going To Be Emotional — Going International...
Peer Mentoring For Students: STEM & Buds
7 PR Trends in 2021: The Story So...
Google Plans Radical New Google Pixel Smartphone Upgrade
Where Did COVID Come From?
Ride To Growth With A Business Vehicle
C3.ai’s Tom Siebel: How To Scale AI
Moz Acquired by iContact Marketing Corp
10 Examples of Brands Using TikTok Stitch and...
Home Business Manny Pacquiao Won’t Be Fighting Mikey Garcia And Here’s Why
Business 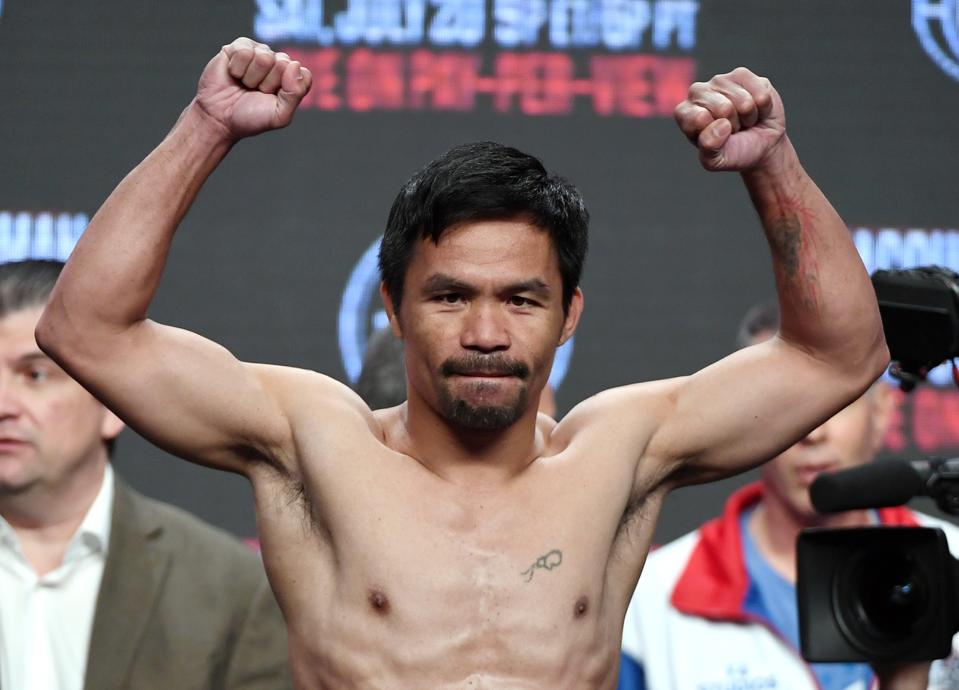 Manny Pacquiao isn’t likely to fight Mikey Garcia in Saudi Arabia and it doesn’t look like he’ll fight him at all.

It has been almost eight months since Pacquiao has last fought. After defeating Keith Thurman on July 20, 2019, at the MGM Grand Garden Arena in Las Vegas, it seemed the then 40-year-old Pacquiao was on a roll coming off a three-fight win streak having defeated Thurman, Adrien Broner and Lucas Matthysse in just over a 12-month span. If we can agree that the Jeff Horn loss was controversial, then an argument can be made that Pacquiao hasn’t lost since losing to Floyd Mayweather Jr in 2015. There has been a lot of speculation as to who the now 41-year-old, Filipino, having competed in four decades and only eight weight class world champion in history would be facing next including Garcia.

Back in September, even I felt that Pacquiao would be facing Garcia next in what I called a dead-end fight. I have now changed my feelings on this fight being possible, despite what others are reporting in the media.

Since then, there has been a lot of social media chatter, but not a lot of confirmation regarding Pacquiao’s next opponent.

There was talk of Pacquiao possibly fighting UFC star Conor McGregor after Pacquiao having signed with Audie Attar and Paradigm Sports Management, the same company that represents McGregor, with Pacquiao issuing the following statement as part of a press release on February 11.

“I am proud to partner with Paradigm Sports Management and am excited for the opportunities that [Paradigm president and CEO] Audie Attar and PSM have to offer, one thing I want everyone to remember is to always think positively. Never think negatively; that is the beginning of your downfall. Everything is possible.”

What I find interesting is that since that announcement on February 11, we haven’t heard anything else from Pacquiao or Paradigm Sports Management regarding the relationship and what’s next for Pacquiao. If things keep moving at this pace, the Filipino Senator could be looking at a year of inactivity and could constitute the WBA stripping him of his regular title, not that it’s going to matter in the grand scheme of things, although very unlikely considering Pacquiao’s status and the fact that July 11 has been mentioned as a possible date. Literally a week shy of one year out of the ring.

Enter Eddie Hearn and Matchroom Boxing who promoted the Mikey Garcia vs. Jessie Vargas fight last Saturday in Texas. According to The Athletic’s Mike Coppinger, Hearn has expressed that he’s in talks with Pacquiao to stage a Pacquiao vs. Garcia fight in July in Saudi Arabia.

What I suspect is as follows. Pacquiao will be facing either Danny Garcia, Shawn Porter or Amir Khan in July on a PBC and MP Promotions fight card. If Pacquiao wants to fight in Saudi Arabia, he can cut his own deal. He doesn’t need Eddie Hearn to be a middle man to make his own deal and cut himself in for a fee. The last time we heard Hearn was close to making a deal with Pacquiao, we woke up to learn Pacquiao entered into a relationship with PBC.

Furthermore, everything we’re hearing about Pacquiao’s working relationship with Al Haymon and PBC is purely speculation. Neither Pacquiao nor PBC have commented on it. With that being said, I’m under the assumption they will continue to work together unless we hear otherwise, directly from either Pacquiao or PBC.

At this stage of Pacquiao’s career, father time is his most dangerous opponent. Is a McGregor matchup possible? Sure it is, however more likely when Pacquiao is done fighting real boxing matches and looking for one last payday.

Until then, I suspect by the middle of March, a formal announcement will be made regarding Pacquiao’s next opponent. Although this is boxing and nothing would surprise me.

Can Manchester United Sneak Into A Top Four Position?