Breaking
Think Small: Timely Picks To Capture The Reawakening...
Patient Gets Covid-19 Swab Lodged In Her Lung...
Nine Signs You’re Not Being Effective During Your...
Chromebooks Can Now Run Windows 10 – Find...
Will Biden’s Tax/Benefit Plans Help/Hurt You And The...
This Fashion Brand Turned A Stripe Into A...
Shots In The Dark: Why Access To A...
What Building Wealth Really Takes In Business
Building A Circular Economy In New York City...
How To Cast Your Vote Against Election Scams
New Science On Stress: Feeling Your Feelings Works...
Why Now Is The Right Time To Acquire...
7 Obstacles That Prevent People From Starting Businesses...
Booking Holdings Falls; Likely To Remain A Risky...
Apple iPhone Crushes Samsung Galaxy In Important New...
Shape And Hold: How A British Entrepreneur Took...
Home Business Maria Sharapova’s Legacy
Business 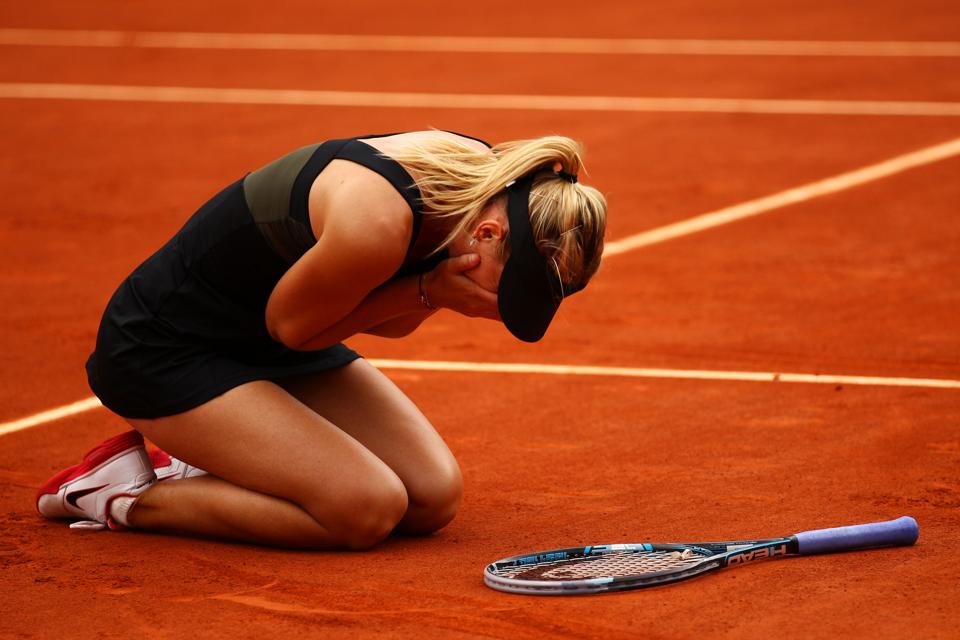 Clenched fist, true grit: there will never be another Maria Sharapova.

One of only seven women to win all four majors at least once in the Open era, Sharapova’s retirement due to injuries not only robs tennis of one of its the fiercest competitors but also of one of the world’s most recognizable female athletes who transcended her sport and opened tennis up to new markets.

One of the most ferocious baseliners in the women’s game, with a game built around aggressive ground strokes and mental strength, Sharapova won 36 career titles, including five majors, an Olympic silver medal, held the No. 1 ranking for 21 weeks and amassed $38 million in prize money.

But after 28 years of playing tennis, Sharapova’s body can no longer deal with competing at the highest level, she told the New York Times in an interview this week.

One of Sharapova’s biggest assets was her never-say-die attitude, laser-like focus and work ethic, both on and off the court, which has inspired generations of young tennis players.

“She’s great fighter. As dedicated as someone can really be in our sport,” top-ranked Novak Djokovic told reporters in Dubai after he heard the news.

“Maria, you inspired millions of people with your passion for the game and we thank you for that,” rising Russian star Karen Khachanov wrote on Twitter. “You have set an example for everybody in many ways. Humble, determined and a true champion.”

Just 17, Sharapova had become a global star virtually overnight when she defeated then two-time champion Serena Williams of the U.S. in the finals of Wimbledon in 2004. A year later, Sharapova rose to the No. 1 ranking, the first woman from Russia to do so.

Her defeat of Serena Williams on Centre Court turned Sharapova into one of the world’s most famous sportswomen, who would end up rewriting the rules about sports marketing and female athletes. She amassed more than $325 million in earnings, both on and off the court, during her career, according to FORBES.

“From the day Maria Sharapova won her first Wimbledon at age 17, she has been a great champion,” WTA Tour co-founder Billie JeanKing, who first met the Russian when she was 13, said on Twitter. “A 5x major champion and a former World No. 1, her business success is just as impressive as her tennis achievements.”

Guided by her long-time agent at management agency IMG, Max Eisenbud, Sharapova bcame a global fashion and style icon, whose business empire not only included a string of endorsements with blue-chip companies including Tag Heuer, Porsche, Evian and Avon but also a successful candy and chocolate line founded in 2012, Sugarpova. She was ranked as the world’s top-paid female athlete for 11 straight years by FORBES.

Mastering the slow red clay of Roland-Garros in 2012 and 2014, where she once famously compared herself to “a cow on ice” was perhaps her greatest achievement on a tennis court. Her first French Open victory came three years after a potentially career-ending shoulder injury which required surgery on a torn rotator cuff.

Sharapova’s rise to the top having escaped the aftermath of a nuclear disaster in the former Soviet Union was nothing short of remarkable.

Sharapova was born 19 April, 1987 in Nyagan, western Siberia, not long after her parents, Yuri and Yelena, moved to the remote oil town from their hometown of Gomel, Belarus to escape the fall-out from the nearby Chernobyl nuclear disaster in 1986. Two years later, the family moved to the Black Sea resort of Sochi, where Sharapova started playing tennis at the age of four.

Eightteen-time major winner Martina Navratilova spotted the talented Maria a year later at an event in Moscow, and advised her father to move the family to the U.S. 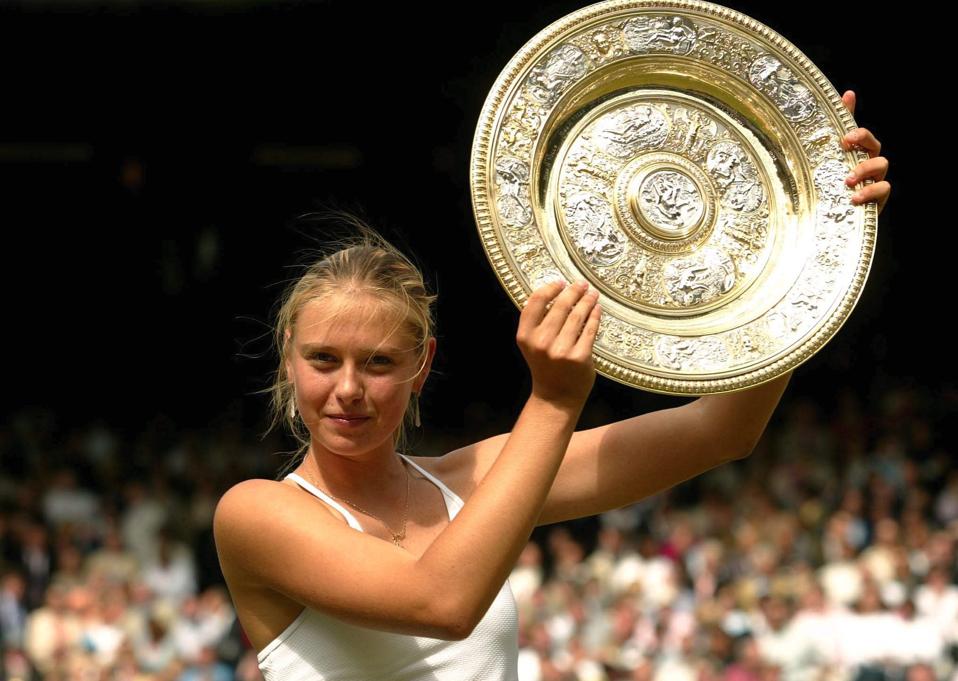 Sharapova with the 2004 Wimbledon trophy, which would turn her into one of the world’s wealthiest … [+] athletes. (Photo: Bongarts/Bongarts/Getty Images)

This was easier said than done. Maria and Yuri moved to the U.S. in 1994, but had to leave Yelena behind for two years because of visa restriction issues and lack of money. But Maria was only seven years old, and deemed too young to start training at a tennis academy. For the next two years, her father worked low-paid jobs in construction to pay for her coaching. When Maria was nine, the family were finally reunited and she earned a $30,000 scholarship to train at the Nick Bollettieri Academy in Florida.

Although Sharapova would also beat Williams at the 2004 WTA Finals, her rivalry with the now 23-time major singles winner was lopsided, with the former top-ranked American taking 20 matches in a row after that year.

The legacy Sharapova leaves behind is in some ways an unfinished one. Struggling with a shoulder injury and imflammation in both forearms, Sharapova told the New York Times she had been in pain for much of the past two years, as she made a comeback to tennis following a 15-month ban for taking the banned substance meldonium in 2016.

Her body left her unable to reach the same heights as before her shock admission in March 2016 that she had failed a doping test after failing to notice the drug in question had been banned at the start of that year by the World Anti-Doping Agency. An initial two-year ban was eventually reduced to 15 months, with the highest sports court, CAS, saying the former world No. 1 wasn’t an “intentional doper.” 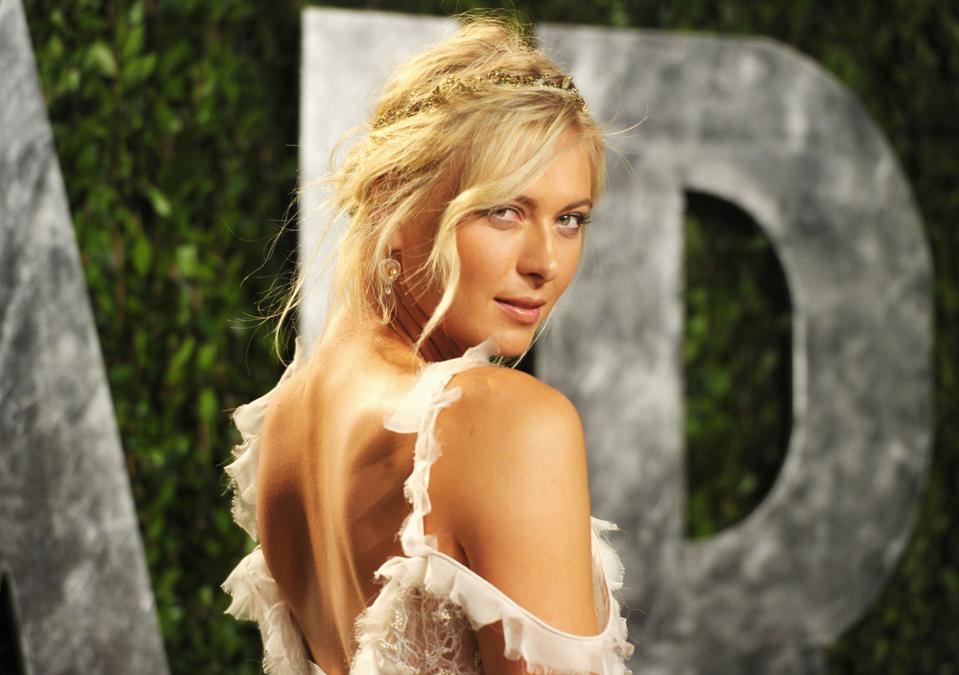 Ironically, the doping ban would in fact end up extending Sharapova’s career by a few more years.

“If (the suspension) didn’t happen, this probably would have been her last year,” IMG’s Eisenbud told CNN in a phone interview in 2017.

Before the doping suspension, Sharapova had been struggling with multiple injuries. “Her body was in bad shape,” Eisenbud said.

Although Eisenbud had been planning for Sharapova’s retirement for years, with the Sugarpova brand and other deals in place for when her career would eventually finish, and a stint at Harvard Business School and an internship at the NBA during her ban, no longer being a professional tennis player may take some getting used to.

When asked if closing a business deal was similar to winning competing for major tennis titles, Sharapova said in an interview in 2018:  “Everything that you put into it previously, you have to pour out onto the court, every fear that you’ve faced before, you have to bring out onto the court. You have to be powerful, but yet you have to handle being vulnerable at moments when things don’t go your way.

That, I don’t know if I will ever have that feeling when I am being a businesswoman, because it is just an experience that is so unique, and that’s why I still continue to do this, because I have that passion of figuring things out and getting it done, whether it’s a tough day, or whether it’s a great day.”

In an exclusive essay announcing her retirement for Vogue and Vanity Fair, Sharapova said: “Looking back now, I realize that tennis has been my mountain. My path has been filled with valleys and detours, but the views from its peak were incredible. After 28 years and five Grand Slam titles, though, I’m ready to scale another mountain—to compete on a different type of terrain.”

Meet 54Gene: Changing The Landscape Of Global DNA By Including Africa